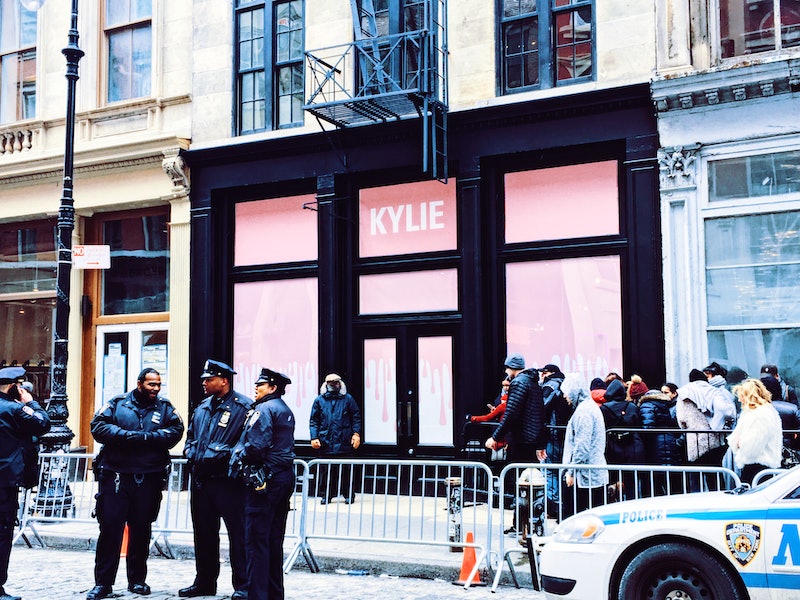 Freezing to death in the name of lipstick? Sleeping on sidewalks? General madness? Blame everything on Kylie Jenner — or to be more specific, the opening of the Kylie Shop NYC pop-up. NYC is already tough enough to navigate on its own, but mix in makeup-hungry mobs, 30 degree weather and the chance to potentially sneak a selfie with King Kylie herself and you've got the plot for a Hunger Games-esque film franchise. May the odds be in your favor — for nabbing a Lip Kit, that is.

From diehard Jenner devotees to curious tourists, 27 Mercer Street suddenly became the city's hottest address when the shop opened on Feb. 13. At noon, I arrived at the pop-up, which was a fatal mistake — I was greeted by masses of people and barricades. The line spanned several blocks, a Top 40 song blared from the storefront and everyone had a look that translated loosely to "I need sunshine and 20 shots of espresso".

Security was strictly monitoring the line. It appeared that only about 20 people were allowed into the store at a time, and they proudly wore the badge of survival: the red "Kylie" wristband that ensured access into the store itself. The glossy white Kylie Cosmetics shopping bags were the ultimate symbol of perseverance, since they indicated that the person carrying them actually made it to the check-out line inside.

The general tone of the line was not optimistic. There was a lone girl chanting "Kylie." Every time a black car pulled up nearby, there was unspoken tension in the air — Was Kylie finally here? (I read later that Jenner arrived around three p.m.)

After hanging around for two hours and casually losing sensation in my toes and fingers, I decided to call it quits with no Jenner sighting or Lip Kit in my possession. But spending my Monday afternoon at the pop-up made for some interesting discoveries.

1. The Lines Were Madness

While you were most likely sleeping in Saturday morning, courageous Jenner enthusiasts were camped out in SoHo — a good two days before the pop-up even opened on Monday morning. Casual fans like me didn't stand a chance.

I spoke to Brenda and Rocendo, two people who were in line since 3 p.m. Sunday and left the store at around 1 p.m. Monday. "It was a good environment, but I wanted to go home. [In the end] I'm happy, but they should have just organized [the line] better," Brenda told me.

2. Pia Mia Made An Appearance

"1:24 PM: important blonde girl arrives," I jotted down on my phone. I later learned that Important Blonde Girl was actually Pia Mia, Jenner's close friend and an up-and-coming songstress.

3. A Camera Crew Showed Up, Naturally

There was a camera crew filming customers entering and exiting the store, as well as the people waiting in line. A future episode of Keeping Up With The Kardashians in the making? Or perhaps general promo material for Kylie Cosmetics? Either way, the pop-up was one giant photo opp.

It was comforting to know that even amidst all the frenzy, people were incredibly welcoming. You could strike up a conversation with anyone and not feel intrusive. Everyone was there to bond over liquid lipstick and Kardashian/Jenner gossip. I spent most of the time chatting with Yayli, the girl next to me, and another girl, Jessica, eventually joined us to dish about Kylie Cosmetics. They were itching to get the Kylie's Diary Palette and the True Brown K Lip Kit, respectively. "I'll be mad if I leave and Kylie shows up," Jessica told me. "I'd be hyped to see her but I wouldn't be like crying."

Since the inception of Kylie Cosmetics in 2015, the makeup realm has not been the same. Honestly, I cannot think of another celebrity figure who has reaped the same amount of hype and mania over makeup products — at least, certainly not on the level where fans are camped out in NYC rain and wind for liquid lipsticks and a blurry three-second Snapchat of Jenner herself.

It's safe to say that when I'm seventy and my future grandchildren are asking what life was like in 2017, I'd simply just tell them about the grand saga of standing in line for the Kylie Shop pop-up.