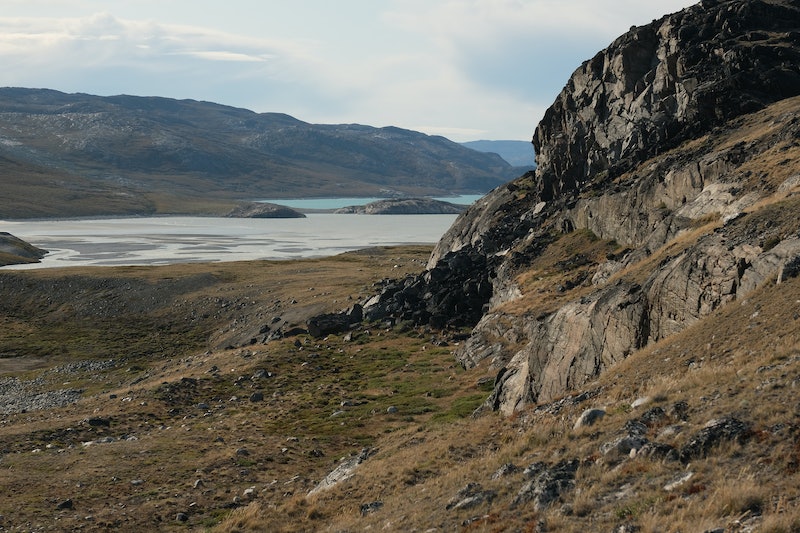 On Aug. 18, a group of climate activists and politicians gathered in Iceland to memorialize a massive ecological loss. According to NBC News, the Okjokull glacier is Iceland’s first glacier to be lost to the climate crisis. So, organizers held a funeral service for the glacier, complete with a speeches, poems, a death certificate, and a memorial plaque. Organizers and a mental health professional tell Bustle that rituals like these may not only help people address climate grief, but it could also help spur them to take action on the climate crisis.

Although Okjokull — now just named “Ok,” which omits the Icelandic word for glacier — is the first of Iceland’s glaciers to melt entirely. With rising temperatures increasing, Icelandic geologist Oddur Sigurðsson told NBC news that he predicts all of Iceland’s glaciers will be gone in the next 200 years as a result of climate change caused by human activity.

Because of this, the plaque includes a grim, yet hopeful, message for future generations that will be impacted by the climate crisis. "In the next 200 years all our glaciers are expected to follow the same path. This monument is to acknowledge that we know what is happening and what needs to be done. Only you know if we did it,” the plaque reads.

Events like the disappearance of this glacier contribute to climate grief, or feelings of despair, hopelessness, or anger over the continuing ecological destruction and the risks it poses to human life. And memorializing these losses as you would other kinds of loss can be an important tool for healing.

“A ritual like the memorial plaque for a lost glacier helps with climate grief in two ways," Dr. Dominic Boyer, PhD, a funeral organizer, professor of anthropology at Rice University, and co-director of the Film Not Ok, which details the melting of the glacier, tells Bustle. "It gives people a chance to be present for a loss instead of repressing their grief.”

People may repress their climate grief because they worry they’re alone in those feelings, but in reality, many people need space to mourn the ecological devastation that threatens human life and health.

Boyer says these rituals also create "a community of grievers that is also a source of togetherness and joy," which helps with climate grief. "We'll never... have the emotional energy to make a better world without experiencing both sorrow and joy. Sorrow is the gravity of the situation. But joy is the reason to keep going.”

Jennifer Young, a licensed mental health counselor and certified clinical trauma professional, cosigns this. “Rituals within a community or a culture help people to accept the reality of a situation. It is very validating and comforting to be with other people when our world suffers a big shift," she says. "Having a funeral to help with climate grief is one of those things we do to help ourselves.”

And for Noelle Barrera, a 20-year-old climate activist and student at Trinity University, having funerals for a glacier “make[s] the threat of ecological collapse more visible because they combine the concrete evidence of the melting glacier with the symbolic aspect of ritual which facilitates a ‘collective mourning’ for what the glacier represents.”

“Even if we can ‘stop’ climate change — and the institutions and systems that have created this problem — before the Earth becomes uninhabitable, it is unlikely that we will have reversed the damage entirely, and public rituals are a way to grieve the futures that have been lost,” Barrera continues.

But these rituals are not just for grieving: they’re for inspiring people to transform that grief into anger, and then drastic change.

When asked if these kinds of rituals can lead to action, Boyer says “open expression like this funeral for the glacier is a way for this community to ask for help and demand change.”

Young also feels that “Healthy mourning often leads to change — we can only hope that [others] will join the fight."

Dr. Chanda Prescod-Weinstein, Assistant Professor of Physics and Astronomy and Core Faculty Member in Women’s Studies at the University of New Hampshire, believes that the funeral should serve as a sobering reminder that “our local choices don't have borders and often have global implications.”

“Isn’t the obvious lesson here that the fate of people and glaciers are tied together?”

According to the Union of Concerned Scientists, the United States is second on the list of carbon-emitting countries. And according to the 2017 Carbon Majors Report, just 100 companies are responsible for 71% of carbon emissions. In light of the responsibility that certain nations and corporations bear on the impact of climate change, Prescod-Weinstein says that it’s important to remember that “What happened to Iceland isn't because the people of Iceland did something wrong by themselves.” For Prescod-Weinstein, referring to a Mother Jones quote, it is of the utmost importance that people “mourn for the dead and fight like hell for the living.”

Barrera also cautions against people stopping at symbolic actions like a glacier funeral. She tells Bustle that “Sympathy and sadness accomplish nothing without collective action… we are complicit in the systems that have perpetuated ecological destruction… it is our task both to imagine and to create a better world for everyone, especially the demographics who are already being hit hardest by climate change.”

Rituals like these — mourning the loss of a non-human glacier — may obscure the human cost of the climate crisis, including the massive death toll many regions have and may continue to incur. But Prescod-Weinstein says, “Isn’t the obvious lesson here that the fate of people and glaciers are tied together?” If symbols can help spur action on the climate crisis, then they're not just symbols, but tools that can be used to save lives and our collective futures.