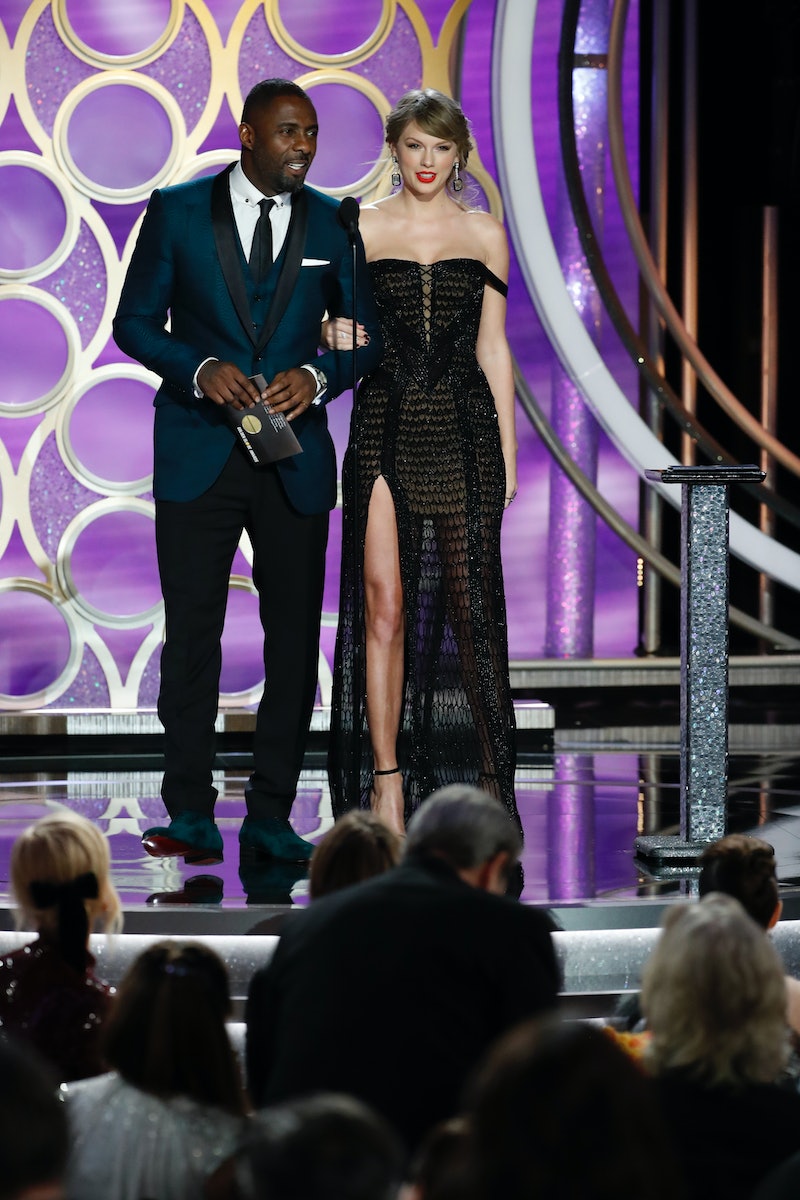 The 76th Golden Globes brought many actors and celebrities on stage together to present the awards for the night, with one notable pair being Idris Elba and Taylor Swift. It might have been a little surprising to see Swift there, but the pairing actually made total sense. Not only are they going to be co-staring in the Hollywood film adaption of the Broadway musical Cats, but Idris Elba wants to collaborate with Taylor Swift some more too — outside of the movie business.

According to Billboard, after Elba took the stage with Swift, he was interviewed by Access. In the interview, he mentioned that he had known Swift for a "couple of years" and said that he could see more collaboration with her in the future. "This year's been amazing, because I get to play and make music a lot more and I'm hoping that...I might get Taylor and I to do a song," he said. "I mean, that would be great."

Before you ask yourself why Elba, the actor, would want to collab with Swift, know that he's actually a very accomplished DJ. In fact, one of those "amazing" things that has already happened this year was the announcement that Elba would be performing at Coachella in April. With a pretty great DJ repertoire, a duet or collab with Taylor Swift looks like a pretty probable option for the two performers.

Earlier in the interview, Elba had nothing but fantastic things to say about Swift. "We're cool, you know? She's a good girl, she's a great artist," Elba said. "She's got a really good heart and she works hard. I'm so excited to work with her in this film. Not only is she a musician but she's an actress as well...she's got chops. She holds her own, no doubt. It comes natural to her." Swift does have a few credits on her resumé as an actor — she voiced Audrey in The Lorax and also had a part in The Giver as Rosemary.

Cats is set for a Dec. 20, 2019 release date, but no footage or stills have been released yet. Swift will reportedly be playing Bombalurina, described as "a flirtatious red cat" by The Hollywood Reporter. Elba is slotted to play "the mischievous Macavity, the Mystery Cat," as described in the musical — in other words, he's the villain. The film will also star Jennifer Hudson, James Corden, Rebel Wilson, Ian McKellen, and Judi Dench.

Cats follows a group of, well, cats, called the Jellicles and their efforts to "ascend to the Heaviside Layer" to be reborn into a new, feline life. It might be a little eccentric, but considering the last time it was filmed was back in the 90s, it was only a matter of time before the beloved musical made its way to the big screen. The original musical was written by Andrew Lloyd Weber, who is also the mind behind other Broadway classics like The Phantom of The Opera, Jesus Christ Superstar, and Evita.

The last album Swift came out with was Reputation back in 2017, and the tour movie just premiered on Netflix, so odds are, she'll be heading back into the studio soon for new music, if she hasn't already. And given their working relationship, it sounds like now might be the perfect time for Elba to shoot his musical shot. Who knows, this time next year, we could all be nodding our heads along to a new Taylor Swift-Idris Elba bop.

More like this
Taylor Swift Wants To Direct A Movie Next — But You Might Have To Wait
By Radhika Menon
Everything To Know About Taylor Swift’s 10th Studio Album, 'Midnights'
By Grace Wehniainen and Jake Viswanath
Twitter Is Freaking Out Over Rihanna’s 2023 Super Bowl Halftime Show Announcement
By Stephanie Topacio Long
What Demi Lovato Really Thinks About Child Stardom, Depression, & Sobriety
By Radhika Menon
Get Even More From Bustle — Sign Up For The Newsletter