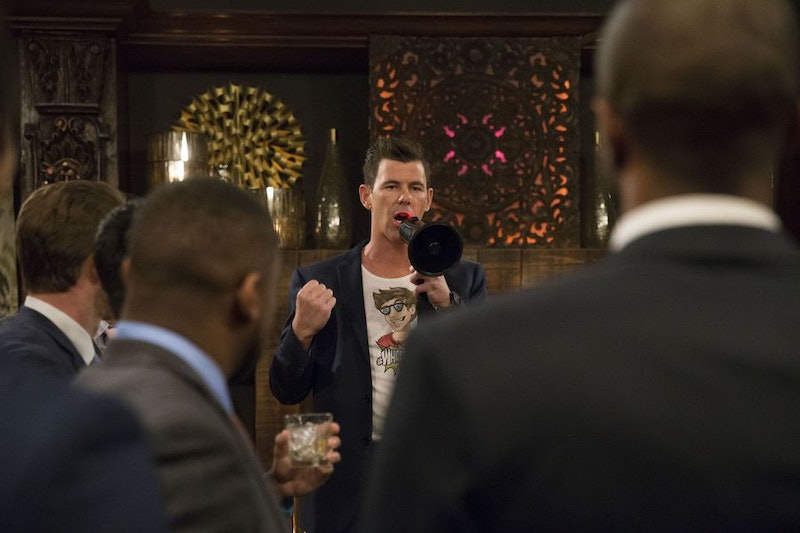 Things started out ugly between Blake, a “Nice Guy” personal trainer, and Lucas, a Teddy Ruxpin spun out of control. These two had already known each other from a previous reality television adventure, and they were not pals. I guess you could call them enemies. I’m tired. Anyway, Lucas screamed “whaboom” a lot and Blake hated it, probably because he wished that he also had a catchphrase that made women curl into their bodies when they heard it. Both men had some shenanigans that involved a banana and sleeping, and when Rachel heard about the fight, she was all like nope and sent them both home. Blake and Lucas got eliminated on the same night (because Rachel doesn't play), and their altercation went a little something like this:

Years from now, cultural anthropologists will study this video to analyze the courting habits of the nondescript white male. Why are they screaming about fart jokes? One is saying “wakka wakka” while the other screams “whaboom.” I am married, but now I see why many of my friends have sworn off dating. Is this what’s out there? Banana intimidation and sweating while yelling at passing clouds?

And speaking of screaming into the void, Eric, Iggy, and Lee got into it because… Eric was feeling insecure about his chances with Rachel? Lee thought Eric hasn't dated enough? Iggy, was... who knows? The jury is out, but work this through with me. Eric was getting emotional because he hadn’t spent that much time with Rachel. But then for some reason, Iggy got involved to tell Eric to chill out, and Lee (who is extremely problematic, according to his alleged Twitter history) jumped in, and then it was just three Brick Tamlands who didn’t know what he was yelling about.

In the grand tradition of Bachelor and Bachelorette in-house fights, all of the other guys tattled on Eric, and I guess Rachel smelled the backstabbing that was cooking because she gave Eric a rose to say, “Who gonna check me, boo?” When will anyone on The Bachelor/ette learn — you cannot talk about someone behind his/her back without him/her finding out? Eric tested his lung capacity, ranting about his name being in Lee's mouth, Lee laughed about how he was making Eric angry, and then everything went haywire. I don’t know what we’re yelling about, but damn, y’all it is serious.

Who is going to watch the first three episodes of this season and tell me that ladies are all about the drama? Every season of The Bachelorette has this same sort of masculine posturing. There is so much testosterone in that mansion that the men don’t know what to do. It is 30 men in heat, and if I were Rachel, I would have already ran for the hills to find a sisterhood commune to just chill in. She's a better woman than us all.