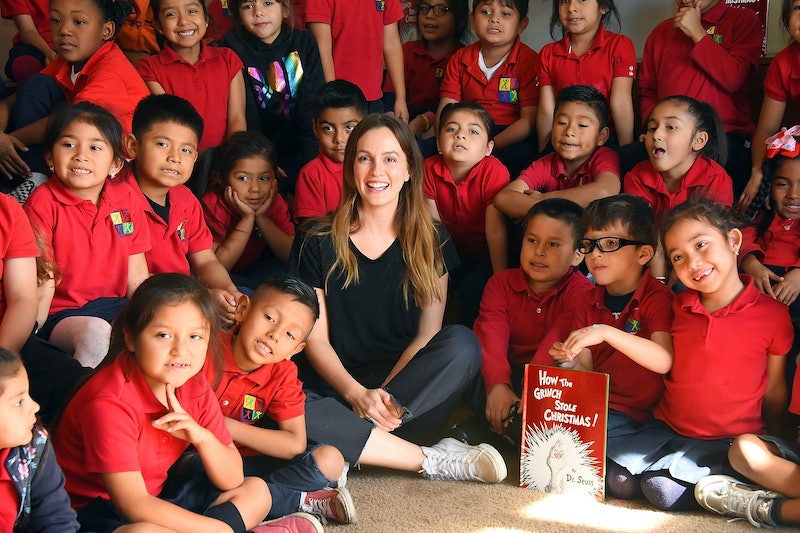 If there's one thing Leighton Meester wants you to take away from this interview, it's that you can never really know the struggles that someone close to you is going through. "[Hunger and homelessness] affects so many people, you might not even know. Your neighbor, your co-worker, your friend, they may be facing challenges putting food on the table for their family," she says, her voice remaining determined, despite the clear inflection of sadness in her tone. "Maybe it's not being able to bring lunch to school or have a snack on the long ride home out of the city, after school, or during after school programs." Meester has been volunteering with the non-profit organization Feeding America for two years, she explains to Bustle during a phone call, and she's still learning about how she can give back to those struggling around the country, through charity and volunteer work. "A lot of people aren't aware."

During her two years working with Feeding America, Meester has done a lot to combat that, between volunteering at Los Angeles' Downtown Women's Center to working with children at Para los Niños Charter Elementary School to assisting with relief efforts in Puerto Rico after Hurricane Maria ravaged the country in 2017. Currently, Meester is working with Feeding America in their new campaign with SUBWAY and Shamrock Farms: For every kid's meal with milk purchased on Jan. 11 at SUBWAY, $1 will be donated to Feeding America to go toward fighting hunger and homeless. "Their goal is $50,000 but we can surpass that," Meester tells Bustle. "$1 can help provide 10 meals."

Volunteer work like this, Meester tells Bustle, is extremely close to her heart. The Single Parents star has previously spoken out about the struggles she experienced growing up, telling Shape magazine in 2018 that her family "relied on lunch programs and food stamps," because "there were many times when I didn’t know if we were going to be able to afford to eat." Feeding America has not only allowed her to combat the food insecurity millions of families experience every day, but it's also taught her that one person truly can make a difference.

"It doesn't take a lot. If you have a Twitter, a Facebook, or Instagram, talk about what you're passionate about and spread the word to even your small social network," She explains.

For those who may want to get involved in volunteer work but are unsure of where to start, she adds, "Probably the number one thing is finding a cause that you are passionate about. It'll give you more incentive and more inspiration... donating your time is obviously in many ways the most fulfilling because you get to interact with people face to face, but at the same time — like in this case with Feeding America — donating your money is important. Spending time at the food bank here in Los Angeles, they told me you know as much as it's really great to get donations of actual food like canned items, a single dollar can actually buy more. It's the small things we can do to help."

For those looking to get involved with Feeding America, you can head over to its website for volunteer opportunities, a donation page, and a map of food banks in your area.