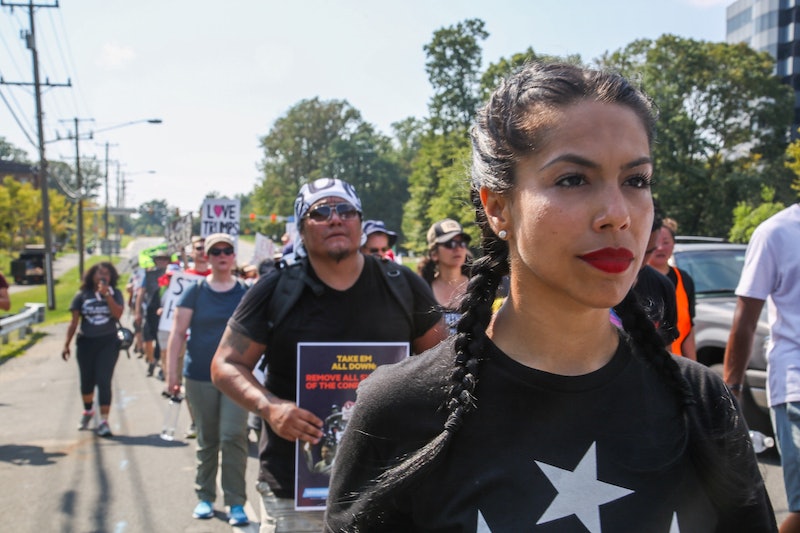 It's been one year since Hurricane Maria made landfall and devastated the island territory of Puerto Rico. The effects of the storm, and political negligence thereafter, have sparked conversations about infrastructure, independence, and political movements. For women on the island and in the diaspora, it meant watching their home and families irrevocably change. Bustle talked to Puerto Rican women from the island and in the diaspora to see how women were affected by Hurricane Maria a year later.

Calling the storm and its aftereffects shocking would be understating the damage. "To go back home and see the place — your place — to go back home and see it, it looked like a bomb went off on the entire island," lawyer Stephanie Llanes tells Bustle. "I can't even describe the feeling of dread and grief. It felt like a piece of yourself died."

The official death toll was raised to nearly 3,000 people just weeks before the storm's first anniversary. The large increase in the official death toll — from 64 to 2,975 deaths, according to NPR — confirmed what many Puerto Ricans already knew: the island endured a high level of destruction. As if the lives lost weren't devastating enough, Reuters reported that Hurricane Maria cut off the power to more than 1.5 million homes and businesses. It took 11 months to restore power to all customers throughout the island, according to ABC News.

The island hasn't been the only place to feel the effects of the storm. In March, the City University of New York’s Center for Puerto Rican Studies published a report that estimated at least 135,592 Puerto Ricans fled for the mainland after the storm. The study found that Puerto Ricans (who are American citizens) have settled in 49 of the 50 states, with population concentrations in Florida and the northeastern U.S.

The storm has fundamentally altered the lives of hundreds of thousands of people — here are just a few of their stories.

More like this
All The Most Stylish Winter Wardrobe Staples You Can Buy On Walmart.com
By Jessie Quinn
Here’s Your Daily Horoscope For December 6, 2022
By Mecca Woods
21 Absolutely Adorable Christmas Gifts For Dogs
By Carolyn Steber
7 Joyful Alternatives To A Traditional Holiday Celebration
By Jessica Goodman
Get Even More From Bustle — Sign Up For The Newsletter