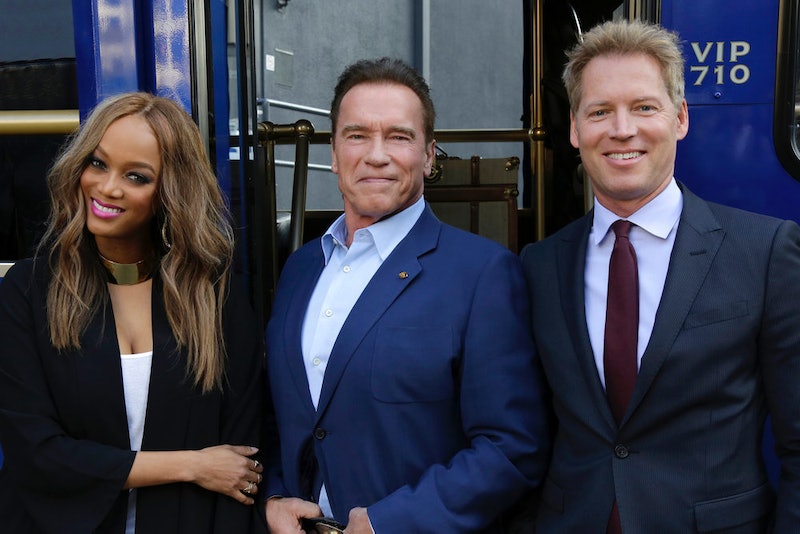 At the end of the New Celebrity Apprentice season finale on Monday, Feb. 13, Arnold Schwarzenegger will say "you're hired" to either musician Boy George or America Ninja Warrior host Matt Iseman. But the big question is, will Schwarzenegger get another chance to tell people they're terminated? Will The New Celebrity Apprentice return for another season? Although Donald Trump doesn't seem to be very impressed with the celebrity who has taken over hosting duties, Schwarzenegger looks like he's actually having a good time.

Currently, there is no official word on whether the series will return, and it could really go either way. On one hand, it's unlikely that NBC would give up what is still a pretty viable show that people have kept talking about. On the other, even though Trump blamed Schwarzenegger for low ratings at his National Prayer Breakfast, The Apprentice has been declining in ratings for a while. But given that Trump still has a hand in the series as an executive producer, there's a good chance that he'll want the franchise to continue. Of course, if the show does return, that doesn't necessarily mean Schwarzenegger will come with it. The Celebrity Apprentice could go anywhere from here if it is renewed, and if the franchise is in need of a new host, here are some ideas.

Jenner may not have boardroom experience, but she's already slated to help Boy George with his challenge in the finale. Plus, it would be fun to see her boss around a room of celebrities and maybe get some of her famous family involved.

Cena has already made a name for himself as a host of sorts, from award shows to morning shows, and he'd keep Schwarzenegger's "tough guy" persona going.

Omarosa may be controversial, but that can draw in viewers, and her fame started on The Apprentice. Plus, she's so closely tied to Trump, it's possible he'd hand pick her to take over.

On the opposite side of that, Cuban and Trump have been publicly feuding, so it'd be pretty amusing to see him take the reins (even if Trump would never let that happen). The Shark Tank host has also proven he knows how to listen to people's ideas and give them honest feedback.

If The New Celebrity Apprentice continues, it could go in some interesting directions. For now, we'll just have to wait and see whether NBC tells the series it's hired.