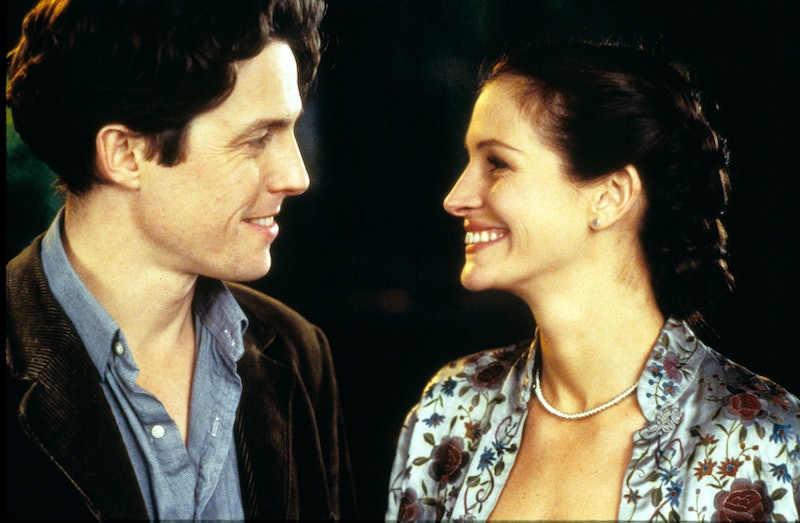 It's a huge year for the rom-com anniversary. Many beloved films from the '90s and early 2000's, including 10 Things I Hate About and 13 Going on 30 are celebrating major milestones this year. The latest film to join the nostalgia party is the 1999 romance Notting Hill, starring Hugh Grant as an English bookshop owner and Julia Roberts as an American actress. If it's been a while since you've seen it, here's a quick recap: Will Thacker, owner of an indie bookshop meets Hollywood actress Anna Scott, who is in town for a movie shoot. He's an awkward, introverted every-man, and she's a charming mega-celebrity with tabloids on her tail, but they have an undeniable spark. After many will-they-won't-they moments, the two realize they are meant to be together in the end.

Notting Hill is now a classic tale of unexpectedly finding true love — and finding yourself, too — while under the harsh glare of the spotlight, but it's not the first, or the latest, film or book to tackle the subject. Maurene Goo's new YA novel, Somewhere Only We Know, also explores the drama and the emotional upheaval of fame, making it the perfect summer read for old and new fans of Notting Hill.

Somewhere Only We Know begins just after K-Pop star Lucky has performed her hit-song "Heartbeat" to an adoring crowd in Hong Kong. Lucky is exhausted — by the night's events and by the non-stop performance that is her life. As a cog in the pop machine, she is kept on a restrictive diet, forced to wear uncomfortable heeled boots on stage, and is expected to rehash every single performance and public appearance with her management team, when all she really wants to do is sleep — and devour a hamburger. That night, Lucky pops a sleeping pill along with her anxiety medication, causing her to drowsily escape from her hotel room and into the city.

'Somewhere Only We Know' By Maurene Goo
Amazon

Enter Jack. He's a teen tabloid photographer (a job which he, naturally, keeps a secret from his parents) who has just snuck into Lucky's fancy hotel looking for his next story. He runs into Lucky, who is in slippers and on a mission to find a hamburger. Jack, ever the intrepid reporter, recognizes the international superstar and realizes he might have found his big break after all.

Goo's book was actually inspired by the 1953 classic film, Roman Holiday, starring Audrey Hepburn as Princess Ann and Gregory Peck as American journalist Joe Bradley. In the film, Ann runs away from her handlers for a whirlwind 24-hours in Rome, aided by Joe, who intends to write a major exposé about the Ann's adventures in the city. Though Ann is unaware that Joe knows her true identity (she introduces herself as "Anya") the two nevertheless form a deep connection during their time together.

The same happens for Lucky and Jack, who spend 24 hours adventuring through Hong Kong (Lucky tells Jack that her name is Fern, and she's in town with her school's choir for a big performance). The duo eat their way through the city, visit bookstores and monuments, and have a grand time together — until the realities of Lucky's life ruin everything. In the end, they discover that their dreams overlap, and their connection is potentially life-altering.

While the plot of Somewhere Only We Know most closely resembles Roman Holiday, the topics explored are Notting Hill all the way: the expectations of keeping up a public persona, the dark side of fame and the real price of freedom, finding a life's true purpose, and whether love can overcome — or be part of — any of the above. Each of these three works have very different endings (none of which I'll spoil for you here), and they all present their own answers to these questions. But each of these stories share one universal truth: It's what we do with love once we find it that matters most.