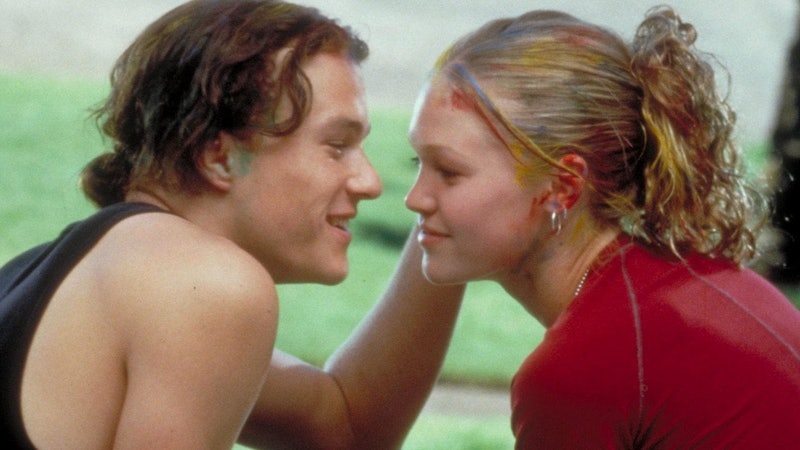 Teen film 10 Things I Hate About You was released in theaters on March 31, 1999, which means this year marks the beloved film's 20th anniversary. The movie is full of icons — including Julia Stiles as Kat Stratford and the late Heath Ledger as Patrick Verona, the role that made him an eternally beloved star — and has been held up as an enduring teen comedy for its discussion of ever-relevant topics like sexual politics and feminism.

Now that you know it's 10 Things I Hate About You's 20th anniversary, you're probably desperate to watch the film on repeat. But once you've relived the antics at Padua High a few times, I've got some modern YA book recommendations that will practically be screaming "I Want You To Want Me" at you when you read their synopses. These reads are sure to give you the same feels as your favorite teen film, with new stories and characters you'll love just as much as your Prada backpack.

Keep scrolling for the the full list below, and then check out more of Bustle's coverage of the film including 13 Things You Didn't Know About 10 Things I Hate About You and 28 Absurd Things From 10 Things I Hate About You (including but not limited to waiters serving shots of tequila at a high school party and cowboys as a teen subculture.) This film truly does have everything!

More like this
The Biggest Differences Between 'Bullet Train' & The Book It’s Based On
By Arya Roshanian
I've Read The Harry Potter Books 30+ Times & This Plot Hole Haunts Me
By Kelsey Stiegman
10 Must-Read New Books Out This Week
By K.W. Colyard
'The Sandman’s Ending Is A Departure From Neil Gaiman’s Comic Book Series
By Kadin Burnett
Get Even More From Bustle — Sign Up For The Newsletter