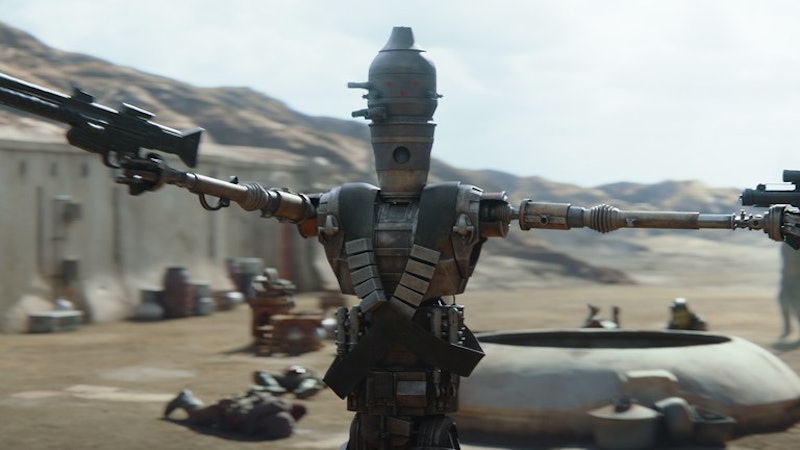 Droids in the Star Wars universe are some of the most beloved characters and Disney+'s The Mandalorian may be introducing a new fan-favorite. The bounty hunter droid IG-11 in The Mandalorian doesn't have a very endearing job. But the new character connects back to the original films since he is the same type of model as the bounty hunter IG-88 from The Empire Strikes Back. IG-11 will also bring some levity to the new Star Wars series since New Zealand filmmaker and performer Taika Waititi provides the voice. If Waititi channels his comedy — like his performance as Korg in that other Disney property, Marvel's Thor: Ragnarok (which Waititi directed) — IG-11 is guaranteed to get some laughs when the first episode of The Mandalorian premieres on Disney+ on Nov. 12.

When it comes to notoriety or screentime, IG-88 from The Empire Strikes Back was no C-3PO. He briefly appeared in a scene with other bounty hunters (including Boba Fett) where Darth Vader was ordering them to find the Millennium Falcon. Yet, this droid's legend grew as IG-88 has appeared in animated series, video games, and graphic novels. He even received his own backstory in the anthology collection Tales of the Bounty Hunters called "Therefore I Am: The Tale of IG-88," which outlines how the IG-88 droids were built to be the ultimate assassins — and IG-11 is an earlier model of this deadly droid.

Not all of the backstory of IG-88 is canon with some of it coming from the expanded universe called Star Wars Legends. But Waititi, who also directed The Mandalorian Season 1 finale, confirmed to the Star Wars Show at the D23 Expo that his IG-11 is related to the original character. "I like to think he's made in the same factory as IG-88," Waititi said. Since he's number 11 while the movie character was 88, Waititi also explained how his character is more of a classic IG model by using a car analogy. "The later Trans-Ams were kinda cool, but the earlier Trans-Ams were like, those are the ones you want. You know? You want the Smokey and the Bandit one, that's what IG-11 is," he said.

Yet, when creator Jon Favreau first teased an image of IG-11 on Instagram, many outlets believed it was IG-88 and were excited by the character's grand return. But executive producer Dave Filoni, who worked on the Legends animated series Star Wars: The Clone Wars, explained to IGN why he didn't bring back IG-88 and opted for a new character. "If you know the Expanded Universe and the Star Wars history, there are a lot of stories around [IG-88] or what might've happened to that particular droid," Filoni said. So rather than contradict the already-established history, "It's better just to say, 'Well, there's other droids,' it's not like it was a unique assassin droid.'"

While you have to be a pretty devoted Star Wars viewer to know all about the history of IG-88, he will come up in The Mandalorian. Entertainment Weekly reported that IG-11 is often mistaken for IG-88 in the Disney+ series. But something that will undoubtedly set them apart is the voice acting work of Waititi. In an interview with EW, Waititi said the tone of IG-11's voice is between Siri and HAL 9000 from 2001: A Space Odyssey. He also confirmed that IG-11 won't simply be a ruthless robotic killer. "[IG-11 is] very innocent and naive and direct and doesn't know about sarcasm and doesn't know how to lie," Waititi said. "It's like a child with a gun." Quite a fitting character to be played by the director and star of the satire aimed at Nazis and the Hitler Youth, Jojo Rabbit.

Knowing Waititi's work behind and in front of the camera in projects like Thor: Ragnarok, Jojo Rabbit, and What We Do in the Shadows, this New Zealander is bound to make this assassin droid as lovable as possible. After all, as Waititi wrote in an Instagram post sharing The Mandalorian trailer, "Bounty hunting is a complicated profession." So while bounty hunters like Boba Fett and the Mandalorian sometimes leave fans with complicated feelings due to their cruel profession, at least IG-11 will leave you laughing as well.