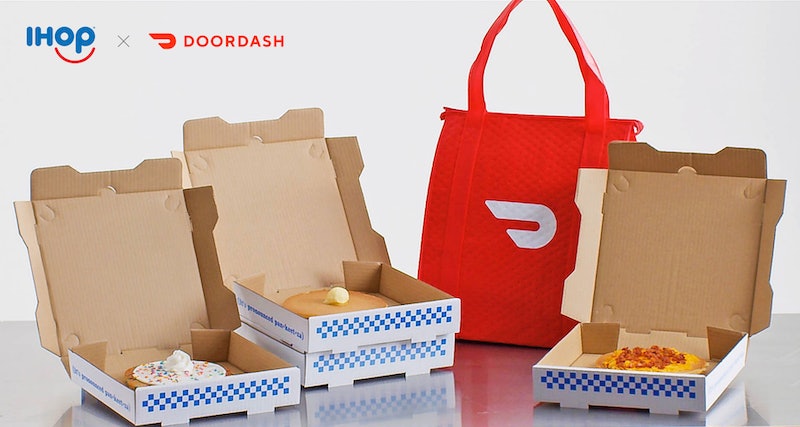 Courtesy of IHOP and DoorDash
By Lucia Peters
Feb. 7, 2019

I know, I know — “national food-related holidays” aren’t official observation by any stretch of the imagination. They are entertaining, though, as well as full of tasty and, often, creative eats and treats to enjoy. Case in point: In honor of National Pizza Day on Feb. 9, IHOP has invented a pizza-pancake hybrid. It’s called the “Pancizza” — pronounced “pan-keet-za” — and it’ll only be available for that one single day. You also might need to jump through a few hoops to get one, but honestly? It’ll probably be worth it. Because, I mean… pancake-pizza hybrid. That’s certainly one for the books as far as I’m concerned.

Like many unofficial food “holidays,” no one is really sure who invented National Pizza Day, or when. What we do know, though, is that pizza lovers everywhere celebrate it annually on Feb. 9. Lots of places even go so far as to offer free slices on National Pizza Day — although some spots certainly go above and beyond, cooking up brand new offerings for the day.

In 2019, one of those “above and beyond” places is — somewhat unexpectedly — IHOP. (Then again, though, maybe nothing IHOP does anymore is unexpected. Not since the IHOB incident, a least.) Their bright idea for National Pizza Day 2019 also celebrates the IHOP delivery program, which went national with the help of DoorDash last summer.

It's adorable, is it not?

“IHOP has a lot of milestones to celebrate with our delivery program and our largest delivery partner, DoorDash, so what better way to do that than to join in on the National Pizza Day fun with our very own pancake-pizza creation: Pancizza,” IHOP’s Chief Marketing Officer, Brad Haley, said in a press release provided to Bustle. “After all, pizza was one of the first and still the biggest ‘circle in a box’ take-out and delivery items in America so, naturally, we thought that we could do our very own IHOP, pancakeified version.” It's available in three flavors: Original Buttermilk, Cupcake (!!!), and Bacon and Cheddar.

Indeed, the Pancizza is essentially a huge pancake with toppings arranged on it the way we usually arrange them on pizzas, rather than how we typically top pancakes: The Original Buttermilk one comes with a dollop of butter on top; the Cupcake one has icing spread on it like sauce, with rainbow sprinkles and whipped cream adding some tasty details; and the Bacon and Cheddar one arrives with cheese spread out across the pancake’s surface and bacon bits sprinkled throughout. I have only one word for all of that, and that word is YUM.

The most important question, though, is this: How exactly does one get one’s hands on a Pancizza? Well, I have good news and bad news. The good news is that are two different ways to nab one. The bad news is that you have to be in some incredibly specific locations to do so. Here’s the deal:

Get One In Person

If you happen to live in New York, you can get yourself a slice of Pancizza live and in person. On Feb. 9, for just that single day, IHOP will be taking over Bleecker Street Pizza, the West Village mainstay that’s been located at 69 7th Ave. South since 2004. Between 11 a.m. and 11 p.m. that day, dine-in visitors can grab one free slice of Pancizza — although you might want to get there early; the pizza shop is known for the length of its lines already, and it’s likely this promo will lengthen them even further. Also, quantities are limited and only available while supplies last. Toppings will vary, too, so know that you might not have too much control over what flavors are available while you’re there.

(If you miss out on the IHOP offerings, though, I still recommend grabbing one of Bleecker Street’s regular slices; the shop was one of my favorites when I worked in the area — which, true, was kind of a long time ago, but the recommendation still stands.)

If you’re not keen on lines, there’s also option two:

Pancizzas will be available for delivery between Feb. 8 and Feb. 10 thanks to a partnership between IHOP and DoorDash — but only in select restaurants in four markets: Chicago, Dallas, New York, and Los Angeles. The Pancizzas available through this offer are seven-inch individual “pies” priced at $4.99 a pop; choose from Original Buttermilk, Cupcake, or Bacon and Cheddar. Your Pancizza will arrive in an exclusive DoorDash x IHOP pizza box, too. Ugh. It’s too cute.

If you’re lucky enough to live in one of those four areas, you can find which specific IHOP locations will have Pancizzas on offer at IHOP’s website; then, place your order at one of those restaurants through the IHOP app, the DoorDash app, or DoorDash’s website. First-time DoorDash users can also get a $0 delivery fee with the code PANCIZZA. (According to Ridester, DoorDash’s delivery fee is typically somewhere in the $5-to-$8 realm.)

For everyone else who isn’t in the Chicago, Dallas, New York, or LA areas, though, there’s still a consolation prize: Between Feb. 8 and Feb. 14, IHOP ‘N Go orders of $10 or more made through DoorDash can secure a $0 delivery fee with the code IHOPDELIVERY.

And, I mean, hey, you can always make a Pancizza yourself, too. Just make yourself a big ol’ pancake (I like this one, but that’s just me), top it with whatever you like, slice it up (or not), and enjoy. Lots of other restaurants and food purveyors who aren’t typically known for pizza are turning out fun opportunities for National Pizza Day, too — like, for example, Baskin-Robbins’ Polar Pizza — so you’ve got options, is what I’m saying.

More like this
8 TikTok Pasta Recipes To Try Out At Home
By Emma Garza
Here’s What Sarah Jessica Parker’s Canned Cosmo *Actually* Tastes Like
By Emma Garza
TikToker Kate Glavan Has The Antidote To The “Hot Girl Walk”
By Alexis Morillo
What Is “Night Luxe?” Breaking Down TikTok’s New Aesthetic
By Courtney Young
Get Even More From Bustle — Sign Up For The Newsletter