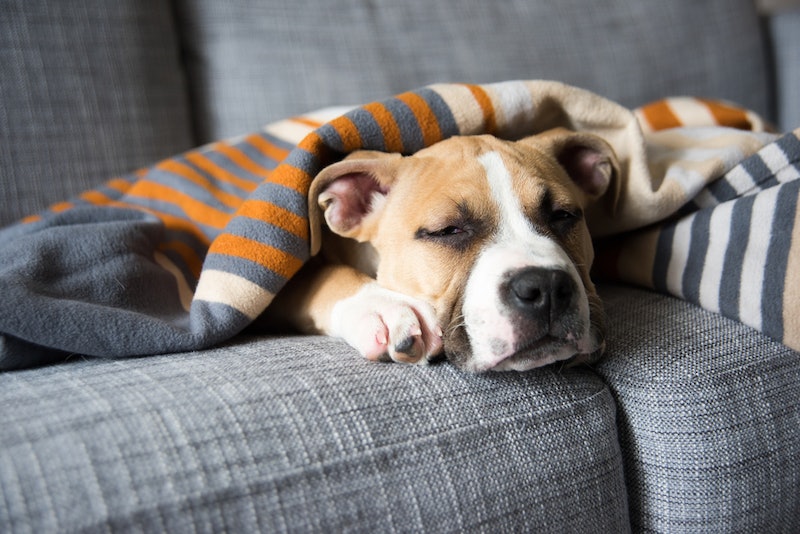 You are probably already obsessed with IKEA (it's hard to find something wrong with a store that sells well-priced home furnishings and meatballs), but just in case you need one more reason to fall in love with the place, here it is: per the Dodo, one IKEA has allowed stray dogs into the store, and the reason why is so sweet it will make you want to cry.

The IKEA in question is the location in Catania, Italy. A few days ago, a customer Martine Taccia was shopping at the store when she stumbled upon a group of dogs sleeping in a living room display. Taccia took a video of the cute doggos lounging in IKEA, as one does, and sent it to her mom, who posted it on Facebook, where it obviously went viral — at the time of publishing, it has amassed nearly one million views. Taccia spoke about it to The Dodo, saying, "My reaction was pure amazement. It's not a common thing."

As it turns out, IKEA wasn't using the dogs to make their store feel more cozy, and they didn't belong to a customer who let them hang out wherever they wanted. Instead, Accia told the Dodo, the Swedish furniture store had opened their door to local stray dogs who needed a place to stay, get warm, and rest comfortably. The store didn't stop there — Taccia learned that they were also feeding the dogs daily, pampering them with head scratches, and letting customers play with them and show them love. She said, "Some dogs have even found a family, going home with customers."

Excuse me while I sob uncontrollably. Here's the video that went viral on Facebook below.

It's pretty clear that the IKEA didn't do this as a publicity stunt, since the world hadn't heard about it until Taccia posted the video on Facebook. That makes the story even more heartwarming and genuine. It's also a really great idea: not only are they keeping the dogs out of harm's way inside, they're also relieving overcrowded animal shelters and even going so far as to get these dogs forever homes — a win-win if there ever were one.

Since the video went viral on Facebook, many other social media users have shared their own sentiments about how amazing this is, bringing it to the attention of other customers.

And as TIME pointed out, this isn't the first time IKEA has gone above and beyond to help animals in need; in 2014, the company launched Home For Hope, a project where they collaborated with animal welfare groups in the U.S. and in Singapore by adding cardboard cutouts of adoptable animals to their room displays. If that wasn't enough to jog your tear ducts, then no doubt the quiet initiative this IKEA in Italy took with real dogs will open the floodgates. Seems like now is a good time to book a flight to Italy to go cuddle with these furry friends — and to start hoping in the meantime that other stores adopt this precious policy, too.