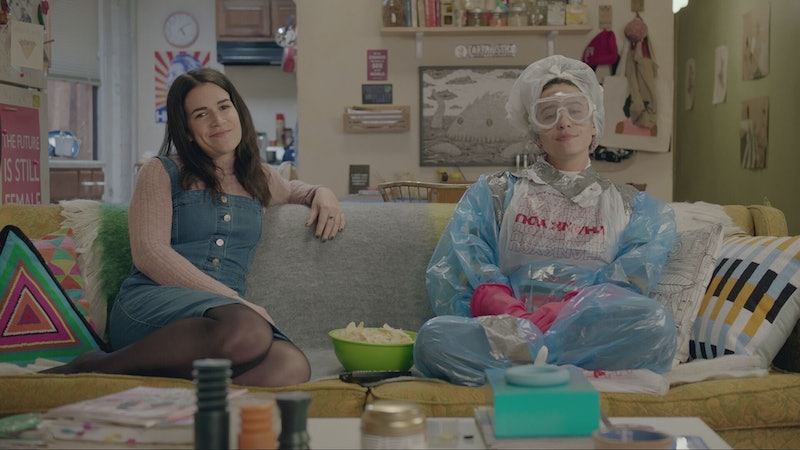 The money from her lucrative serving job can't save her when Ilana gets bedbugs on Broad City in her and Jaime's apartment. She finds out that the origin of the critters is the secret prostitution ring that Brenda (Sandra Bernhard) was running at Sushi Mambeau, but too many city dwellers know that you don't have to be engaged in that kind of business to get them. In fact, anyone can be susceptible to bed bugs (yes, anyone), but bed bugs particularly plague people in cities. Broad City can be fantastical at times, but the comedy also shows some of the potential realities of living in New York City. So in honor of Ilana's infestation, here's everything you didn't think you wanted to know about bed bugs — an urbanite's worst nightmare.

Yes, Ilana she sleeps with money in her bed, and there are probably other cleanliness issues in her apartment. But New York City's official health page makes it clear that bed bugs are indiscriminate. The exterminator (guest star Lea DeLaria) tells Ilana basically the same. "Anyone can get bed bugs," the city's website notes. "Bed bugs have been found in the homes of the wealthy and poor. Unsanitary conditions will not cause bed bugs."

The reason bed bugs are such a pest in cities is because of the sheer amount of people. Entomologist Michael Potter told NPR in 2010 that cities like New York, Philadelphia, Detroit, Chicago, San Francisco, and Baltimore have some of the highest infestation rates. "Basically when you have lots of people living in close proximity to one another and you have lots of travel and movement of people, you're going to have bedbug issues," Potter said.

While it's horrifying to comprehend that no amount of cleanliness will protect you from bed bugs, especially if you live in a city, you might take some comfort knowing that the pests have most likely been around for millennia. As BBC notes, ancient Egyptian literature referenced bed bugs and archaeologists believe they discovered fossilized bed bugs that are 3,500 years old. Yet, humans appeared to have eradicated the pests for almost 60 years in the 20th century, as Vox outlined in an interview with Brooke Borel, the author of Infested: How the Bed Bug Infiltrated Our Bedrooms and Took Over the World. That was because chemist Paul Müller discovered in 1939 that DDT could be used as an insecticide. DDT (which has since been banned) and other chemicals kept bed bugs at bay.

But NBC News reported in 2005 that they reemerged in the early 21st century. And Potter told USA Today in June 2017 that bed bugs have come "roaring back in the last five to seven years." So in a city like New York, there really isn't any way to avoid them. When Jaime says how he'll have to stop sitting on wooden benches in the subway, he's not entirely wrong. The New York Post reported that bed bugs were spotted on subway benches in 2008. And the now-defunct Gothamist reported that bed bugs were frequently popping up on the subway in the summer of 2014. MTA spokesperson Adam Lisberg told the press at the time, “The subway system has 5.5 million riders every single day and we can’t check all of them for bedbugs before letting them on the train. That said, when we get reports of bedbug sightings, we investigate — and exterminate. This is an interesting story but not a big problem.”

Since they are so common, it's not fair that Jaime and Ilana briefly turn on each other in an attempt to figure out how they got these pests, or that they think dirty sexual partners are the reason for the bedbugs. It's completely understandable that Ilana's brother, mom, and even Lincoln wouldn't want to introduce these pests into their own homes, but the stigma surrounding these bugs isn't justified. In fact, Borel explained that shame is one of the many reasons bed bugs can be so difficult to get rid of. "People might initially try to hide the fact that they have an infestation — until it gets worse and worse, and then it's spilling over to neighbors," Borel said to Vox.

Besides shame, Borel pointed to another psychological issue that's involved with bed bugs — the fact that they attack when you're utterly defenseless. "There is something about the fact that your bedroom is your sanctuary, and you're also the most vulnerable in your bed, because you're sleeping. You really don't get much more vulnerable than that; you're literally paralyzed," Borel said. "And to have something that's hiding that you can't see that comes out and attacks you in your sanctuary, that is just really psychological difficult."

Because of the mental and physical toll bed bugs take on their unwilling hosts, it's a good thing that Ilana has her best friend Abbi to turn to in her time of need. Because just like getting mugged (as Abbi experienced, courtesy of guest star Steve Buscemi), getting bed bugs is a quintessential New York experience.

More like this
Michael & Kathleen Peterson’s House From ‘The Staircase’ Has New Owners
By Kadin Burnett and Kayla Blanton
'This Is Us' Just Gave New Meaning To Jack's Death & His Love Story With Rebecca
By Grace Wehniainen
Cardi B Explains To David Letterman Why She Uses Her Star Power For Politics
By Jake Viswanath
'Who Killed Sara?' Won’t Return For Season 4
By Brad Witter
Get Even More From Bustle — Sign Up For The Newsletter