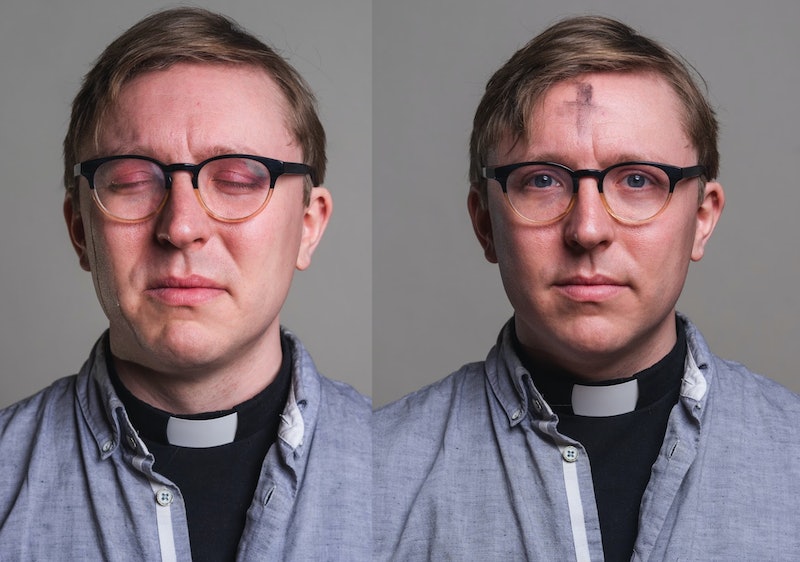 Growing up, I can’t remember exactly when I lost my faith. I know it was sometime in middle school, but it’s difficult to pinpoint the precise moment. I can remember sitting in a confirmation class, though, when my pastor asked us to draw a picture of God. I drew an old guy in the sky, but even as I drew, something within me knew that this picture was a fabrication. I still went to Presbyterian Church, and if you had asked me what I believed, I would have told you I was Christian — but only out of habit.

It’s not a coincidence that this soft atheism developed alongside the burgeoning awareness that I was bisexual. My attraction to men shook my simple, childhood religious understanding, as the neat and tidy vision of a patriarchal God clashed against my passions. It wasn’t that I didn’t believe that God could love me: I simply no longer saw myself reflected in the Christianity that I’d inherited. Besides, I heard too many bigoted voices put hatred in God’s mouth — folks like Rev. Jerry Falwell who said that gay people were responsible for my classmates’ parents’ deaths on 9/11. When the loudest Christian voices spew such contemptible hatred, a loving gospel can become hard to hear.

I was distinctly lucky: I grew up in a Church that welcomed LGBTQ people, and I wasn’t forced to listen to sermons about how my identity was sinful — a cross far too many queer people are forced to bear. But I didn’t hear sermons that celebrated who I was, either. Whereas my pastor often preached against racism and white supremacy — saying how all people are made in God’s image — sexual diversity was never included in these addresses. And, in the absence of that much-needed message, voices in our broader culture that label homosexuality as deviant and sinful stoked tension in my soul that began to cut me off from God. When I graduated high school, I stopped going to Church, and spent my college years largely separated from the divine mystery.

Despite this religious alienation, I had an experience my senior year that changed my life forever. I was feeling dissatisfied with research I had been doing; though it stimulated me intellectually, it left my heart feeling empty. To clear my head, I went for a hike with some friends. While we were in the woods, I sat down on a stump to think about what I wanted to do when I graduated. As I thought, I picked up a leaf and had what I can only name as a mystical experience; though it was dead, wrinkled and brown, I suddenly felt as if the leaf came alive again in my hands. An oceanic feeling swept over me — a sense of deep connection to all living things, so powerful and intense it brought me almost to tears. In an instant, the emptiness of my spiritual life was thrown into sharp relief.

So I made a decision to go to seminary to become a hospital chaplain, which is a clergy member who provides support to patients and families, though I was distinctly unsure of what I’d find there. But I’ll never forget the moment when, in my first semester, I opened Patrick S. Cheng’s book Radical Love and read, “Christian theology is a fundamentally queer enterprise.” The words hit me like a thunderclap. Cheng wrote so movingly about how the biblical story shows God violating fixed and unjust hierarchies, how God’s incarnation in Jesus resonates with LGBTQ coming-out narratives, how God revels and is present throughout the wide diversity of human sexual experience. My mind and spirit reeled: Could God be queer like me? Suddenly, I saw myself reflected in God’s glorious image in a way I hadn’t since I was a child.

The more I read and studied, the more I realized, this wasn’t just some modern theologian’s reinterpretation of Christianity — for me, God was, indeed, radiantly and unabashedly queer. The Bible, for example, refers to God in interchangeably masculine and feminine language. God is described frequently as a "father," but is also identified as a mother: “I have longed to gather your children together, as a hen gathers her chicks under her wings” (Matthew 23:37); “Like a woman in childbirth, I cry out, I gasp and pant” (Isaiah 42:14). Similarly, in 1300 C.E., German mystic Meister Eckhart wrote, “From all eternity God lies on a maternity bed giving birth.” My heart leapt when I read Julian of Norwich’s vision of how Christ invited her to enter the “vaginal wound” in his side in Revelations of Divine Love.

Finally, the world could see me for exactly who I am — who God created me to be.

As I read and prayed, I finally understood: Of course I had struggled as a child to believe in an old man in the sky. God is so much wilder, grander, and more beautiful than that hollow replica I drew. Much to my own surprise, I discovered that what I truly felt called to do was to share this beautiful vision of God I received in seminary, particularly with people who have long been told that God does not resemble them.

Only one hurdle remained: I needed to tell other people about my bisexuality — a secret I had shared with my wife and closest friends, but long kept shrouded from public view. But the presence of a glorious coming-out story at the heart of Christianity gave me strength to live in the fullness of my humanity.

This winter, I came out publicly for the first time in Union Theological Seminary’s Queer Faith photojournalism series. (Full disclosure: I work for Union’s communications department.) In a country that often treats LGBTQ people and religious people as if we were mutually exclusive, this may sound like an odd project, but read it and you’ll see person after person describe how queer identity nourishes our faith, and how God embraces the fullness of our humanity. Though today, I don’t feel any conflict between my sexual identity and my calling as a Presbyterian minister, I’d be lying if I said this harmony came easily. However, when I finally spoke my truth, my soul rejoiced in spiritual liberation, the likes of which I had never known. Finally, the world could see me for exactly who I am — who God created me to be.

As a minister, I feel a deep responsibility to preach the queerness of God’s love, in all its transgressive glory. I want every LGBTQ child to hear that, not only is their identity not sinful, it is a wondrous manifestation of the divine. And I feel particularly beholden to call out bigotry masquerading as God-talk. For far too long, white, evangelical Christians have publicly defined what Christians must believe about LGBTQ people for the public imagination. As a result, far too many folks feel like I did — as if they were forced to choose between their faith and the fullness of their humanity. Instead, I want all LGBTQ folks to know that we are fearfully and wonderfully made, that our desires, love, and identities can indeed be holy.