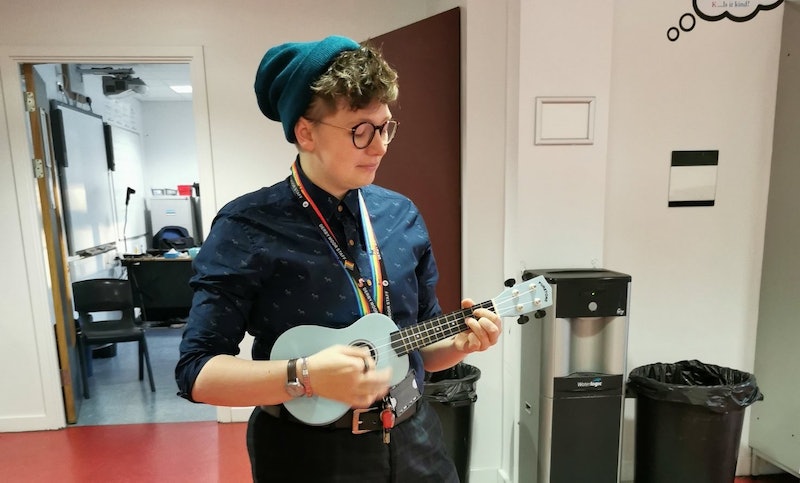 When I was seventeen I was spat on in the street for having short "boyish" hair. This came after years of swapping a preferred neutral appearance for long hair, short skirts — conforming to be somebody who felt less and less like me. I remember once I was aggressively catcalled as I walked home from school, by two older men hanging out of a pub door. I was just thirteen. Looking back on both incidents I don’t know what felt worse – feeling discriminated against while trying to fit in or discriminated against for trying to be me. For many people incidents like these aren’t just about appearance. They’re much more than that and can cause long lasting effects, especially for members of the LGBTQ community.

Growing up I didn’t have any queer role models to look to. I didn’t know why I didn’t like just boys, or even what it meant to identify as bisexual until a friend came out to me while we were in Year 10. In fact, it was only then that things started to make sense.

This was in a time when the repealing of Section 28 — which made it illegal for teachers to even talk about what it meant to be LGBTQ — was still fresh. Although repealed in 2003, the stigma of homosexuality still lingered in the halls and school became a very lonely place for pupils like me, who were unsure of who they really were.

At 18, during my A-Levels, academic pressures, a rocky home life, building anxiety, and a personality crisis meant I became a ticking time bomb of stress ready to erupt at any moment. I suffered with panic attacks, dropped grades, and would often cry in lessons.

But then something changed. Finally, my Biology teacher, Miss. Jubbs noticed how I wasn’t coping, sat me down and worked through all of my anxieties with me. She helped me to see a light at the end of the tunnel and showed me teachers do so much more than help you pass exams.

This was the first time I thought of teaching as a career and thought that one day I’d like to help someone the way Miss. Jubbs helped me. Fast forward five or so years and here I am — in my mid-twenties —teaching Biology in Derby.

I trained with the education charity Teach First and was selected to work in a community that really needs more great teachers. This is the kind of place I grew up in, where schools doing the hardest jobs are often forgotten about, meaning pupils can suffer academically in result.

From experience I knew that there were so many factors that can affect a young person’s school life, which is why I wanted to be a somebody that could help, especially as an LGBTQ teacher. It was only a few weeks into teaching when I experienced homophobia — not directed at myself, but between my students.

It’s sad to think that children can see homosexuality as a threat. Watching them accuse each other of being “so gay” – like that’s the worst possible insult they could throw. Hearing this even now as a teacher rekindled haunting memories of my teenage years. I had naively thought that this view was now much less common, especially among the younger generation.

Knowing that I wanted to change this, I approached our Head Teacher and asked to set up and LGBTQ support group, shortly after, my students hosted awareness events and fundraised for the LGBTQ charity Stonewall, encouraging a huge sense of pride amongst the school.

And what may have just looked like a few notice boards and charity bake sales really did make a difference to the confidence levels of our students. These small actions helped every student in our school understand and celebrate a whole community of people — and it was just the start of something amazing.

I can still see the difference in my students, as they wait at my door to tell me about their summer, as they swap coming out stories, as they analyse the ideas of gender in our society and discuss one another’s names and pronouns. Even down to the confidence they show in the classroom, in casual conversation, they seem more relaxed and happier than ever.

This is why I think diversity in teaching is so incredibly important. Knowing that someone has had a similar experience to you, that they can identify with what you’re going through and will understand and offer advice if you choose confine in is such a relief.

This is why I am unapologetically queer at work. Because queer students need a mentor. As a teacher it is so important to use your platform for change. Whether you can support students on their LGBTQ identity, educate others on race or ethnicity, or dispel myths on disabilities.

Really, we need more teachers telling students they are worthy, that they are supported, believed in, telling them they can achieve and then helping them to do so, no matter who they are or where they come from.

So, this World Teachers' Day why not take a moment to think of the teachers who really made a difference to you – it might even encourage you to take it forward one day.