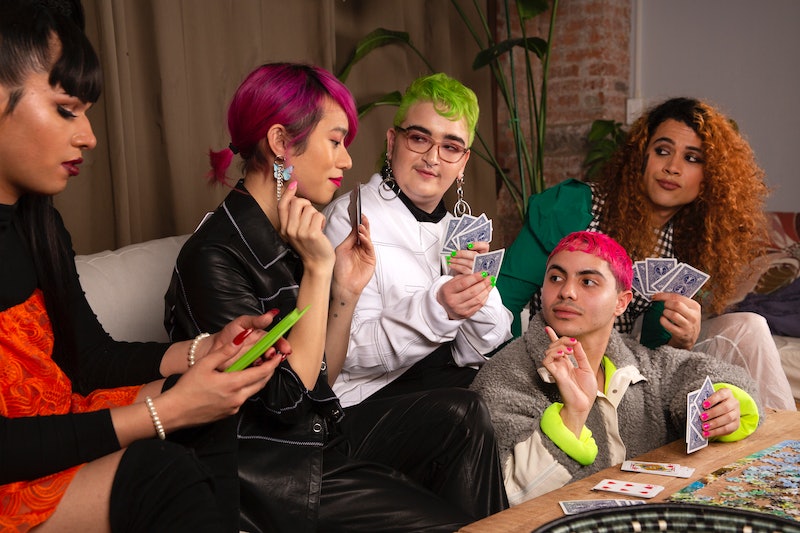 To refer to "the LGBTQ community" might be an easy shorthand, but it cannot hope to convey all the richness of both personal and communal queer experiences. And as young LGBTQ people learn more about themselves and the possibilities for their sexualities, more young people are using broader terms to describe themselves. The Trevor Project, the world’s largest suicide prevention and crisis intervention organization for LGBTQ young people, found that more and more LGBTQ young people are identifying outside of the labels lesbian, bisexual, and gay, according to its latest research brief.

The report, called "Diversity of Youth Sexual Orientation," compiled self-reported information from over 24,000 people attained in The Trevor Project’s 2019 National Survey on LGBTQ Youth Mental Health. From this data, the new report found that 45% of the 13-24 year old survey participants self-identified as lesbian or gay, while 33% of participants identified as bisexual. The other 21% of LGBTQ youth surveyed, however, identified as "something else" other than lesbian, bisexual, or gay. These youth (approximately one in five queer young people) were prompted to follow up their responses with clarifying labels such as queer, asexual, and aromantic.

These young people's clarifiers in their identity labels indicate a high level of understanding of the nuances of sexual and romantic attractions. Not everyone's emotional and sexual attractions match their romantic attractions, and not everyone feels romantic or sexual attractions at all. The labels young people are choosing for themselves demonstrates that young people are feeling more free to define themselves against typical expectations. In the case of a young woman identifying as an asexual lesbian, for example, this label demonstrates that you can be a woman who dates women (a lesbian) without the expectation that they also should enjoy or have sex (asexual).

This kind of openness about who young people are and what they want literally has the potential to save lives, according to Dr. Amy Green, PhD, Director of Research for The Trevor Project. "The Trevor Project often hears from young people who identify outside of the sexual orientation labels of gay, lesbian, or bisexual," Green said in a press release emailed to Bustle, "and many times they are able to articulate the difference between their emotional, romantic, and sexual attractions to others." The linguistic creativity and nuance demonstrated in the participants' self-reporting demonstrates the importance of representation of more than just lesbian, bisexual, and gay people in the media, according to GLAAD's 2018 report on LGBTQ inclusion in the media.

This representation is perhaps especially important for trans and non-binary young people. Green tells Bustle that the research found that over 40% of transgender and nonbinary youth chose a label that wasn't lesbian, gay, or bi, compared with 11% of cisgender youth. This highlights the importance of using diverse language and labels when discussing marginalized communities and individuals within already marginalized communities.

"We know that positive representation of LGBTQ identities in the media can have a strong impact on young people's identity development," Green says. "Portrayals that are inclusive of the labels and language used by the broader population of LGBTQ people will be best situated to have the largest impact, including among those whose identities are often rendered invisible." This Trevor Project study emphasizes the need to continue to flesh out and expand the ways that media conceptualizes of young people's queer identities, so that more and more young people can feel recognized, included, and ultimately, not alone.

Dr. Amy Green, Director of Research for The Trevor Project