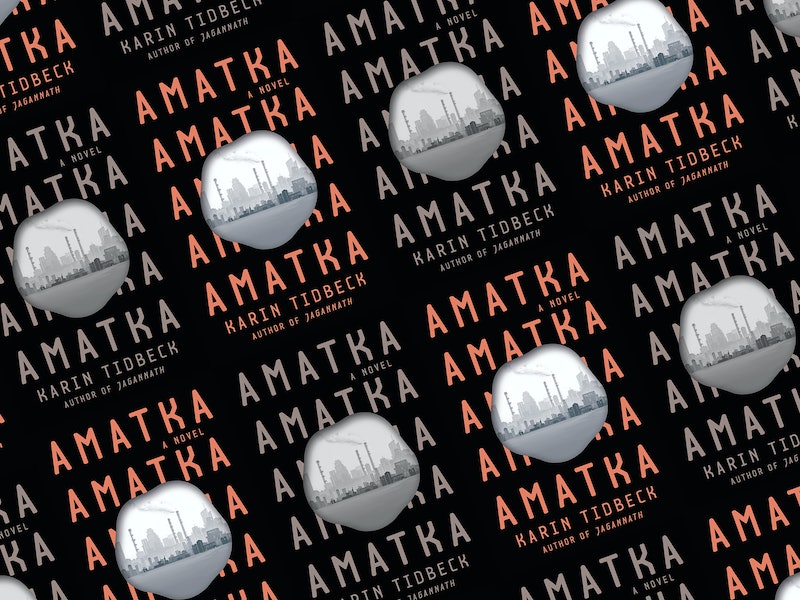 Bustle's I'm So Jealous series is dedicated to the books, TV shows, movies, podcasts, and more that super fans are so jealous someone else gets to experience for the first time. In this installment, K.W. Colyard writes about Karin Tidbeck's Amatka.

For the last two-thirds of my life, George Orwell's Animal Farm has been my absolute favorite novel, bar none. Reading it for the first time 20 years ago set off a lifelong love affair with dystopian fiction and books set in Soviet Russia and the DPRK. I later found the same sense of dread I got from Brave New World and The Handmaid's Tale in horror novels from Stephen King and Joyce Carol Oates. So you can imagine just how thrilled I was to find Karin Tidbeck's Amatka — a horror novel set in a quasi-Soviet state. This book is Nineteen Eighty-Four meets The Stuff.

In the world of Amatka, a single, strange substance is used to create nearly every inanimate object, which must be shaped and marked with words dictating its function. The markings won't last forever, but things can be kept in shape longer if one tells them what they are — a fact of life that even very young children know. When the markings run out, those things revert back to their original state, a paste-like substance that can move and grow of its own accord.

Vanja, a government pollster, is sent to a remote, agrarian commune to research the toiletry and cosmetics needs of its citizens. She comes from the capital city of Essre, where things must be marked in order to retain their shape and function, but marking takes on a new, dire importance in Amatka. Vanja soon learns that her carelessness could spell disaster in the cold, polar community that is to be her new home. More than that, she uncovers the secrets behind the substance used to make everything that surrounds her — secrets her government would rather keep under wraps.

Amatka's horror is a slow burn that begins by unmooring the reader. Marking objects? Toothbrushes that turn to paste when left unattended? Rooms that have to be scoured with acid after an item unmakes itself? The sense of dread sets in as you realize that the world Tidbeck has created, which initially seems very much like one you'd find in any other dystopian novel, has a lot less in common with our world than you originally thought. That feeling deepens when you realize that the "old world" the characters consistently refer to is — or was — our own.

If you are picking up Amatka for the first time: Prepare for an unsettling story with a slow-building terror that will keep you guessing until the very end.

If you love it and want more of the same: You should definitely check out some other works of Swedish speculative fiction, such as The Dying Game by Åsa Avdic, Kallocain by Karin Boye, and The Unit by Ninni Holmqvist.

If Amatka leaves you wanting more Karin Tidbeck: You'll want to pick up Jagannath, her 2011 collection of short stories. Tidbeck has also published several standalone works of short fiction, including Reindeer Mountain and The Last Voyage of the Skidbladnir.

More like this
This Creepy TikTok Trend Encourages Out-Of-Body Experiences
By Kaitlyn Wylde
10 Must-Read New Books Out This Week
By K.W. Colyard
The Biggest Differences Between 'Bullet Train' & The Book It’s Based On
By Arya Roshanian
'The Sandman’s Ending Is A Departure From Neil Gaiman’s Comic Book Series
By Kadin Burnett
Get Even More From Bustle — Sign Up For The Newsletter