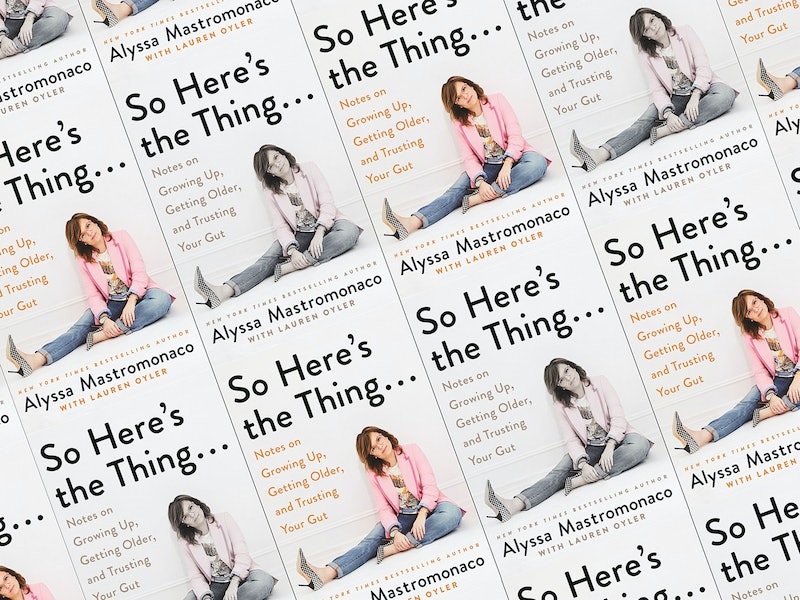 If the current conglomerate of White House women was a sorority, I would have absolutely no interest in pledging. As a political junky however, I still do dream of one day working in the White House and joining the ranks of the few women who, with astute insight and hard work, have obtained senior status. One of those powerhouse women is Alyssa Mastromonaco, former Chief of Staff of Operations in the Obama administration. In her second collection of short essays So Here’s the Thing…, Mastromonaco drops some serious wisdom about carving your own path and, provides you with glimpses of her time working in the executive branch.

It’s tempting to look at what Mastromonaco has accomplished and say "I want to be her," but that is precisely what she warns against in one essay from the book. The question she most detests hearing, she writes, is "how can I be you by the time I’m 35?" I cringed with embarrassment when I read that line, because that is exactly what I had spent the first few essays wondering. Mastromonaco quickly set me straight. As a young woman interested in politics, I often catch myself trying to become my role models, rather than trying to learn from them. Because of the scarcity of women in places of power, I often see one woman’s success and determine that if I can do what she has done, I can consider myself successful. Mastromonaco's reminder that “[success] means wildly different things to different people" served as a much needed wake-up call for me. While her story and career is one that I will continue to admire, it is no longer one that I will strive to replicate.

'So Here's The Thing...' by Alyssa Mastromonaco

The Obama White House posse could not have been more different from the administration in power right now. As you read Mastromonaco’s descriptions of the intimate details of campaign stops and foreign trips, it is easy to imagine that you are just a part of the gang, joining in on their laughs and adventures. She humanizes people who, for eight years, controlled the fate of our country. These stories renewed my passion for politics and reminded me that while I don’t support the administration at 1600 Pennsylvania Ave. right now, it can still be a place where I aspire to work.

Mastromonaco may seem intimidatingly impressive, but she does not miss any opportunity in her book to remind you that she is painfully, and often embarrassingly, human. One go-to topic is her irritable bowel syndrome. While that might seem like a reason to put down the book in favor of something containing less graphic depictions of fecal matters, her stories will instead have you holding back laughter — especially when you read about how she held back disaster en route to a Marine One base following a certain cheese quiche incident. Reading such openness from such an important and distinguished woman reminds me that life experiences and inconveniences are not something to be ashamed of. If Mastromonaco can advise the president of the United States while managing a constant fear of pooping her pants, I can surely handle whatever insecurity is plaguing me today.

While the idea of brunch with Hope Hicks or a yacht ride with Betsy DeVos makes my toes curl, nothing seems better than an evening of The Bachelorette with Mastromonaco (did I mention that she is a huge fan and devoted live-tweeter?). Because that isn’t very realistic, I instead settle for reading her book for the second or third or fourth time. I refuse to let the actions of people like Sarah Sanders, Ivanka Trump, and Kellyanne Conway spoil my White House aspirations, so I’m grateful that Mastromonaco and her book have reinvigorated my motivation to make change happen.

If you’re picking up Alyssa Mastromonaco's book for the first time: Prepare to spend the hours after you finish it researching current campaign job openings so that you too can have an exciting political career, full of adventure and impact.

If you love it and want more of the same: Check out her first book Who Thought This Was A Good Idea? It offers even more details about her time in the White House, and it’s just as hilarious as this book.

And if this book turns you into an Alyssa Mastromonaco superfan: Listen to her hot takes on current events every week on Crooked Media’s Hysteria podcast.

More like this
Pamela Anderson Is Still A Hopeless Romantic
By Ilana Kaplan
10 Equally Romantic & Heartbreaking Books From British & Irish Authors
By Shahed Ezaydi
Matt Hancock’s TikTok Is The Most Matt Hancock Thing Ever
By Sam Ramsden
Eurovision Has Been Given A Whole New Look Ahead Of Its Liverpool Debut
By Bustle UK
Get Even More From Bustle — Sign Up For The Newsletter
From hair trends to relationship advice, our daily newsletter has everything you need to sound like a person who’s on TikTok, even if you aren’t.