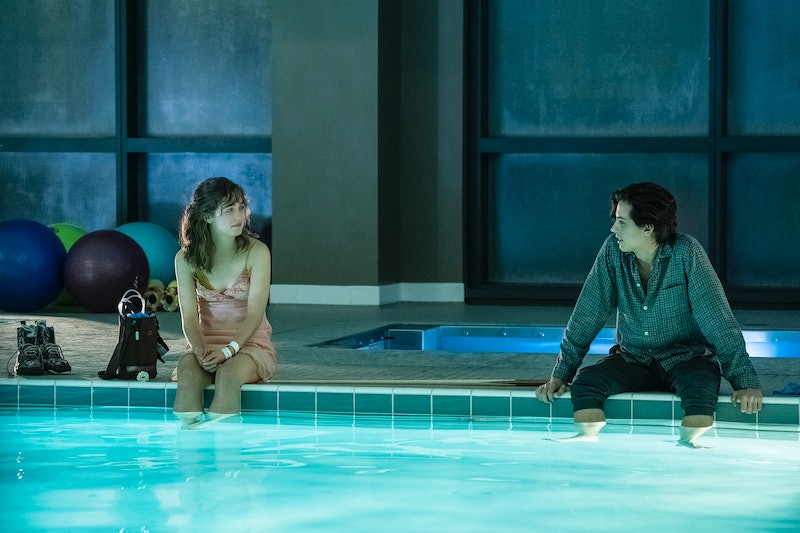 What happens when you fall in love with someone you’re not supposed to? Cole Sprouse and Haley Lu Richardson star in the unique romantic drama, Five Feet Apart, out Mar. 15, which tells the story of a couple with cystic fibrosis who cannot touch each other due to cross-infection concerns. The couple knows that the odds are against their romance, but still fight through the challenges to be together.

But it isn’t quite love at first sight for Stella (Richardson). When she first meets Will (Sprouse), he doesn’t seem to take their health concerns seriously, and immediately wants to get physically (and figuratively) closer to her, much to her chagrin. And just like Sprouse’s Riverdale character Jughead, Will is a rebellious spirit. But once he sees how much it means to Stella for him to follow through with treatments, Will decides to make a deal with her that he'll begin to take better care of himself if she lets him draw her.

In this exclusive clip, we see Stella and Will when she finally agrees to let him pull the Titanic move after a workout. While he draws her, she's working on her "to-do list" of all the things she wants to do that day. At this point, Stella hasn't opened up much about her life, so Will sees this as the perfect opportunity to get to know her. When he asks what else is on the list, he finds out that Stella also has a bucket list of sorts, where she's written all her big goals for before she dies. But once he asks if she'd like to travel the world, she changes the subject. Check out the couple's chemistry in the scene below:

There are plenty of romantic drama films that tackle terminal illness, from The Fault in Our Stars to Love Story. But Five Feet Apart isn’t just about Stella and Will falling in love. It also shows how important it is for these characters to live life on their own terms and find happiness, even in unexpected places. In an interview with Cosmopolitan, Richardson spoke about how much this message in the film means to her.

“One of my favorite lines in the movie is when my character says, ‘My whole life I’ve been living for my treatments instead of doing my treatments so that I could live.’ That affected me so much and I hope that it gets to people,” said Richardson. “It can be very broad things, the message of even if you have something that’s holding you back and you have to do something, keep going and fight. You’re fighting it to live. You don’t have to hand over your whole soul to that thing, to that monster.”

Not only does Five Feet Apart represent patients with CF, it also gives audiences who may not have previously understood CF a glimpse at what it looks like to live with the disease. In telling its unconventional love story, the film also has the potential to motivate viewers to live their own lives to the fullest, regardless of their circumstances.