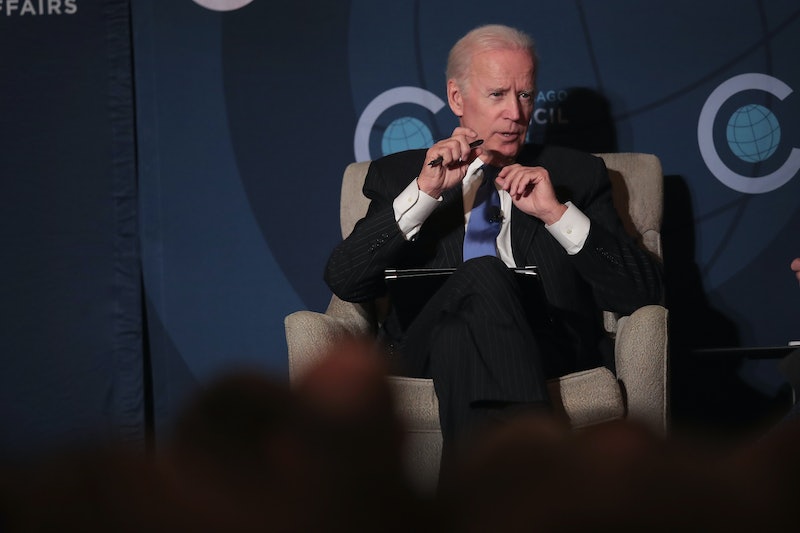 High-ranking politicians often pay visits to constituents who have lost family members in combat or in a national tragedy, but it's not quite so often that they return the favor. In his new memoir, Promise Me, Dad, Joe Biden writes that the family of fallen police officer Wenjian Liu came to comfort his family at Beau Biden's funeral in 2015.

On Dec. 20, 2014, NYPD officers Wenjian Liu and Rafael Ramos were murdered in their patrol car. At the time of his death, 32-year-old Liu was a newlywed who had recently purchased "a house big enough for his parents to live with him and his new bride," in Biden's words. He and his wife had talked about having children, but had not done so before he died. His wife Pei Xia Chen, who goes by Sanny, gave birth to her husband's daughter, Angelina, in Summer 2017, using sperm collected posthumously.

Biden and his wife, Jill, visited the Liu family in their home after Wenjian's death. Sanny translated for the fallen officer's parents, who felt more comfortable speaking Cantonese than English. In her bedroom, Sanny kept a picture of herself and her husband at their wedding, which had taken place only three months before he was murdered. Biden recognized something in Sanny Liu's sadness: the feeling he had felt, some 40 years earlier, when his first wife and young daughter were killed in an auto accident.

Biden writes that the language barrier prevented Liu's father, Wei Tang, from communicating his pain in the wake of his son's death, and that all the man could say to the vice president was "Thank you," over and over again. A few months later, Biden would lose his son, Beau, to brain cancer, and Biden would find himself in similar circumstances:

Of all the calls and visits that difficult week, all the heartfelt condolences and the well-wishes from the thousands of people who filed through the receiving lines, one stood out. It happened at the public wake, at St. Anthony's in Wilmington, on the day before the funeral mass. I was there with Jill and the rest of the family for hours, standing by Beau's casket, as thousands of friends, acquaintances, and supporters filed by. People came from all over the country — including the nurses from Walter Reed and Jefferson hospitals — but most were from Delaware. Our home state is a small space, and I had been there for so many years, so I recognized most of the mourners by face, if not by name. But at one point, I looked up at saw in the line, approaching me, Wei Tang Liu, the father of the Chinese American police officer who had been killed on duty in New York City five months earlier. He and his wife had made the three-hour drive from their home in Brooklyn to Wilmington, then stood for hours in a line of people that snaked for blocks down the sidewalk, into the church, and right up to Beau's coffin.

Wei Tang Liu did not try to speak, and neither did I. He still didn't have the English, and I still didn't have the Cantonese. He just walked up and gave me a hug. It meant so much to me to be in the embrace of somebody who understood. He held on to me, silently, and wouldn't let go. This was not, as it had been the last time we met, for him. This was for me. "Thank you," was all I could say. "Thank you. Thank you. Thank you."

Pick up Joe Biden's memoir, Promise Me, Dad, at your favorite bookstore on Tuesday. The audiobook version, read by the author, is available exclusively on Audible.

More like this
16 Novels That Paint A Realistic Portrait Of Abortion
By K.W. Colyard
The Families Of Grenfell Tower Are Still Waiting For Justice, Five Years On
By Bustle UK
Olivia Rodrigo’s Song Dedication To 5 SCOTUS Justices Sent A Strong Message
By Grace Wehniainen
10 Must-Read New Books Out This Week
By K.W. Colyard
Get Even More From Bustle — Sign Up For The Newsletter