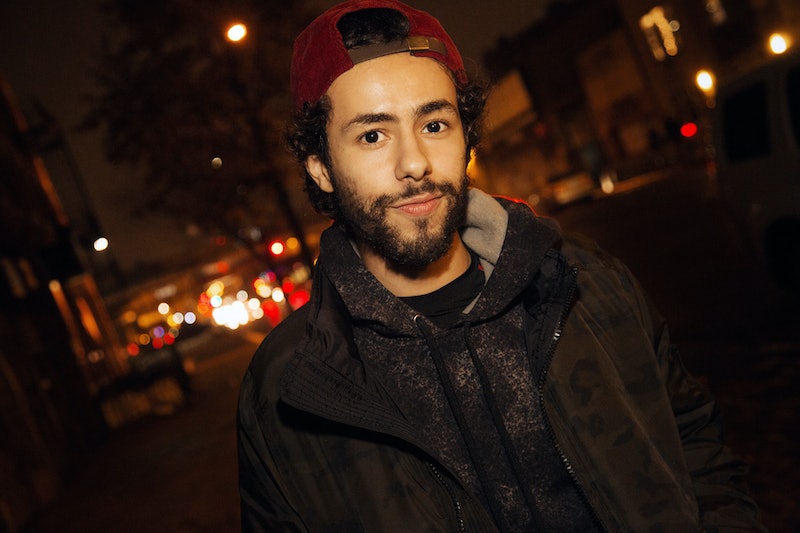 As become clears in his HBO comedy special, Feelings, Ramy Youssef doesn't shy away from difficult topics. The Ramy creator and star dissects the controversies surrounding Jussie Smollett, Michael Jackson, R. Kelly, and Harvey Weinstein — and that's just in the first half of the show. But what's most striking is the candid way he discusses his Muslim American identity, particularly when, in the closing moments, he says 9/11 actually brought him closer to his religion.

Youssef realizes it's a surprising statement, considering that since the 2001 attack — carried out by Islamic terrorist group al-Qaeda — Muslims have been unfairly targeted and discriminated against in America. "You ever think something that you like, don't want to think?," Youssef asks, continuing slowly. "I was thinking that, in this weird way, 9/11 made me more Muslim."

He explains that this is because, "I was told it was my fault. I was told that the most horrible thing that I had ever seen happen, to this day, was because of who I was, where I came from, the language that I speak, and my faith." As a result, he wanted to find out if that was true. "I realized, not only was that not true, but this was something that I really wanted to be a part of my life," he says. "I started praying, I started fasting, I started doing all these things that I might not have done. If 9/11 didn't happened, I might've just said, 'Yeah, my dad's from Egypt. Add the bacon.'" (For the uninitiated, Muslims abstain from eating pork.)

Throughout Feelings, Youssef talks openly about how important being Muslim is to him, though he admits to struggling with some facets of Islam (which is covered more in-depth on his semi-autobiographical Hulu show, Ramy). He explains that he started praying as a kid — by his own volition, not because his parents told him to — and that he began experiencing Islamaphobia at a young age.

After 9/11, he recalls that one kid at his New Jersey school tried gaslighting him into thinking he was related to Osama bin Laden, al-Qaeda's founder, and that people also thought he was related to one of the hjiackers simply because they had similar names.

That is, of course, only skimming the surface of what Muslim people have been forced to endure since 9/11. According to a 2015 report by the FBI's Uniform Crime Reports, hate crimes against Muslims are five times more frequent than they were before 9/11, per the Washington Post. And in a 2016 piece for Huffington Post reflecting on how the attacks changed their lives, Muslim Americans reported feeling their religion was generally misunderstood, having to stop wearing hijabs for their own safety, and being alienated, spit on, and told to "go home" on a daily basis. Notably, Adam Soltani, the executive director of the Council on American-Islamic Relations' Oklahoma chapter, said there was a noticeable drop in attendance at his mosque. "Normally about 150 people would attend the weekly prayer service, and [after 9/11] there were no more than 20 people," he said. And yet in spite of all that, Youssef felt more encouraged than ever to embrace his Muslim faith.

"Islam is stronger and America is weaker, all because of this one thing," he jokes. "And so the thought I had was...did 9/11...work?" For Youssef, it did... just not in the way it was intended to.

More like this
Alan Carr's 'Changing Ends' Is A Witty Sitcom Based On His Own Life
By Darshita Goyal
Ozzie’s Coming Out Scene With Kitty On 'That ’90s Show' Has Twitter Sobbing
By Brad Witter
"Lavender Haze" Star Laith Ashley Breaks Down Filming With Taylor Swift
By Jake Viswanath
All The Clues About Aly & Zach’s Relationship Status After 'The Bachelor'
By Brad Witter
Get Even More From Bustle — Sign Up For The Newsletter
From hair trends to relationship advice, our daily newsletter has everything you need to sound like a person who’s on TikTok, even if you aren’t.