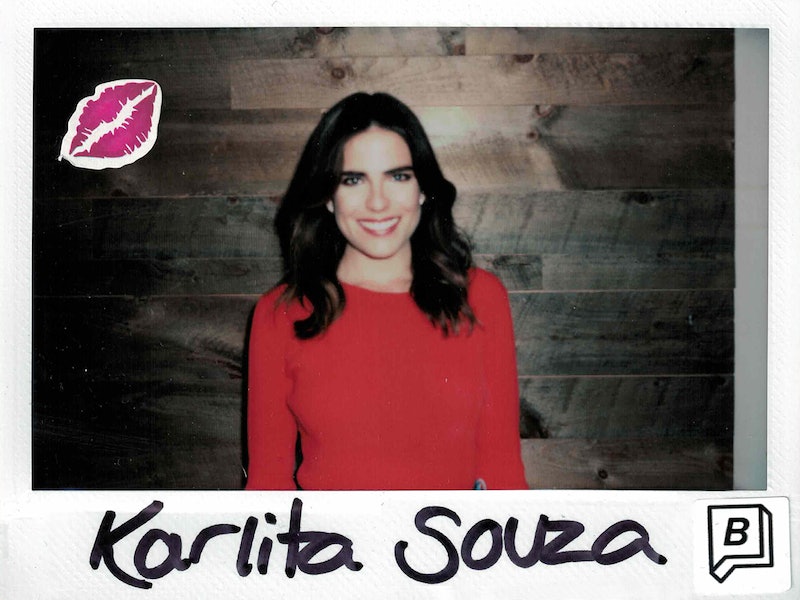 When celebrities come into Bustle HQ in New York, whether it's for a photoshoot, videoshoot, or a Facebook Live, we want to give them the chance to leave their mark. Literally. So we hand them a pen, a piece of paper, a few questions, and ask them to get creative. The rest is up to them. This time, actor Karla Souza is leaving her mark in the Bustle Booth.

You probably know Souza from her role as Laurel in How to Get Away With Murder, as the show helped propel her career to new heights in America. But Souza has been acting in Spanish-language films and shows for years. Recently she brought a little of both worlds to the table with her bilingual and bicultural rom-com Everybody Loves Somebody. Seeing her in a comedy rather than a drama like HTGAWM is definitely a different experience, but Souza's skills deliver in both genres.

When she recently stopped by the Bustle office to talk about that new rom-com (and reveal that she still wants Wes to come back to life on HTGAWM, which, like, same), Souza stepped into the Bustle Booth to get a little personal — and there's no denying her answers prove that she is definitely "unapologetically herself."