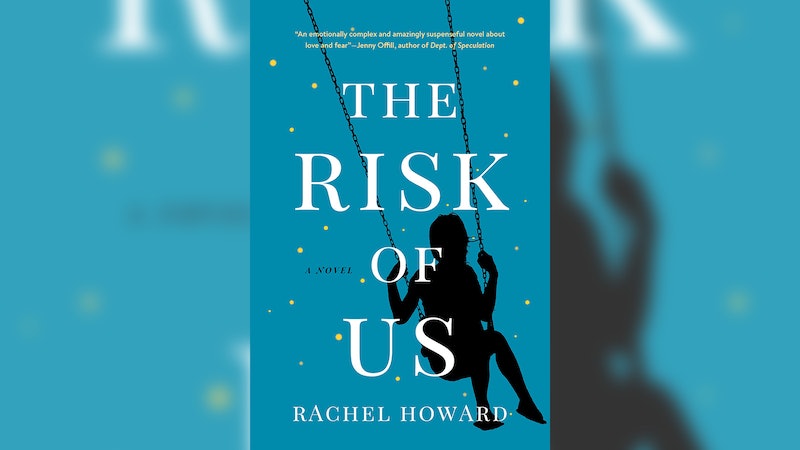 “I can be sanctimonious about love,” the nameless, 40-something narrator of Rachel Howard’s powerful first novel, The Risk of Us, says in the opening pages of the book. She and her husband, Sebastian, have just begun the complicated process of adopting a child through the foster care system. They’ve discussed ages and pasts and possibilities as they flipped through binders of available children. And they’ve fallen in love, in their first visit to a foster service agency, with a six-year-old girl named Maresa. Arrangements begin, but when Sebastian expresses concern, wondering if they should keep their options open, the narrator stops him: “It has to feel fated, I say. Like when I met you.”

Maresa is fierce and funny and artistic. She charms her would-be parents during her pre-placement visits with her operatic singing and her inventive goodnight kisses. She is also the victim of extreme trauma: A “broken nose, broken chin, broken arm, all acquired before age five”; she does not know her birth father, and her birth mother is reduced to “the facts of meth, heroin, hotels, prostitution.” Her beautiful voice screams “like a knife to the eardrum” well past midnight when terror has her clawing and retching into the darkness.

Maresa’s behavior baffles Sebastian, but not the narrator. She has suffered her own traumatic past. As a child her father was murdered in her home, an event she calls “the night of the blood,” and she has written a memoir about the past she has spent much of her life grappling with. This understanding forges an immediate bond for mother and daughter, but it does not make parenting any easier. If anything, the gap between what the narrator expects to understand about Maresa’s trauma and her actual experience of Maresa’s outbursts becomes a chasm she fears she will be unable to cross. Rather than feeling empowered to help Maresa, as she’d hoped to be able to do, each successive episode depletes the narrator’s best intentions.

This understanding forges an immediate bond for mother and daughter, but it does not make parenting any easier.

Howard, like her narrator, authored a memoir about her father’s unsolved murder (The Lost Night, published in 2005), and she brings her memoirist’s gift (or curse, as the narrator calls it) of disarmingly frank revelation to The Risk of Us. She captures soaring highs — “so many of them that I fill a notebook, like a newlywed cherishing fleeting sweetness” — alongside brutal lows, including a family vacation scene in which Maresa melts down after being refused a soda and repeatedly bashes her forehead against a desk leg. Howard never allows her narrator to resort to self-pity as she paints a clear picture of the beauty and difficulty of creating a family — especially later in life, as more and more women are choosing to do. In the early days of Maresa’s living with them, the narrator tells her husband that if she can just have four hours a day alone, she can manage. That bargain quickly becomes two hours. And even those two hours seem to slip through her hands.

'The Risk Of Us' by Rachel Howard
Amazon

The confessional tone of the novel allows for a complex emotionality to form around the ambiguity of the narrator’s desire to become a mother. In one scene, she calls Maresa’s way of describing the morning meal as “breaf-kast” one of life’s daily pleasures. But in another, she relays being asked if she’s having fun being a mommy: “Long after... I consider why it was so hard to respond. What it the phrasing of her question that disturbed? Maybe that’s the problem. This isn’t supposed to be about me. Of course there’s a simpler explanation for my silence: The honest answer was ‘no.’”

American culture tends to glorify motherhood, resulting in expectations that hurt mothers and stunt open, honest dialogue about how hard modern parenting can be. Howard’s portrayal of motherhood in The Risk of Us is the antidote to the Instagram hashtag filled with photos of glowing stay-at-home moms posed with their immaculate children and spotless kitchens. The narrator does not have pretend to have everything in order; in fact, the novel’s beauty and power arise from Howard’s skillful rendering of the at-times glorious, at-times bewildering, at-times harrowing process of raising a child. Here is the messy, frightening, complicated reality: Yes, the narrator is wearing cat-hair-covered yoga pants for the third day in a row, and yes, she misses her quiet life of books and gardening, and yes, she’s not sure she’s cut out for motherhood after all.

Howard’s portrayal of motherhood in The Risk of Us is the antidote to the Instagram hashtag filled with photos of glowing stay-at-home moms posed with their immaculate children and spotless kitchens.

And yet, for all her gut-punching honesty, the narrator remains essentially hopeful. This hope — in the profound power of unconditional love — helps her navigate the novel’s central conflict: will the couple finalize the adoption or not? The taut exploration of this inconceivable choice makes The Risk of Us utterly compelling. As Maresa’s fate waits in the wings, the narrator wrestles with her precarious privilege of decision. She speaks of mothers she teaches whose biological children suffer from autism and proprioceptive disorders: “They are stuck with these children. They love these children.” She admires these women, and she does not recognize herself among their ranks.

But the line that sets her apart from these mothers is thin. Despite being in a position to decide on motherhood, the narrator cannot escape the irrevocable impact that Maresa’s presence has had on her life. During Maresa’s absence over the course of a long weekend, the narrator and Sebastian attempt to settle in to their old ways, taking long walks, setting up a figure-drawing session in the garage. But their old life doesn’t seem to hang quite right: “It doesn’t feel like us anymore. You can’t just put things back in their old places.” In the end, the possibility of returning to their previous life seems like no choice at all.