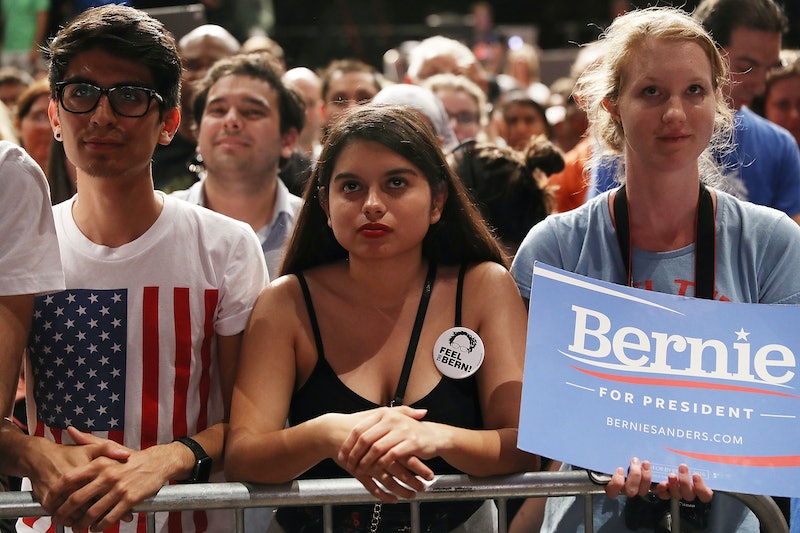 Scattered throughout an auditorium at Iowa Central Community College in Fort Dodge are people in their '20s and '30s listening intently to a conversation about the high cost of hearing aids. They say they've come to see a man they feel represents their priorities — so much so that they came to a town hall on senior issues just to hear him speak. And with two weeks to go until the midterm election, Sen. Bernie Sanders (I-VT) isn't mincing words.

"No group of Americans has more at stake in this election than millennial women," Sanders tells Bustle. "If people sit this out and don’t vote, and they allow Republicans to continue to control the House and Senate and the White House, this country is in for some very, very dangerous years to come."

Sanders' swing through Iowa is part of a nine-state tour to boost progressive candidates before Election Day. The pace of that swing feels fit for a marathon runner: four public events in three cities over two days. Two years after his raucous campaign for the White House, enthusiasm for the 77-year-old senator still runs high in the state that votes first in every presidential nominating contest.

"Everything that Bernie says about education and women’s health, you know, it sounds like dreams," Karen Vogel tells Bustle. The 24-year-old, who works at her family's print shop, came to Sanders' Fort Dodge town hall with her 15-month-old son, Bernie. She named him after the senator from Vermont. "It’s really what we wish could be America, all those wonderful images of America that Bernie paints for us," she says.

Sanders' goal on this midterms tour is to show local candidates how to turn out voters like Vogel. And if headlining these last-minute rallies stokes rumors of another presidential run in 2020, so be it. Sanders is one of many star politicians considered to be Democratic presidential contenders that have made their way to Iowa in recent weeks, including Sens. Kamala Harris (D-CA) and Cory Booker (D-NJ). But Sanders has logged the most face time with Iowans; in the 2016 presidential caucus there he coming close to beating Hillary Clinton — he lost by less than half a percentage point.

Sanders is trying to mobilize that grassroots support for other progressive candidates in the state, and in doing so he provides them with a blueprint for how to capture younger voters' attention. He peppers his speeches with specific call-outs to young women, including what he describes as Republicans' "very fierce and unified effort" to roll back abortion rights, oppose equal pay, and allow student debt to skyrocket.

"For those women who have kids, what’s at stake is whether or not we are going to have universal pre-K and affordable child care in this country or not, whether we stand up to the kinds of sexual assault which has impacted perhaps one out of four, one out of five women in this country," Sanders tells Bustle.

Sanders hammers President Trump during another rally in Sioux City for mocking Dr. Christine Blasey Ford, who accused Supreme Court Justice Brett Kavanaugh of sexually assaulting her in high school (Kavanaugh has strongly denied this). It's a major applause line that appears to resonate with the women in the audience, whose votes are critical for Democrats to turn out on Election Day.

And Sanders came prepared with a laundry list of even more reasons women should get to the polls on Nov. 6. Before blasting cuts to social security, he notes that women tend to outlive men. He rails against the cost of admitting a parent to a nursing home, and says cuts to Medicaid will make it worse; the responsibility of caring for aging parents traditionally has fallen on women. He couples his signature proposal for a $15-an-hour minimum wage with a call to "end the unfairness of women in America making 80 cents on the dollar compared to men." And he calls the Republican tax overhaul that passed Congress last year "outrageous and immoral" for its cuts to nutrition programs for low-income pregnant women.

While speaking with Bustle, Sanders is emphatic that only electing a Democratic majority in Congress can stop Trump's agenda, which includes some of those policies hitting women's wallets.

"He is appealing to, generally speaking, older white men who have a view of women which I suppose was fashionable 50 years ago, but obviously is no longer the case," Sanders says of Trump.

He describes his primary goal on the campaign trail this month as ending one-party rule in Washington, and to that end suggests Democrats do whatever they need to do to secure as many seats in Congress as possible. Sanders took some heat last year for endorsing a candidate in Nebraska who angered abortion rights activists with some votes he cast earlier in his career as a state lawmaker; at the time, Sanders said Democrats needed to endorse those kinds of candidates in red states to "become a 50-state party."

It's a move he stands by, even as concern for the future of abortion rights mounts following Kavanaugh's confirmation to the Supreme Court.

"If you’re asking me, will I turn my back on somebody in a conservative district who may have a different view than I do on abortion rights, no," Sanders tells Bustle. "I’m not going to turn my back."

"The question is whether the Democratic Party will be in the minority, and we’re going to have to see women’s rights to choose being taken away and all kinds of other needs for women and for the general population destroyed," he adds.

Sanders acknowledges on the trail in Sioux City that abortion is a controversial topic in Iowa, and says that he has respect for other points of view on the issue. He also goes after Republican candidates who campaign on limiting government interference in people's lives while at the same time trying to limit access to abortion.

"Let her make that decision, not the federal or state government," Sanders says to applause from the rally crowd.

Beyond abortion rights, young women who came out to Sanders' Iowa events say they hear their most pressing concerns reflected in the senator's policies. That includes everything from anxiety over their student debt, to paying for their families' prescription drugs, to the impact of climate change. It's environmental issues that partially drew twenty-year-old Julie Uwineza, a Congolese student at Iowa State, to Sanders.

"I feel like he talks mostly to young people," Uwineza says. "Honestly, I feel like all the young generation should be able to listen to him and hear his point of view because he’s perfectly connected with us."