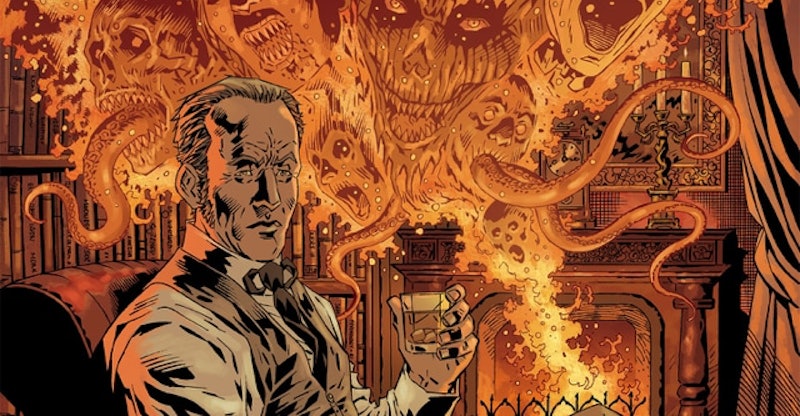 Podcast fans have a lot of fun to look forward to this winter, as the Lore spinoff comic, Wellington, makes its debut on Dec. 18 from IDW Publishing. Written by Lore creator Aaron Mahnke and sci-fi and fantasy author and comics creator Delilah S. Dawson, Wellington is a fictional comics series that follows Arthur Wellesley, 1st Duke of Wellington, as he hunts down the various monsters and mischief-makers that plague 19th-century England. In an interview with Bustle, Mahnke and Dawson talked about creating new, graphic fiction out of history and legend.

"Wellington takes familiar elements — folktales and creatures, historical figures and places — and stitches them together into something that’s fictional, but should feel right at home," Mahnke tells Bustle. "It’s almost like, if you’ve listened to all 129 episodes of Lore, you’ve crammed for the exam, and now you’re ready to read the comic with eyes wide open and see everything."

Wellington may be fiction, but the title character features prominently in European history. The real-life Arthur Wellesley began his military career in the late 18th century, and later served as a colonial governor in British India. In the Napoleonic Wars, Wellesley rose through the ranks to become field marshal, and, after securing victory over Napoleon Bonaparte in 1814, was named the 1st Duke of Wellington in recognition for his military achievements. He went on to serve twice as the British Prime Minister, from 1828 to 1830, and again in 1834.

In Wellington, the eponymous hero will hunt down monsters that threaten the safety of the British Empire and its subjects. Although Wellington fits into what you might call historical fantasy, the series is grounded as much as possible in reality.

"It’s a little trickier when you’re working in fiction," Mahnke tells Bustle, "because you want to tell specific stories, but you have to root it into specific facts. The Duke of Wellington is a known figure who was born and died, and we have those dates. So we have to find events that fit into his life at the right time."

That's a sentiment with which Dawson agrees. Working on Wellington, "was interesting for me," she says, "because I do a lot of my own work, [and] I do a lot of IP, and most of that IP is more like, knowing Star Wars your whole life or checking things on Wikipedia. But for this, we were dealing with Wellington, so I can’t just, say, make up a house. I have to say, 'Look, here is a link to Apsley House. It’s mostly the same as it was then. This is the room you’re going to be using. This is the layout of this room.'"

The enemies that Mahnke and Dawson's eponymous hero will fight in Wellington also have their basis in reality. Mahnke tells Bustle that an early episode of Lore, "Over the Top," shows why the Duke of Wellington makes for the perfect fantasy hero.

"[I]n the 1830s in London," he says, "the entire city was in a panic over this mysterious figure who was appearing in front of crowds [of] three or four people, usually women. There was some sort of physical assault involved, and then very creepy descriptions, like glowing eyes, spitting fire, weird clothing. He would escape by jumping over buildings and walls.

"The fact that the public panic grew so intense during that time that the Duke of Wellington — historically, on the record — got on his horse and grabbed his sword and went hunting for this Spring-Heeled Jack character really sparked an interest for me. Here you have something that’s frightening enough for an entire community to panic over, and he sort of, even in his retirement years, rose to the occasion and headed out to see what he could do."

Like Mahnke, Dawson says she's been thinking of the Duke of Wellington for quite a while. "I used a quote from him in my creator-owned comic, Sparrowhawk," she tells Bustle, "so he’s always been on my mind, too."

Dawson goes on to express her thoughts as to why the real-life Wellington remains relatable to writers and audiences, more than two centuries after the exploits that made him famous. "He started kind of low and he rose through these wars," she says. "He was out there in Waterloo, and he was Prime Minister. He was a known ladies’ man, and he has all of these pithy, funny quotes that make him — for a stiff-upper-lipped fancy dude — seem approachable, because he had these peculiarities and said strange things."

Mahnke and Dawson are not solely responsible for bringing Wellington to life. The duo worked with Sex artist Piotr Kowalski and colorist Brad Simpson to turn their historical fantasy into a finished, polished product. Kowalski also created the primary covers for Wellington, with Robert Hack (Chilling Adventures of Sabrina) creating the comic's secondary covers.

"[T]he covers are just really going to blow you away, I think," Dawson says. "The art is so gorgeous."

Both of Wellington's writers have a lot on their plates this year.

"I’ve had two Star Wars books out this year — Galaxy’s Edge: Black Spire and The Skywalker Saga," Dawson says, "and then I have out a Firefly graphic novel, called The Sting, that’s a lady heist in the Firefly ‘verse. I’ve got the trade paperback of my creator-owned comic, called Star Pig, also with IDW, which is about a giant, floating tardigrade and the teenage girl he’s accidentally swallowed. And then paperbacks of my various books that I have with Del Rey: No Country for Old Gnomes and The Princess Beard."

"I’m wrapping up the second season of Unobscured," Mahnke tells Bustle. "This season has been delving into the spiritualist movements of the 19th century — seances, automatic writing, levitation, and things like that. I’m almost done with the editing and recording for that, and it will continue to be released until the end of December."

In addition to "some other projects that are in development for audio," but which he "can't talk about... yet," Mahnke also has more Lore to release. "Lore just continues to grow and truck on. Every other week there’s a new episode out. There’s no breaks for that, no seasons. It just keeps going and, thankfully, keeps growing."

Aaron Mahnke and Delilah S. Dawson's Wellington, no. 1 is out on Dec. 18 from IDW Publishing.