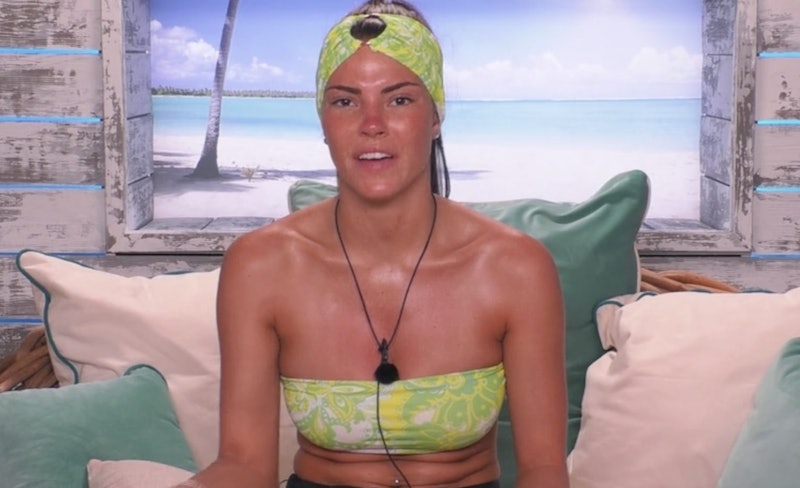 Alongside shock re-couplings, love triangles, and blossoming romances, if you’re entering the Love Island villa, you’ve got to be prepared to serve some looks. A plain bikini will only get you so far and if you want to get the villa (and Twitter) talking, you’ve got to shake it up a bit. This is something new girl Rebecca Gormley has clearly thought hard about. While her run in with Siânnise Fudge was enough drama for one episode, something else about Gormley caught the eye of fans. So, was that head piece actually a bikini? Love Island Twitter is about as divided as the villa itself when it comes to certain subjects, but Gormley’s unusual headband managed to unite fans of the show in their quest to find out what exactly was what.

Seasoned Love Island fans will know head pieces are a favourite look among contestants. In fact, series four’s Kaz Crossley became so well known for them that she developed her own headband line after leaving the villa. However, Gormley's matching bikini and head piece ensemble had fans talking for another reason, as no one could work out what was swimwear and what wasn't.

During episode 15 (aired on Jan. 26), Gormley emerged in a lime green bikini with a matching headband. While her co-ordination was on point, more than a few people had questions as to whether her head piece was actually swimwear. The lime green material was a perfect match with her swimwear and the ring detail at the front definitely gave it a bikini feel.

Fans were quick to get on Twitter and get to the bottom of Gormley’s outfit. One wrote, “Did Rebecca get her top and headband the wrong way round?” Another said, “Rebecca hun, your pants go on your waist, not your head.” And one got to the real question and asked, “what the f**k does Rebecca have on her head? Where do you even get a three piece swimsuit from?”

Even the voice of Love Island himself Iain Stirling got involved, saying “That’s what I like about Rebecca. She wears her heart on her sleeve and her bikini bottoms on her head.”

One good thing about Love Island is that, if you spot a bikini or outfit you like on the show, it’s relatively easy to find online. Especially since online store I Saw It First have partnered with the show to bring us all the best dupes and exact copies.

However, Gormley's bikini/head piece combo might be the best kept secret in the history of Love Island fashion. While there are some super similar bikinis on offer, none match the look Gormley was serving.

However, there may be one thing we can deduce, Sherlock Holmes style, from their website. Looking at the bikinis on offer at I Saw It First, we can see that the brand will often take one pattern and apply it across multiple different types of swimwear. Take, for example, their brown leopard print pattern (see below).

So, could this be where Gormely went wrong? It wouldn't be too outlandish to assume that the islander may have been sent two different swimsuits in the same pattern and mistook one for a head piece. Colour blocking is definitely a thing but pattern blocking? That's something new entirely... and I'm kind of into it?

I have reached out to both ITV's Love Island and I Saw It First to see if they can shed any light on this (very important and serious) investigation, but, at the time of writing, I am yet to hear back from them. Watch this space.

This article was originally published on Jan. 27, 2020