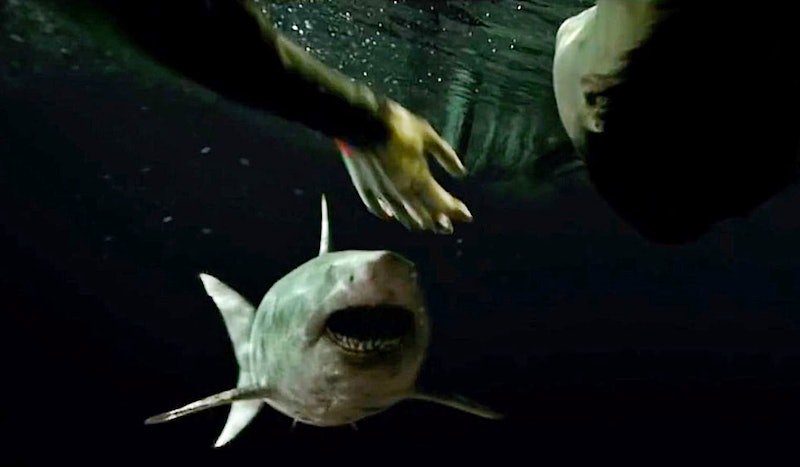 Just when you thought it was safe to take a cave dive, out comes a shark attack sequel to make you question even hopping into a pool's shallow end. In the Aug. 16 release, when four teen girls decide to explore the subterranean wonders of a Mayan ruin, they inadvertently position themselves as the next human sacrifices when they run into a swarm of Great Whites. It's dramatic, but is 47 Meters Down: Uncaged a true story in any way?

Soul Surfer this isn't. The film takes a few near-truths and bends them with artistic license. But when it comes to summer entertainment, isn't that what we really want? If this actually was a pseudo-documentary warning story about the dangers of shark attacks, it would be a lot more dishonest. The 2019 Yearly Worldwide Shark Attack Summary shows only 66 unprovoked attacks, a drop from previous years' averages. Four girls dropping into the territory of predatory creatures, even if inadvertently, doesn't really count as "unprovoked," and the reality is that humans do a lot more damage to the shark world than they do to ours.

None of the four teens in the film are based on any particular real person, though in the press notes for the film, director Johannes Roberts says he modeled their relationships after another director's style. “You have two step-sisters who don’t like each other, and one is bullied, and it resolves itself throughout the movie to a really cool ending that turns it all on its head. So that I really enjoyed — taking a John Hughes template and putting it into the world of sharks.” The Breakfast Club, but with far more deadly results!

However, there is one element of the movie absolutely based on reality, and lucky for all of us it's the coolest part: underwater Mayan ruins! In February 2018, per National Geographic, the Great Maya Aquifer Project announced they'd discovered what might be the most important submerged archaeological site in the world. Two underwater Yucatán cave systems previously thought to be separate were actually connected, and so far discoveries include pottery, bones, and even Mayan artifacts.

While the GMA team didn't run into any sharks (that we know of), German team leader Robert Schmittner told Mexican newspaper El Pais the 20-year search was "like trying to follow the veins within a body," adding, "it was a labyrinth of paths that sometimes came together and sometimes separated. We had to be very careful."

The best part for non-scientists is that one of the two cave systems, Dos Ojos, makes for some of the finest cave-snorkeling and diving around. If you ever find yourself there, you can swim with the fishes (tiny, non-threatening fishes) in massive, beautiful caves. If that still seems too claustrophobic and not quite as dramatic, there's also snorkeling at Playa Mia, where you can frolic among faux-Mayan "ruins" in the shallows with a guide and nearby waiting boat.

Of course, that might get a little too close to the plot of the original 47 Meters Down, the movie Uncaged follows up. But things worked out well enough for those gals... once they got past the sharks.