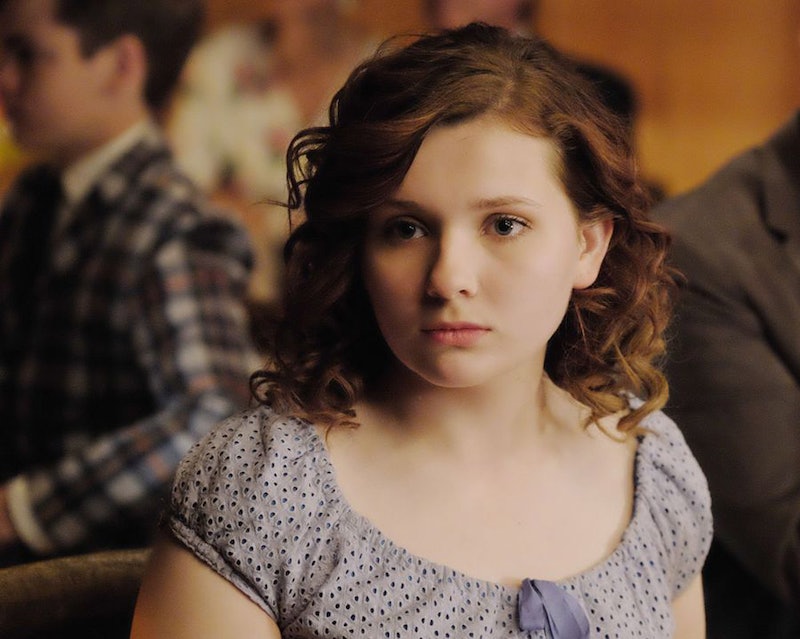 If you're going to revamp a movie as iconic as Dirty Dancing, you may want to give it a modern spin. In ABC's case, that meant transforming the 1987 romance classic into a musical TV special starring Abigail Breslin as central heroine Frances "Baby" Houseman. And while the rest of the cast is stacked with a trove of well-established actors, viewers may be wondering if their vocals are the real deal. So, is Abigail Breslin really singing in Dirty Dancing?

Why yes, yes she is. In fact, the actor is listed as an artist on three of the songs from the project's soundtrack, which was released on May 19, a few days ahead of the remake's May 24 debut. She first appears on "Whole Lotta Shakin' Goin' On," a hip-swinging duet with former Pussycat Doll Nicole Scherzinger, who plays Penny Johnson in the newly adapted film. Breslin also teams with Colt Prattes — who leads as Baby's love interest, Johnny Castle — for swaying ballad "Love Is Strange." And finally, she joins the entire Dirty Dancing cast for rousing finale number "(I've Had) The Time of My Life," a cover of the Academy Award-winning song created for the original 1987 feature.

For those familiar with Breslin's work, her appearance on the soundtrack shouldn't come as a surprise. Back in 2011, she performed a number of tunes for her starring turn in Janie Jones: she's credited on five of the movie's 11 songs. While promoting the project in an interview with Movieline, Breslin revealed the role had sparked her interest in pursuing music outside of acting. She told that outlet that after filming wrapped, she taught herself how to play guitar, took more vocal lessons, and began songwriting. She then started a short-lived band, Cabb, with her friend Cassidy Reiff.

In 2014, Breslin unveiled her first-ever music video for "You Suck," an acoustic pop number about an ex-boyfriend. The following year, she announced on Twitter that she was working on a debut album, The World Now, to be released that June, though it seems the record has since been shelved.

After that, Breslin shifted her focus toward her acting career, nabbing a recurring role on Scream Queens as well as parts in films like Maggie, Final Girl, and Freak Show. But perhaps her work on Dirty Dancing has reignited her interest in singing: In February, she lent her vocals to Stargroves' "Telephone."

It doesn't appear that Breslin has addressed the idea of revisiting music as of late, but based on her role in Dirty Dancing, it certainly seems like it could still be in the cards.