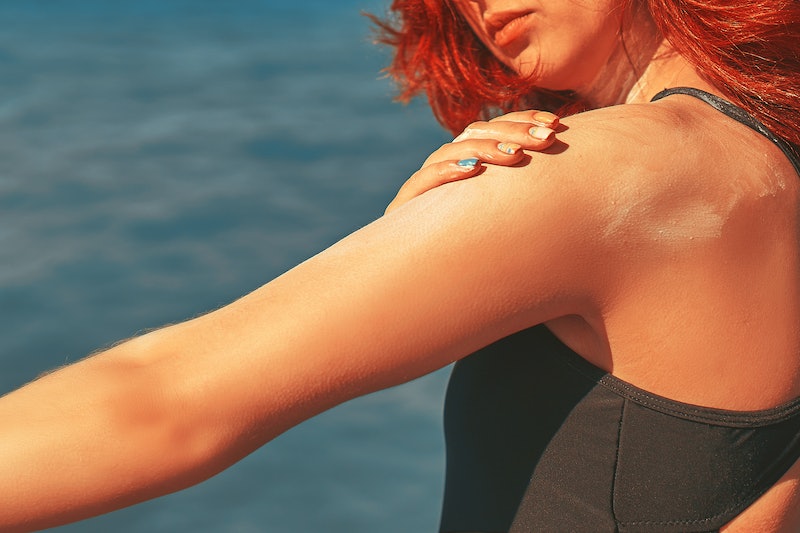 Although people try so desperately hard not to get sunburnt, the likelihood is that a lot of skin will be going pink, if not bright red, this summer. While this can easily be alleviated by proper sunscreen application, it's also handy to know just how to minimise the damage and pain sunburn will cause to your skin. Now, I ⁠— like many others ⁠— have always thought aftersun was the top remedy for sunburn. But some experts have shed doubt on that assumption.

"Aftersun formulas tend to have rich, thick consistencies containing oils, which create an emollient barrier on top of the skin, trapping in the heat in the upper layer of the epidermis and exacerbating the inflammation and ‘burn’ feeling on your face," skincare expert Michaella Bolder recently told the Independent.

That's a fancy way of saying that your go-to aftersun product could be making your skin feel hotter instead of cooler. Definitely not what you want. Bolder also advised people to watch out for chemicals or fragrances in ingredients lists as these "will just irritate the damaged skin."

But don't go throwing away your aftersun just yet. Some formulas, like La-Roche Posay's Posthelios, come as a lightweight gel that will allow heat to leave the skin. Others include plant-based ingredients designed to soothe and calm redness.

Aloe vera is touted as the plant to look for. As Healthline reports, it has been used as a skin remedy for thousands of years. Aside from a few older studies into aloe vera's healing and anti-inflammatory properties, there isn't much recent scientific evidence to prove the plant's medicinal benefits. But plenty of people swear by it.

You can apply pure aloe vera gel to sunburnt skin, but may want to do a patch test first to check for allergies. Alternatively, look for an aftersun containing it. Herbivore's After Sun Soothing Aloe Mist contains lightweight aloe water while Clinique's After Sun Rescue Balm is a face-friendly choice.

One thing to remember is that you can't completely fix the damage the sun causes to your skin. "You can, however, try to increase the DNA damage removal and repair, and try to make the skin look and feel better, which is most people’s primary concern," Dr. Harold Lancer told the Telegraph.

"The longer the heat from sunburnt skin is ignored, the longer the inflammatory proteins from it create a greater depth of damage to the skin layers, so the use of aftersun is completely valid.”

According to the NHS, other sunburn treatments include drinking plenty of water to prevent dehydration, taking painkillers if needed, and covering burnt skin from sunlight until it has fully healed. You may also want to take a cool bath, rather than a heavy-hitting shower.

The NHS also advises that you don't use petroleum jelly (otherwise known as Vaseline) on sunburnt skin, as this tends to trap heat in, that you don't apply ice directly to sunburn. If your skin is blistered or swollen, or if you feel hot, shivery, tired, dizzy, sick, or have a headache, temperature, or muscle cramps, you need to see a doctor or call 111, the NHS states.

The best course of treatment is not to get sunburnt in the first place. To do that, avoid the sun during the hottest times of the day (between 11 a.m. and 3 p.m.), apply sunscreen in the correct way, and reapply every two hours or immediately after sweating or swimming.