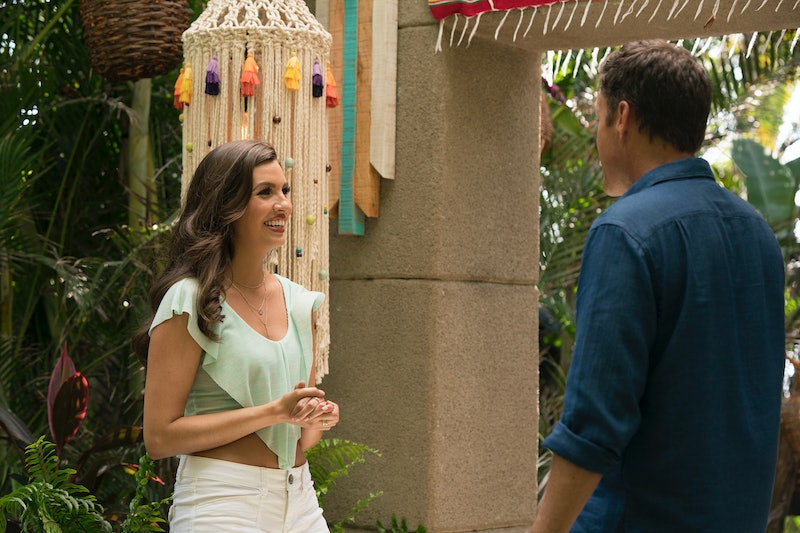 After a rocky start, the soap opera that was Angela, Clay, and Nicole has finally quieted down on Bachelor in Paradise. With the drama behind them, Clay and Nicole are now figuring out if they're ready to take the next step in their relationship or leave Paradise alone, while Angela seems to have really hit it off with Chase. However, it may not be a strong enough connection to move beyond a summer fling: all signs point to Angela still being single after BiP.

When the model, who appeared on Nick Viall's Bachelor season, arrived on the BiP beach, it was pretty clear the deck was stacked against her. She quickly became the topic of discussion — and scorn — with Nicole even going so far as to label Angela as "crazy" and "desperate" for coming on the show while Clay was there. (Nicole took to Twitter shortly afterward to publicly apologize to Angela.)

Clay also felt it was unfair to him that she was there complicating his time on the show, but Angela just wanted to get clarity about their sudden breakup and genuinely try to move on with someone else. As Angela told Bachelor alum Ali Fedotowsky-Manno on her Bachelor Happy Hour podcast, her version of the split was much different than the one Clay described earlier on the season. She said she was "kind of blindsided" when he decided to abruptly end things so he could "find himself," and that he'd been saying stuff like, "I wonder what our babies are gonna look like?" just days before. According to Angela, he even attempted to break up with her via text while at the gym, and only did it face-to-face because she insisted.

If that's the case, it's no surprise that Angela told Ali she was over Clay "as soon as he stepped on that beach." She then alluded to potentially having a new romance: "If I make connections, [then] I'm so excited. And I did."

Krystal Nielson was on the same podcast episode and confirmed that Angela was "the hottest ticket at the wedding," and revealed that between Clay, Chase, and Mike, Angela was getting "pulled into so many conversations."

Angela agreed, saying her focus for going on Bachelor in Paradise was never Clay, but exploring "two connections that [she] made at the wedding." Angela explained to Ali that she only put herself in the "weird situation" of being on that island because she saw genuine potential with "either of the connections" she had made. And considering she sent Mike packing, we have to assume Chase is her main focus right now.

On why she gave her rose to Chase instead of Mike, Angela told Ali and Krystal that her "romantic connection to Chase was just stronger." In the Sept. 9 episode, Chase did confirm this to Revian, saying, "She and I have connected pretty well." So maybe they're an item?

The fact that Chase and Angela's entire date last week wasn't even aired suggests that's maybe not the case, though. Perhaps the producers wanted the episode to focus on just Clay and Nicole or perhaps there just wasn't much of a spark.

Angela did call out the producers for skipping their whole date, saying there was even "a piano, some moonlight dancing." And Chase chimed in, saying, "I know right! We had way too much fun for that to be cut!"

Angela's Instagram account doesn't offer any hints about whether or not the two are still dating post-BiP. But even if they don't end up together, perhaps it's for the best. After all the overblown drama with Clay and Nicole, you can't fault Angela for taking some time to recenter. One of Angela's latest Instagram posts is a chill photo of herself with the caption "serene." Maybe she didn't find love in paradise, but hopefully at least she's found some peace.