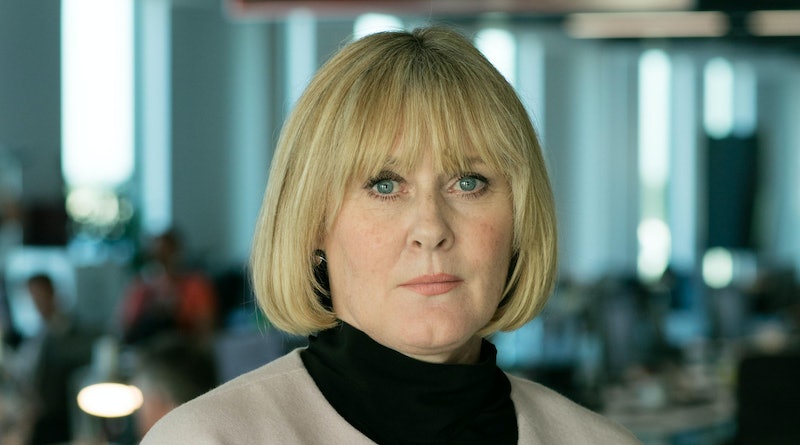 The BBC drama MotherFatherSon tells the story of a dysfunctional family at the heart of a media empire, the power of which has a profound impact on the state of British politics. The story is said to be fictional, however, many of the characters and storylines featured are suspiciously similar to various real-life figures and events. But is Angela Howard based on a real person?

Well, it isn't totally clear known if the character played by actor Sarah Lancashire is based on anyone in particular. I have reached out to the BBC for comment, and I'll update you once any new information becomes available. In the drama, Howard is a business woman turned MP who has been selected to lead the opposition party into the next election. While it's difficult to think of that many real life equivalents in British politics, there is a certain business man-turned-politician currently in the White House over in the U.S. So is there any chance that the character could have been somewhat inspired by Trump? Probably not, as according screenwriter Tom Rob Smith, who wrote the BBC drama said there weren't specific parallels to be drawn with real life figures.

Speaking at an event, he told The Express: "It's about the bigger picture of society in a general sense. We’re not getting into specifics like ‘this is about this politician, that politician or this media figure.' Everything was kept in a parallel universe."

However, he did reveal that the character of Max Finch, who is portrayed by Pretty Woman star Richard Gere, was actually inspired by some notable fictional and historical figures.

In an interview with the Guardian, Smith revealed that inspiration for Gere’s character was drawn from "fictional figures like Citizen Kane to historical figures like Joseph Pulitzer," and added "we were always clear that Max should be Richard’s creation from a charisma point of view but also because we didn’t want to come down on a real-life parallel because that would bring its own baggage."

Smith has admitted that elements of the show have been drawn from the "world we live in." According to the Express, Smith said, "We live in the world we live in. So we draw from it. We have to draw from what's going on, like the issue of the rise of populism." The 40 year-old also pointed out that he intentionally never mentioned a particular political party. Discussing Prime Minister Jahan Zakari (Danny Sapani), and the show's Leader of the Opposition, Angela Howard (Lancashire), Smith stated that viewers will only ever know "that he is the Prime Minister and she is the only one running against him."

MotherFatherSon's director, James Kent, has previously revealed that convincing megastar Richard Gere to appear in the series "wasn't easy." According to the Metro, Kent said "It was well worth the struggle and it took a long time, but he wanted to be sure. As an actor you put your faith in the production team and a director and Richard spoke to me about being things that just didn’t deliver. So he was quite cautious, he didn’t need to do this but he loved the scripts."

Well, thank goodness Gere did agree to take part in MotherFatherSon, because his presence in the BBC series perfectly rounds off the show's stellar cast and I can't wait to see how the story continues to unfold.

MotherFatherSon currently airs on Wednesdays at 9 p.m. on BBC Two.