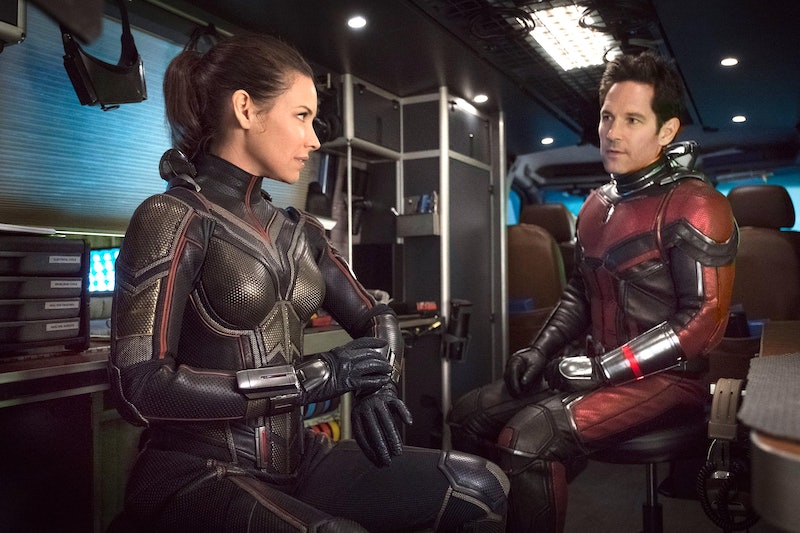 Let's get the joke out of the way early about whether seeing Marvel's tiniest superheroes on the biggest screen is worth your time, and get right down to business. If you're on the fence about whether you should see Ant-Man And the Wasp in 3D, the answer is yes; the action-packed Marvel movie is all about scale and dimension, and adding more of each actually makes for a better movie-going experience.

Normally the main metric for whether something should be seen in 3D is whether it was shot with the additional dimension in mind, and not just slapped together as a gimmick in post-production. Though Ant-Man 2 didn't use a 3D IMAX camera rig to film with (likely due to the prohibitive bulk and cost), the filmmakers did plan the action sequences with larger scale in mind, and the attention to detail combined with the scaling action means 3D will definitely enhance your viewing experience.

A special press release from IMAX about the film notes that "In IMAX theatres, scenes of Ant-Man and the Wasp will be specially formatted and presented in an expanded 1.9:1 aspect ratio. This means that only in IMAX will the movie fill more of the screen, and fans will see 26 percent more picture in IMAX than in standard theatres." To visibly see what IMAX is talking about, Redditer u/sanderobros made a short clip comparing stills from the IMAX and regular trailers of Ant-Man.

And though the sequel wasn't shot on IMAX standard cameras, there's little to worry about in terms of image degradation; the entire film was converted in post and remastered for IMAX formatting, and IMAX 3D technology recently took its own jump into the Quantum Zone with an upgrade to Laser technology. That results in brighter 3D, and many people's biggest complaint about 3D screenings is theaters forgetting to adjust projectors to the appropriate brightness, resulting in muddy, dark images.

Though Ant-Man 2 has the charm of Evangeline Lilly and Paul Rudd as leads, not to mention a scene-stealing Michael Peña, the real star of the movie is its action sequences. Vulture gave a big (backhanded) compliment to the film, noting that "several fights and chases are unusually fluid and well-choreographed for a Marvel movie." i09 noted, meanwhile, that director Peyton Reed really upped the...ante (sorry) on the film's visuals, pointing out that "There are many, many innovative uses of Pym’s shrinking technology... Then there’s the juxtaposition of the beautiful San Francisco settings with trips to the tiny, trippy Quantum Realm."

It doesn't hurt that, according to Variety, the film was shot on the camera that's the current darling of directors of photography all over Hollywood — the Arri Alexa 65, used to glowing praise in high-octane action films as well as unconventional comedies. Ant-Man and the Wasp is a direct mix of the two genres, as director Peyton Reed explained to CinemaBlend. "When we first started talking about what Ant-Man and the Wasp would look and feel like.. I definitely started talking about things like After Hours and Midnight Run, and these things where there's a lot of forward momentum," said Reed.

For those unfamiliar, After Hours is a bonkers Martin Scorsese black comedy about a hapless office drone trapped and lost in downtown NYC, while Midnight Run is an anti-buddy comedy road movie about a bounty hunter taking an annoying mark back to L.A., and a combination of the two promises a lot of on-the-run action with some offbeat humor running throughout. Adding an extra dimension to the works looks like it'll be worth your time.