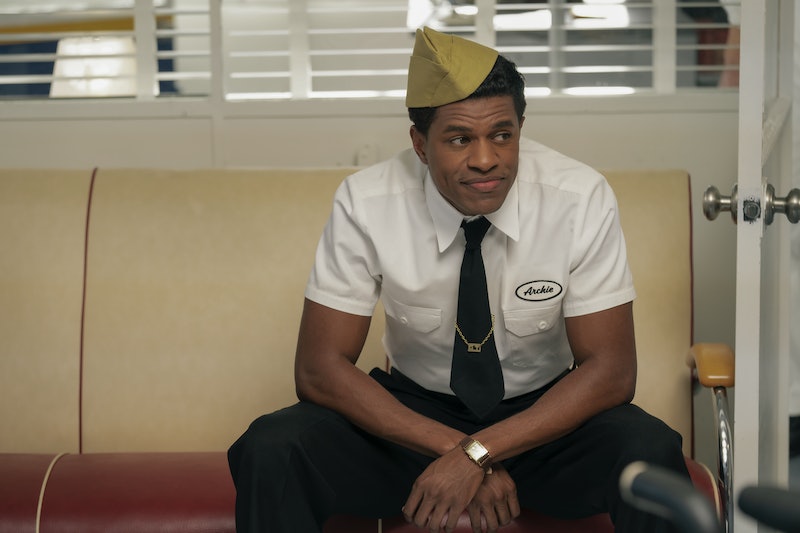 SAEED ADYANI/NETFLIX
By Gretchen Smail
May 1, 2020

Mixing fact with fiction, Ryan Murphy's Hollywood is a revisionist tale of Golden Age Hollywood that poses the question: what if homophobia and racism hadn't stonewalled the careers of so many marginalized creatives? You see this play out with Jeremy Pope's character, Archie, a gay, Black man who aspires to be a big name screenwriter. A few of the show's characters are based on real people, but it's unlikely that Archie is one of them. Instead, he seems to be an amalgamation of historical figures whose storyline embodies Murphy's optimistic retelling of history.

We're introduced to Archie through protagonist Jack Costello (David Corenswet), who, desperate to make ends meet, has recently begun working at a gas station that's a front for a male brothel. He storms out after refusing to have sex with a male client, and ignorantly headhunts Archie at a gay adult cinema by...dressing up as a cop, pulling a fake gun, and threatening to arrest him. Archie is understandably rattled, and it's only later that Jack explains he works for Ernie at the Golden Tip Gasoline, and he wants to recruit Archie because they need an employee who's open to having sex with men. Archie, who needs the money and was already using the cinema for sex work anyway, agrees to come onboard.

"[Jack is] very naive and very wide-eyed ... he is blind, for the most part, to the injustice [the other characters experience]," Corenswet explained to The Hollywood Reporter. "So, when he meets Archie, all he sees is another young guy who's struggling to come up and who's got to make compromises."

We learn later that Archie dreams of being a screenwriter, but he doesn't want to be pigeonholed into making stories only about Black people. Still, he says studios won't hire a Black writer, so he's currently writing cheap vaudevillian plays and hoping for his big break. By the end of the episode, you get a glimpse of what could be a dazzling opportunity: Archie sleeps with and forms a connection with Roy Fitzgerald, Hollywood's stand-in for famous actor Rock Hudson.

"There is a version of this where you could feel sorry for Archie, but I don't think the audience should," Pope told The Hollywood Reporter. "I felt it was important that we show a fighter, a strong, fearless individual who, at the same time, is extremely talented."

In an interview with Vanity Fair, Murphy said that the struggles of actors of color during the post-war era helped shape his vision for Hollywood. And in the show's first episode, Archie mentions filmmaker Oscar Micheaux and poet Langston Hughes, who he seems to be an equal amalgamation of. Micheaux created his own movie production company in 1919 and became the first Black director in the United States; the Producer's Guild of America have named him one of the most prolific Black filmmakers in American cinema. Hughes, meanwhile, was a successful poet and novelist who was known for his insightful and colorful portrayals of Black life in America from the 1920s to the 1960s. Critic Donald B. Gibson noted in the introduction to Modern Black Poets: A Collection of Critical Essays that Hughes "differed from most of his predecessors among Black poets in that he addressed his poetry to the people, specifically to Black people."

Though Archie tells Roy that he doesn't want to be just a Micheaux or a Hughes, it's clear that his character pays homage to both creators. Archie is shooting for the stars, and in Murphy's idealistic fantasy, he may just achieve everything he desires.