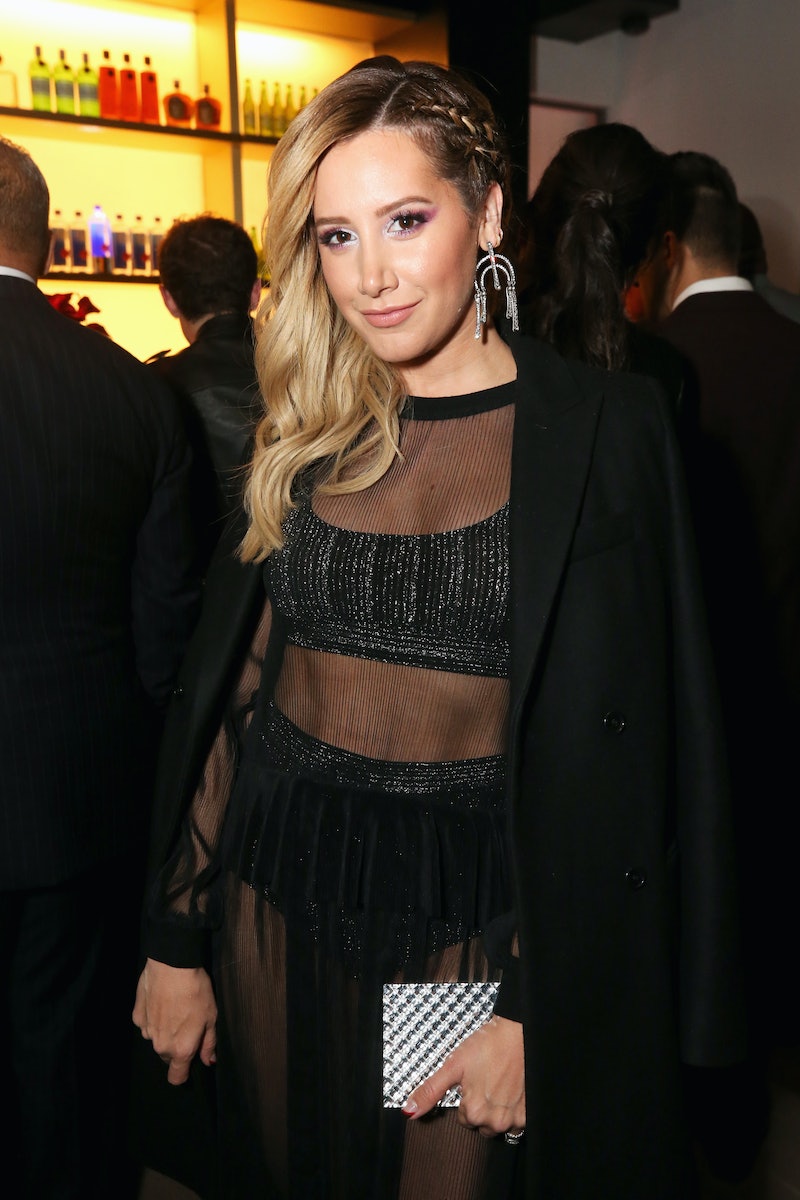 The bob has reigned supreme as the trendiest haircut of summer 2019. Ashley Tisdale got an asymmetrical bob and she is the latest in a long line of celebrities to go under the scissors for the this style. Earlier this year, Kim Kardashian, Reese Witherspoon, Mandy Moore, Emma Roberts, and January Jones, among others, committed to shorter hair through structured bobs. Tisdale's bob is short, dark, and asymmetrical. It's also the shortest she's ever gone. The actor and singer showed off her new look on her personal Instagram feed and in her stories on July 23.

Tisdale, who often rocks long, beachy, and buttery blonde waves, has proven to be quite the hair chameleon through the years. She has had pink hair, a textured lob, and other assorted styles. She has also flirted with being a brunette several times. This week, Tisdale returned to a chestnut brown shade and choppy layers, as indicated by the image that she shared on her feed. It could be the work of a wig or some seriously creative styling through tools and products. It's hard to tell from the photo. The only thing that is certain, however, is how awesome Tisdale looks with darker strands.

As Pop Sugar noted, Tisdale posted to her Insta story and talked about her role as Kayla in the forthcoming Netflix series Merry Happy Whatever. That could suggest that Tisdale's new 'do and hue are for the role itself. In those posts, you can see more of her bob's asymmetry. Her hair was wavy but much longer on one side than the other.

In the shot that she shared on her grid, Tisdale, who rocked statement lashes and light pink lipstick, posed next to nameplate referencing her character on the show. That's another possible hint that her shorter, darker, and totally rad new strands are related to the character. You can also appreciate the texture, the choppy nature, and the caramel highlights in this photo. As of press time, the post has already generated over 140,000 likes. So fans and followers of the former High School Musical star are feeling her latest coif change. Bustle reached out to Tisdale's reps for additional details.

Earlier this week, Tisdale shared a goofy selfie while rocking shoulder-skimming, dirty blonde and brown ombre waves and a major cat eye flick. Her hair change appeared to have happened very recently or while she was on set for her new acting gig. It's as though her bob is a bit of a mane mystery until she posts further images.

Tisdale has also gone back and forth between her signature and sunny blonde locks and varying degrees of brown. This chocolate-colored and top-knotted style from June 2019 was a gloriously natural and messy look. It also represented an intimate moment shared with her fans.

The star also crushed a millennial pink, center-parted bob back in December 2018. She was clearly on the bob train before the trend exploded, and both the cut and color were fantastic. The soft pastel shade also matched her lipstick, which is always a cool touch.

There's no telling whether or not Tisdale's brunette bob is dictated by her new role or if she will commit to the shape and shade. Real or not, you'll still be inspired to copy it since it's such a rad look for summer.