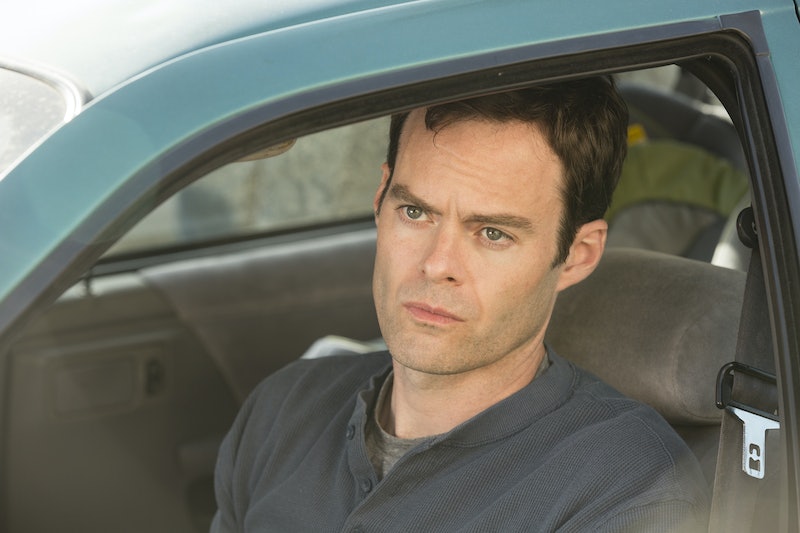 Bill Hader hung up his sketch comedy hat long ago — save for a recent return to host on Saturday Night Live — and the one he's putting on now is one that's equally outrageous, but a little more troubling. With Barry, which premieres on March 25 on HBO, Hader plays an extremely skilled assassin who realizes his true passion isn't necessarily killing people, but instead, acting. So, is Barry based on a true story?

Well, the themes are rooted in reality, but the assassin plotline appears to be entirely fictional, which is probably a good thing. In Barry, Hader's character grapples with the fact that despite his knack for assassinating people, it's simply not what brings him the most joy in life. This, according to Hader, directly mirrors some of the struggles he had during his nearly eight-year run on SNL. "On SNL, I was OK with the sketch stuff, but the live thing was hard for me," Hader said, according to Deadline. "I had a lot of anxiety."

Despite his insecurity that often surrounded Saturday nights, he was still quickly a fan favorite, with characters like Stefon, elderly newsman Herb Welch, and Devon, his "Californians" alter-ego all becoming enduring and recurring staples of the show. But even though he was flawless onscreen, at home it was another story.

"I love the people there, but doing that show was really hard for me," Hader said in an interview with GQ. "It was this funny thing of being trapped by this thing that was hurting you. I had to go to a therapist and do meditation—all these things to try to calm my nerves. It was becoming really detrimental for my performing." And so, the plot for Barry was born. According to the same Deadline article, Barry's situation mirrored Hader's because they both were talented in doing something they didn't necessarily want to stick with for the long haul — Barry with murder and Hader with live comedy.

Hader's talent is undeniable, but according to GQ, the nature of SNL made it difficult for him to feel like he was consistently harnessing it. The show requires quick turnaround on a constant stream of content, oftentimes thrown together at the last minute if something big happens in the news. It's not always the place for methodical or planned out work, and Hader felt that. "SNL took all the romanticism out of writing and acting and being an artist," he said in the same interview. "It was like, 'We go on at 11:30. Come on guys, we gotta go.' I couldn't wait for the muse to come to me. That's not the way it works."

It seems that in a format like Barry, Hader is able to more purposefully craft what he's trying to do. "He had to learn a little bit to relax and trust the process," co-creator Alec Berg told GQ in the same article. "When you're editing something you can do six cuts of it. He would approach those things like, 'What if it doesn't work?' Then we change it! I think it just had been drilled into him over eight years that you just get one shot. But he calmed into the process. This is the perfect way of working for him."

Hader said he now feels more confident in his acting abilities — projects like The Skeleton Twins helped him come to terms with the fact that he's got the chops of a bona fide actor. And that bodes well for Barry. "I was so trepidatious. I was afraid of failing, and you have voices in your head that aren't you," he told GQ. "And you have to work through that. It's easy to go, 'F*ck that!' And you just have to move forward with it and take a risk. Barry took a big risk." So, though Barry isn't necessarily based on any real-life assassin, the themes of anxiety and fear of being stuck in something that isn't your passion are very real, and Hader is an expert in that arena.