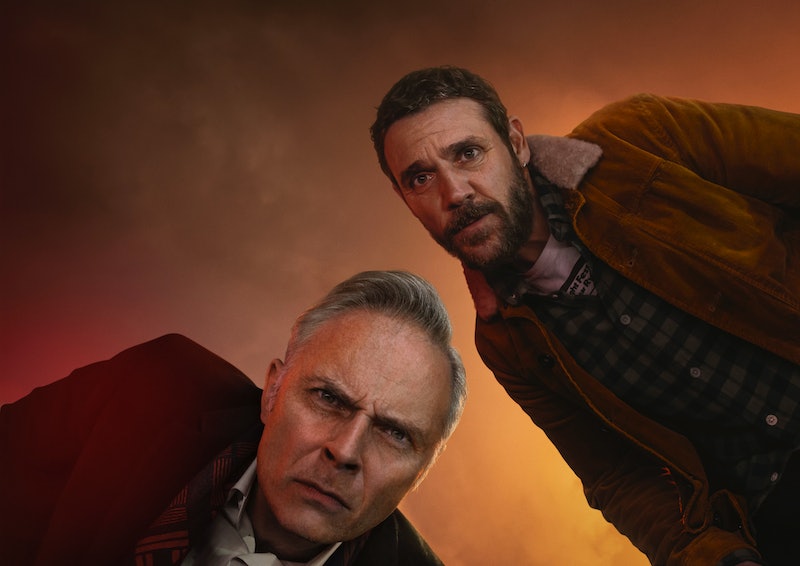 BBC Two's Guilt follows the story of brothers Max and Jake, who after accidentally running over and killing an elderly man, set out to cover up their crime and escape the mounting suspicions surrounding their involvement. The cast of the black comedy is headlined by Humans star Mark Bonnar and Chernobyl's Jamie Sives. But is Guilt based on a true story?

Well, details surrounding the story's origins are unclear, but I have reached out to the BBC for comment, and will update with more information once it becomes available.

The BBC thriller was written by Neil Forsyth, and centres around brothers Max and Jake, who unintentionally run over and kill an old man whilst on their way home from a wedding. Following the fatal accident, the siblings agree to try and cover up the incident, and hope the death isn't deemed suspicious by local authorities. However, questions surrounding the brothers supposed innocence emerge from those closest to them, and desperate attempts to conceal their involvement turn the life they once knew upside down.

Although we're not sure if the series is based on a true story or not, the friendship between the show's two main stars appears to be very real indeed. Speaking to the BBC, actors Mark Bonnar and Jamie Sives, who portray the characters of Max and Jake, first became acquainted at just 11 years of age, whilst both attending the Leith Academy school in Scotland.

Despite their long history, the pair have never actually worked on the same projects, which meant Guilt presented the perfect opportunity for the actors to finally work together. Speaking about the BBC black comedy, Bonnar revealed that during the show's conception, there was "nobody else in mind to play" his on-screen brother, and described Sives casting as a "match made in heaven." Show-writer Neil Forsyth and director Robert McKillop appeared to mirror the actor's enthusiasm, and later credited the pair's off-screen relationship for contributing greatly to the series overall — describing it as a "gift to the story."

According to iNews, the drama is set within the Scottish capital city of Edinburgh, and in addition to Bonnar and Sives, the cast of Guilt includes Emun Elliot, Sian Brooke, Ruth Bradley, and Ellie Haddington. So, if you're as excited as I am to delve into this brand new six-part series, you can catch Guilt on Wednesday, October 30 at 9 p.m. on BBC Two.

More like this
Twitter Simply Couldn’t Cope With The ‘Happy Valley’ Finale
By Sophie McEvoy
Claire Foy Spoke Out About 'The Crown's Gender Pay Gap
By Sam Ramsden
Olivia Colman Stars In First-Look Trailer For BBC's 'Great Expectations'
By Sabah Hussain and Sam Ramsden
9 Time Catherine Cawood Was An Absolute Badass In Happy Valley
By Sophie McEvoy
Get The Very Best Of Bustle/UK
Sign up for Bustle UK's twice-weekly newsletter, featuring the latest must-watch TV, moving personal stories, and expert advice on the hottest viral buys.