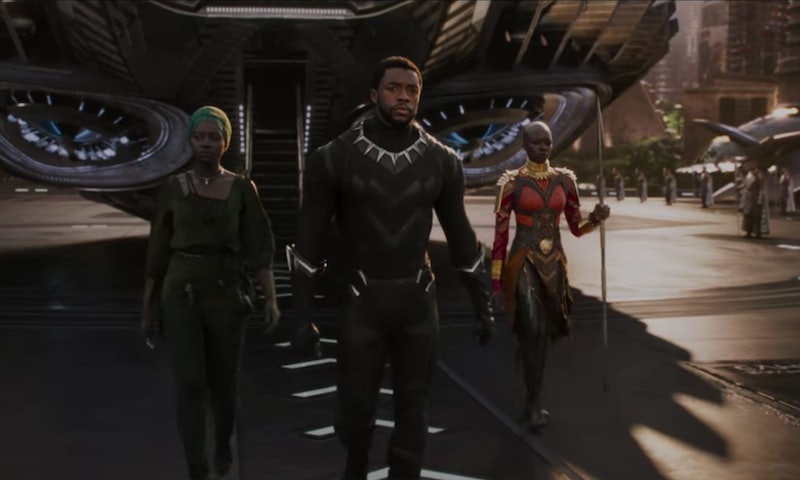 As one of the biggest films of the year so far, it's no surprise that Black Panther is leading the charge on Monday night's MTV Movie & TV Awards with seven nominations. Considering that kind of acclaim, you might want to revisit Wakanda before the ceremony. But is Black Panther streaming anywhere that you can easily watch?

While the box office record-breaking Marvel blockbuster is not yet available on Netflix, according to CNET, you can buy or rent the movie via iTunes, Amazon, Google Play, Vudu, and Movies Anywhere. And if you prefer to streamline and stick with one streaming service, don't worry: Black Panther is also expected to hit Netflix before the end of the year.

That kind of haste makes total sense considering how popular the movie has been with fans. At the MTV Awards, Black Panther racked up a slew of nominations, including in the Best Film category, while its star Chadwick Boseman, who plays the film's namesake hero — also known as King T'Challa — is up for both Best Performance and Best Hero. Michael B. Jordan, who played Erik Killmonger, the film's bad guy, was nominated for Best Villain, and Boseman, Lupita Nyong'o (Nakia), Danai Gurira (Okoye), and Letitia Wright (Shuri) got a nod in the Best On-Screen Team category. Wright was also nominated for the Scene Stealer award, and Boseman and Winston Duke, who plays M'Baku, were recognized for their onscreen brawl in the Best Fight category.

Considering the massive success of Black Panther — which grossed over $1.1 billion worldwide — it comes as no shock that Marvel President Kevin Feige confirmed in a March interview with Entertainment Weekly about the studio's upcoming projects that a sequel is already in the works.

"Nothing specific to reveal [about the sequel], other than to say we absolutely will do that," Feige told the magazine. "One of the favorite pastimes at Marvel Studios is sitting around on a Part One and talking and dreaming about what we would do in a Part Two. There have been plenty of those conversations as we were putting together the first Black Panther. We have ideas and a pretty solid direction on where we want to head with the second one."

That may not be the only Wakanda-set film on the way, either. Feige teased the possibility of a few spin-off movies focused on female Black Panther characters like Shuri and Okeye, who play just as big a role in defending Wakanda as the male characters. Feige said,

"I think Shuri's astounding, and you’ll see much more of her in our universe. Okoye, I think I’d watch three action films just Okoye. I'm not saying we’re doing that, but I’m saying that we’re intrigued by them. Frankly, as I’ve said before, finishing these first 22 movies is really all we're thinking about at this point."

While Feige said there was no guarantee of any such films, it seems Black Panther director Ryan Coogler would be on board. According to Variety, during a talk at the Cannes Film Festival in May, the filmmaker said he would be absolutely be interested in a female-led version of the movie. Coogler referenced a stretch of Black Panther in which the women are the focus after T'Challa is badly hurt, saying, "That part of the movie you feel like you’re watching something fresh and new. That part of it was exciting."

Mentioning Nyong'o, Gurira, and Wright, Coogler added, "We have these actresses who could easily carry their own movie. Some of them have before. We were so fortunate. I would watch a movie with them."

While there's no confirmation on when the Black Panther sequel will be released, or if any spin-offs of the movie will happen for sure, you can stream Black Panther online now. It'd be a great call to catch up with T'Challa and the rest of the Wakandan people before the MTV Movie & TV Awards airs on Monday night.

More like this
Everything You Need To Know About The 'Knives Out' Sequel
By Grace Wehniainen
The 'Hocus Pocus' Sequel Finally Has A Release Date & It Makes Total Sense
By Shannon Barbour and Radhika Menon
Everything To Know About 'The Hunger Games' Prequel Movie
By Grace Wehniainen and Radhika Menon
Sadly, You Can’t Stream 'Minions: The Rise Of Gru'... Yet
By Morgan Leigh Davies
Get Even More From Bustle — Sign Up For The Newsletter