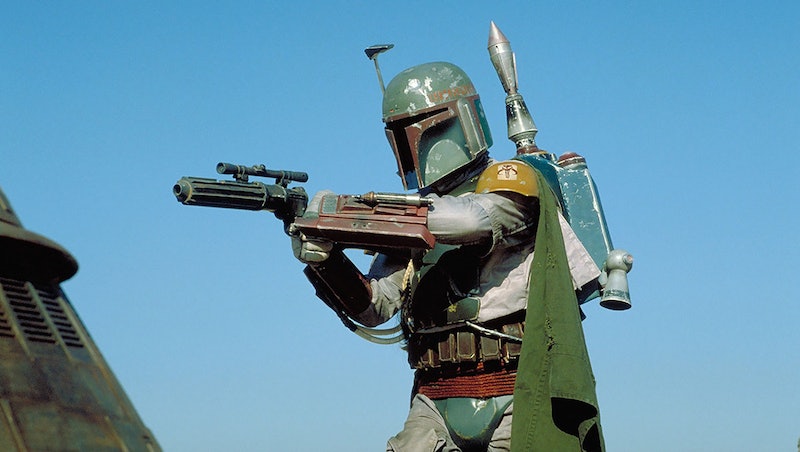 Boba Fett didn't have a lot of screentime in the original Star Wars movies. But his impact has been felt since The Empire Strikes Back in 1980 and now in Disney+'s The Mandalorian. If you believe the people behind-the-scenes, Boba Fett won't appear in The Mandalorian. That makes sense considering that the bounty hunter apparently died in Return of the Jedi and The Mandalorian takes place after the events of the 1983 film. But even if fans might be disappointed that Boba won't return to the screen, The Mandalorian is a testament to his character's influence in the franchise.

Boba Fett first appeared in The Empire Strikes Back as a heavily-armored bounty hunter working for Jabba the Hutt and Darth Vader. (As Sideshow reported, Boba was actually first introduced in a short TV animated holiday special before The Empire Strikes Back and was later added in an updated edition of A New Hope.) With only less than 10 minutes of screentime in the original movie series, Boba met his demise when Han Solo rather unintentionally set off Boba's jetpack and launched him into the Sarlacc pit that was supposed to have consumed Han, Luke, and Chewbacca. But that wouldn't be the end of Boba's story.

Boba's death did not fit his legendary status, but Star Wars added to his saga when his character was featured as a child in the prequel movie Attack of the Clones. In the 2002 movie, it was revealed that Boba was not technically a Mandalorian from the planet Mandalore — he was a clone of the Mandalorian bounty hunter Jango Fett. Jango's DNA was the template for all of the Clone Army of the Republic (a predecessor to the Stormtroopers of the Empire). Jango raised Boba as his son and after he watched his father be killed, Boba grew up to be the most dangerous bounty hunter in the galaxy.

Boba has also been featured outside of the film franchise and in the non-canon expanded universe of Star Wars, entitled Star Wars Legends. In Star Wars Legends, Boba did not die. But in the official narrative, the last viewers saw of Boba was in the Sarlacc pit. Still, fans have debated Boba's fate with Inverse outlining a newer theory that suggests that Boba could have escaped the pit and still be alive during the events of the 2017 film The Last Jedi.

Yet, the people behind The Mandalorian have stated that the Disney+ series isn't about Boba. The official synopsis is, "After the stories of Jango and Boba Fett, another warrior emerges in the Star Wars universe." Creator Jon Favreau, executive producer Dave Filoni, and star Pedro Pascal also discussed how Pascal's Mandalorian is not Boba to Entertainment Weekly and noted how one of the main differences between the character is their cultural identities. "Boba Fett is a clone, according to Attack of the Clones, and by asking [creator George Lucas], he would say Boba Fett is not Mandalorian, not born on Mandalore," Filoni said. "He's more of a person indoctrinated into it, into the way of life, and gets a hold of the armor." Favreau added, "Our guy is a Mandalorian, and we definitely explore the culture of the Mandalorian."

The distinction is tricky since Boba didn't choose to be a clone. But perhaps further proof that the unnamed Mandalorian is not Boba is the cultural backgrounds of the actors who portrayed the characters. While Boba and Jango Fett were both played by New Zealand actors of Māori descent in the prequel film, the Mandalorian is played by Chilean-born actor Pascal. So rather than be related, it seems the Mandalorian is from the same planet and people as Boba's "father" and shares in their position of bounty hunter.

Even so, there's no denying the Mandalorian will give viewers Boba vibes. "The Mandalorian is a mysterious, lone gunfighter in the outer reaches of the galaxy," Pascal told EW in another interview. "Mando" (as he's referred to) also has impressive gear like the original character with a ship called the Razor Crest. Yet, Pascal said in his EW interview with Favreau and Filoni how Mando is less of a villain that Boba was. "Ultimately he wants to do the right thing," Pascal said. "But his duties could very much be in conflict with his destiny and doing the right thing has many faces. It can be a very windy road."

Simply because Pascal's character isn't Boba Fett doesn't mean fans should completely give up hope of a Boba cameo. Perhaps he somehow did survive that Sarlacc pit and returns to the planet of his father. Or perhaps he could still be present in the form of other clones of his father if they weren't all destroyed or Jango's DNA is still available. But while it's hard to imagine the show occurring without Boba's iconic status, Pascal's character will be making a name for himself all on his own in The Mandalorian.

More like this
Netflix Shut Down 'Bridgerton' S3 Rumours About A “Very Dark” Storyline
By Bustle
'The Queen’s Gambit' Season 2 Tweet Wasn’t From Anya Taylor-Joy
By Mary Kate McGrath, Jack Irvin and Grace Wehniainen
Kukulkan From 'Wakanda Forever' Has A Surprising Connection To Marvel History
By Grace Wehniainen
Everything To Know About 'And Just Like That...' Season 2
By Jack Irvin and Grace Wehniainen
Get Even More From Bustle — Sign Up For The Newsletter
From hair trends to relationship advice, our daily newsletter has everything you need to sound like a person who’s on TikTok, even if you aren’t.