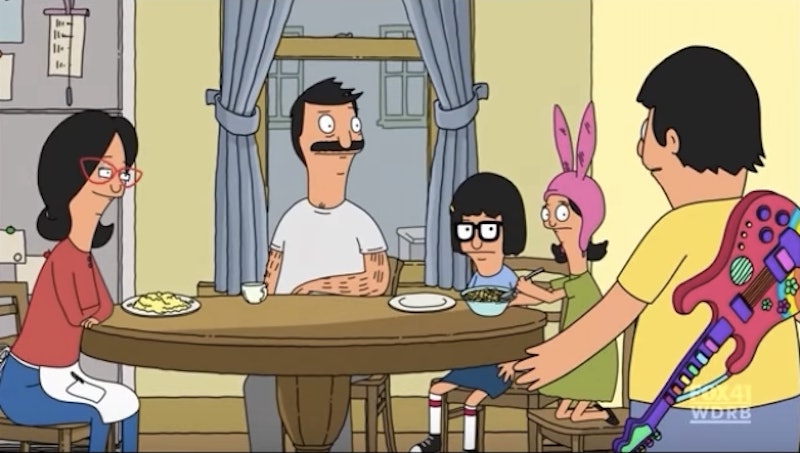 It's a tale as old as time: A television show (Sex and the City, Starsky and Hutch, Twin Peaks) bites the dust, and then later, fans get tossed a bone — a movie based on the TV show. So, is Bob's Burgers ending? After all, 20th Century Fox announced a Bob's Burgers movie on Wednesday, and for some TV series, that might spell death. But don't worry, it honestly doesn't seem likely. If anything, this is just the beginning.

For one thing, the series won its second Outstanding Animated Program Emmy this year (and has been nominated for an Emmy for the last six consecutive years, suggesting they're doing something right). The comedy has also won four Annie Awards, two Casting Society of America Awards, and a Writers Guild of America Award, implying critics love the show almost as much as you do.

No wonder fans are getting a movie. According to Deadline, series creator Loren Bouchard waxed lyrical about how superlatively awesome the film will be, saying, "We know the movie has to scratch every itch the fans of the show have ever had, but it also has to work for all the good people who’ve never seen the show." He continued,

"We also know it has to fill every inch of the screen with the colors and the sounds and the ever so slightly greasy texture of the world of Bob’s – but most of all it has to take our characters on an epic adventure."

In summary, according to Bouchard: "It has to be the best movie ever made. But no pressure, right?!" That's an awfully big check he's writing with his mouth — let's cross our fingers the film can cash it successfully. The movie's set release date, July 17, 2020, suggests he might be for real, because that is a long time to wait, and hopefully this means no expense is being spared in bringing the Belchers' lavish misadventures to the silver screen.

That would make sense, because it's hard to think of a TV community as passionate as fans of the Belcher family. The premiere of Season 8 of Bob's Burgers just went ahead and proved it — the producers had previously asked fans with animation experience to submit their work and the end result was stunning, being entirely composed of 62 different artists' fan art. According to BuzzFeed, Bouchard stated that they didn't want the "best drawings," that instead, he wanted "it to feel like it feels when you're online and you stumble across somebody's fan art — and maybe that fan is a kid, but some of those drawings have more life and energy in them than what we could draw."

There's something in this — if you search for #bobsburgers on Instagram, you get over 400,000 results, a few are just shots of the show, but most are fans' tributes to their favorite cartoon, whether via costume or drawing. It's the sort of show that fans connect with on a personal level, despite the extremely specific characters (a teen girl who's obsessed with boys' butts, a tiny sociopath in bunny ears). Presumably the "life and energy" found in these shots is exactly what the series creator was hoping to recreate onscreen.

It took The Simpsons almost 18 years of being on the air before they got to make the leap to film — Bob's Burgers will do it in just half that time. But why be surprised? With the incredible comic chemistry shared by the characters (who often hang out at home, lobbing jokes at each other) and the unforgettable burger puns, combined with the genuine fan passion for the series, this isn't too soon. So, pre-order your 2020 diary. You've got a date for July 17.