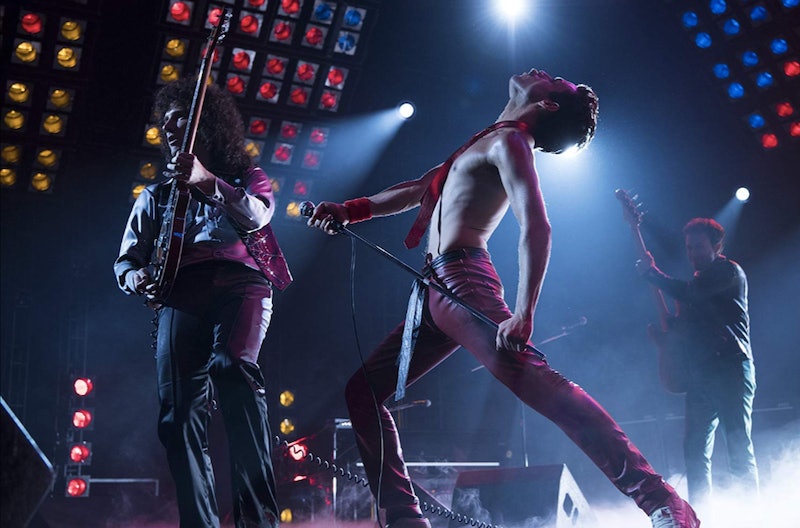 Nominated for five Academy Awards including Best Picture, Bohemian Rhapsody is the extremely divisive dramatization of Queen frontman Freddie Mercury’s incredible life story. And with the Oscars coming up on Sunday, Feb. 24, Queen fans who haven’t had a chance to watch it will want to do so from the comfort of their homes before the film potentially wins the coveted award. But is Bohemian Rhapsody on Netflix?

Unfortunately, Netflix has yet to release a statement about whether the film will join the streaming site anytime soon. But luckily, there’s still a chance to watch it online. The bad news is that it’s for a fee. Amazon has the option of renting or buying the digital movie, and the DVD and Blu-Ray versions are available as well.

By purchasing the movie on digital or Blu-Ray, you'll get to enjoy bonus features, including the full recreation of Queen's Live Aid performance, a portion of which was shown in the theatrical version. The full set is 22 minutes long, per Consequence of Sound, and includes performances of "Crazy Little Thing Called Love" and "We Will Rock You" in addition to the medley seen in the theatrical cut.

The movie is also available on YouTube, Vudu, and Google Play.

While Bohemian Rhapsody isn’t on Netflix yet, there are still other Best Picture nominees that you can watch on the streaming site, including Black Panther and Roma. Meanwhile, A Star Is Born, Green Book, The Favourite, and BlackKklansman are available to watch on Amazon. (Vice will be added to Amazon soon, but is available to pre-order.)

Many of the films nominated for Best Picture this year mark milestones, from Spike Lee's first Best Picture nomination to Roma becoming the first Spanish-language foreign film to be nominated. Bohemian Rhapsody, meanwhile, is the highest-grossing music biopic of all time, making $800 million at the worldwide box office, per People.

Bohemian Rhapsody star Rami Malek, also nominated for Best Actor, is thrilled that the movie has become so beloved by fans. “Unlike I’ve ever expected to feel in my life,” Malek told The Los Angeles Times of his reaction to its success. “I think this just never quite seemed within my reach. This is something that happens to other people! So the shock of it happening is quite euphoric, it’s otherworldly, it’s breathtaking.”

He also shared that he has the greatest appreciation for the late Queen singer and intends to honor his memory with the film’s multiple Academy Award nominations. “I take every moment to honor him. The greatest appreciation I have is for him, and there’s no way of ever telling this story without him being such a revolutionary, special human being... so it’s always going to be him," Malek added.

However, not everyone is happy with the film's reception. Bohemian Rhapsody has been criticized for the changes it makes to Mercury's life story, and GLAAD rescinded the movie's nomination for its own Outstanding Film — Wide Release category, following new sexual misconduct accusations against Bryan Singer, who is still credited as director despite being replaced before the end of filming, as The Hollywood Reporter reported last December. (Singer denied all misconduct allegations in a statement, as reported by Deadline.)

Regardless of the swirling controversy, the movie is a frontrunner, particularly in Malek's category. And there's still time to watch it before the Oscars.