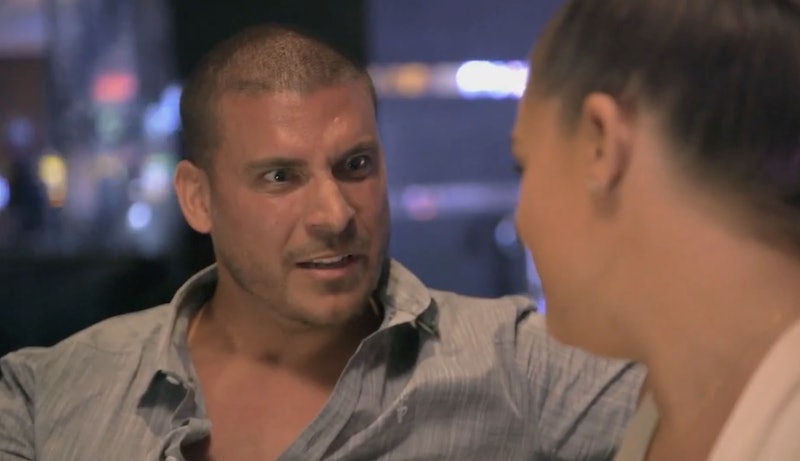 If you think Vanderpump Rules Season 6 can't get more dramatic than Jax Taylor cheating on Brittany Cartwright with Faith Stowers, then you clearly haven't watched the supertease for the rest of the season. By the end of it, you'll be asking yourself, "Is Brittany Cartwright pregnant?" Seriously, the mid-season trailer makes it sound like a Brittany and Jax baby is a possibility. Bustle has reached out to Brittany's rep for comment, but did not receive a response at the time of publication.

Around the one-minute mark, you'll see a scene transpire quickly between the couple, which has the SUR bartender asking his girlfriend, "Are you pregnant?" Yes, his eyes bulge out of his head just like when Brittany's mom showed up in Los Angeles as a surprise courtesy of Kristen Doute. Then, Brittany pulls out a pregnancy test from her purse and hands it to Jax.

The pregnancy test could mean many things, including that Brittany isn't pregnant. Maybe the SUR server thought she was and decided to share the news with Jax — and in a casino of all places. Fans will just have to wait until this particular episode airs to learn exactly what is happening with Brittany, Jax, and that pregnancy test.

It's no secret that Brittany wants to have kids sooner rather than later. She's always wanted to become a mom and she's made that clear to Jax on more than one occasion. But, based on the evidence outside of this trailer, it sure doesn't appear that she is currently expecting a baby.

Based on photos of the cast in Mexico (this trip is also shown in the supertease), it seems Pump Rules Season 6 was filmed over the summer of 2017. So, if Brittany informed Jax of her pregnancy last summer, well, it probably would've made headlines by now, and there's a good chance she would have opened up about it on social media or in interviews. After all, based on the timeline, she would have been around seven months along by now.

Whatever is going on with Brittany and Jax, one thing remains clear: The rest of this season is going to be beyond wild. That's right, viewers have more drama to look forward to. For example, the teaser hints at another cheating scandal. It looks like Katie Maloney is saying to her good friend Kristen while they chill on the beach, "Tom said that you and James hooked up." Then, a second later, a totally different scene shows James yelling, "I don't cheat on my girlfriend!"

Oh, and that's not all. There's an extremely small chance that Lisa Vanderpump fires Jax from SUR once and for all (yeah, right). At the end of the video, Jax starts yelling, "F*ck you, all!" As Lisa tries to calm him down, he says to her, "You should've fired me ages ago." To that, the Real Housewives of Beverly Hills star replies, "Why don't I start now?" Before storming out of SUR and punching a payphone, Jax screams, "Tell the f*cking truth!" It's unclear who he's saying that to or why he's so angry, but maybe he needs to meet up with his reiki specialist, who as Brittany tells Lisa in the teaser Jax "really likes".

Finally, if you were worried that Tom Sandoval and Tom Schwartz were going to screw up their chances even more to help bring Tom Tom to life with Lisa and Ken Todd, well, you better start worrying even more. As showcased in the teaser, Lisa isn't happy with them and they even seem to miss an important meeting with her and Ken. Oof.

To experience all of this for yourself, you can watch the epic midseason teaser here.