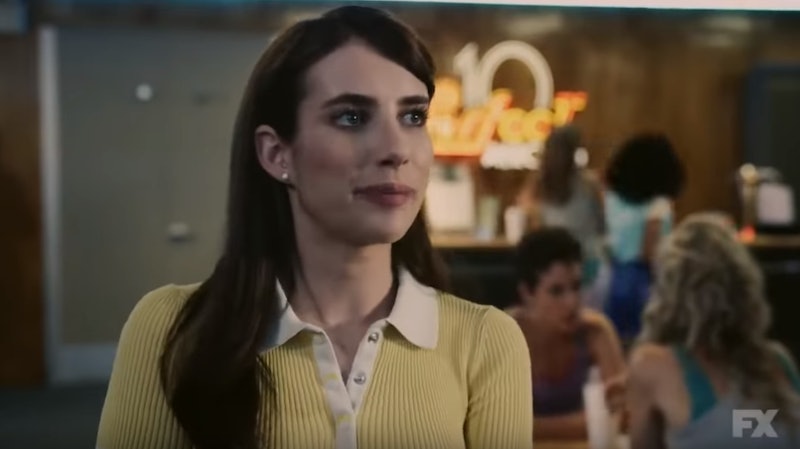 At this point, American Horror Story fans know the show's universe is connected. Season 8's Apocalypse was the most explicit, including a number of callbacks to previous seasons as well as reappearances from old Coven characters. But now, one AHS: 1984 theory is taking it a step further, suggesting that Season 9's Brooke Thompson is actually Coven's Madison Montgomery, both of whom are portrayed by Emma Roberts in separate seasons.

Brooke is the timid, innocent Camp Redwood counselor who was coerced into the job by her friends — quite the opposite of Madison, the renowned Coven witch and Hollywood starlet who once killed a director by crushing him with a spotlight. If the theory that the story we've seen play out in 1984 thus far is actually a movie and all of the characters are actors proves true, that would mean Madison could simply be playing Brooke in a film.

A particular scene from Apocalypse is the main source of this theory. In Episode 4, "Could It Be... Satan?" Michael Langdon visited Madison in her own personal hell: the department store where she worked as a cashier. A grouchy customer recognized her, and she mentioned that before being sentenced to eternal suffering, she was gunning for a role in what could have been a major horror movie.

"I was up for a very substantial role in a Mike Myers film," she said. Not long after that, Langdon brought her back to life. If 1984 takes place after Apocalypse (this theory suspects it does), she would've been around to play the part.

However, there's one major hole in this theory. It assumes Madison was referring to the serial killer Michael Meyers of the Halloween slasher series, and not the actor Michael Myers of Austin Powers. They're two very different people, and if she was referring to a comedy, not a horror movie, the theory holds a lot less weight. Given the genre of AHS and the fact that Madison is a witch, though, something in the vein of Halloween seems more up her alley.

The 1984 teasers released ahead of the season may also subtly allude to this theory. The videos were pretty obviously set up as a retro camera test — a black and white number nine flashed on the screen before each actor individually meandered toward a visible tape mark on the floor in front of what might have been a green screen. Brooke was the first to skip before the camera in her pastel aerobics spandex and leg warmers. At first, she seemed in character, smiley and wide-eyed. But then, for a split second, what could've been Madison revealed herself. Upon looking around at her surroundings, her face read confused, then annoyed — a very Coven moment. Almost immediately, she reverted to her original timid demeanor. It could have been an intentional break in character that foreshadowed what's to come.

So far, that's the only evidence backing up this theory, but AHS creator Ryan Murphy is kind of the king of twists. If it's not the fact that Brooke is actually Madison, expect at least one big surprise before season's end.