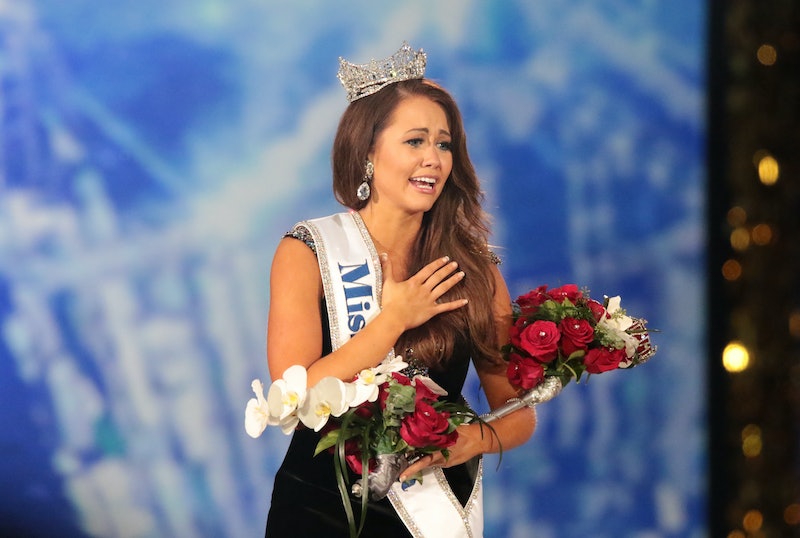 Each year during the Miss America pageant, the reigning queen usually shows up during the competition to oversee the crowning of her predecessor. But during the 2019 Miss America pageant, viewers were quick to notice that 2018's winner, Cara Mund, seemed to be missing. So did Cara Mund attend Miss America 2019? The reigning champ recently ruffled feathers in the pageant world after publishing an inflammatory letter in which she claimed that the organization's chair and CEO "have systematically silenced me, reduced me, marginalized me." Nevertheless, Mund came out on stage for the customary crowning.

Mund addressed her letter to her "Miss America Sisters" when she posted it on her public Facebook page on Aug. 18. The letter started off with Mund explaining that she wanted to make a statement as her reign as Miss America came to a close. The 2018 Miss America took aim at the pageant's chair, Gretchen Carlson, and CEO Regina Hopper, who Mund claimed had instructed her to speak about limited topics, including Gretchen Carlson's involvement in the #MeToo movement, while urging her to stay silent on others.

Mund's letter noted how her treatment resembled "workplace bullying." Mund described an example of subtle bullying on a trip to Orlando, saying, "I watched as the board members and staff sat up front for a meeting with the contestants and state directors, while I was told to go stand in the back of the room and not say anything."

The Miss America Organization issued a statement to The New York Times in response to Mund's letter, saying, "It is disappointing that she chose to air her grievances publicly not privately. ... We are reaching out to her privately to address her concerns.” In light of Mund's Facebook letter, some fans on Twitter used the hashtag #StandWithCara while commenting on the pageant winner's absence.

Finally, during the last 10 minutes of the two-hour show, Mund appeared on stage to give her final walk as Miss America. As usual, a voice recording with Mund's final thank-you's played. Then, a video of the now former Miss America from North Dakota showed her saying that her future plans include attending law school and becoming the first female governor of North Dakota. The overall appearance seemed to move quickly and left many viewers feeling sorry for Mund.

Mund, however, had expected that her time spent on stage during Sunday night's show would be brief. In an interview with The Press of Atlantic City on Aug. 6, she expressed dissatisfaction with her time spent as Miss America. In her Facebook post 12 days later, Mund wrote about the repercussions of that interview, writing, "As I expected, the retribution was swift. Within 72 hours, I was told my final farewell as Miss America would be cut to a total of 30 seconds for the national telecast."

Mund isn't the only former Miss America to speak publicly about her discontentment with the pageant's board. In August, former Miss America winner Caressa Cameron-Jackson appeared on Good Morning America, claiming that she and 18 other former Miss Americas had jointly requested that the board of trustees, Carlson, and Hopper leave the organization. Whether or not Mund will continue to speak out against the Miss America Organization remains to be seen. Now that she's officially no longer the titleholder, she might make even greater waves in the pageant world.