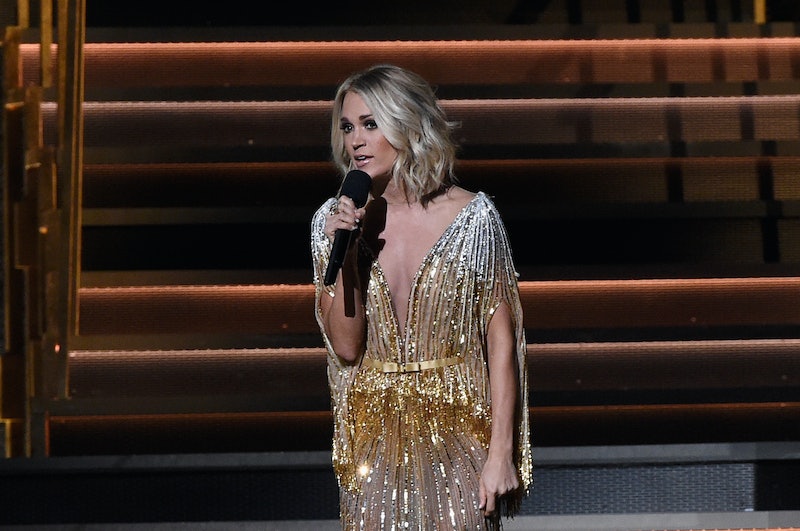 With the Grammys so close that I can taste them — or hear them? that probably makes more sense — I'm sure you're all gearing up to have a bunch of opinions on the winners and the losers and the snubs. But what about the performances themselves? Specifically — is Carrie Underwood lip-syncing at the Grammys? Lip-syncing always tends to be a hot-button issue at these kinds of award shows, with really any performance having the potential to spawn long, drawn-out arguments on social media between supporters and detractors, most of whom weren't actually in attendance for the performance in question. Underwood was announced as a performer at the Feb. 12 ceremony, and while she understandably hasn't issued a statement one way or the other as to whether she'll be lip-syncing or going au naturel, it's highly unlikely that the country artist will do much beyond employing a few choice background vocals for support, at the very most.

And that's because, beyond Underwood's own feelings about lip-syncing, whatever they might be, the controversial practice is frowned upon by the production team behind the Grammys themselves. And not just frowned upon — straight up not allowed. In 2012, the Grammys' Audio Coordinator Michael Abbott spoke with TV Technology to try to clear up some misconceptions about the issue. He said,

"The first thing I want to point out is that, unlike almost every other televised awards show in the U.S., the Grammys are committed to having every microphone on stage be live. That dates back to the Milli Vanilli controversy."

He's referring to the scandal in 1990 when Milli Vanilli had their Grammy stripped from them after it was revealed that the group's members, Fab Morvan and Rob Pilatus, didn't actually sing on the album "Girl You Know It's True," and had been lip-syncing at any and all performances. From that very embarrassing point forward, the Grammys had a vested interest in ensuring that artists were doing as much live singing as possible, with the understanding that there are certain technical elements required in production to help performers sound their best.

"While we don’t allow lip-synch on the show, some performances are so demanding in terms of sound design that there has to be some of what we call track augmentation, which might involve Pro Tools or some other kind of playback. We do allow the artist to have their vision of what they should be looking and sounding like produced accurately, just as they do in concert."

Ultimately, I think what he's saying is that everyone involved with the Grammys has the same goal — to create an evening that showcases the performers and pleases the audience, without misleading anybody. Abbott does reference several performances that were entirely "live," citing performers like Adele, Paul McCartney, Taylor Swift, the Foo Fighters, Jennifer Hudson, and the Beach Boys reunion, but the fact that he limits the list to what he can name on two hands should be a good indicator that most artists get at least a little bit of background support.

It's a big space to fill, that auditorium, not to mention every living room that's tuning in to the ceremony, so there ain't no shame in beefing things up a bit so that the sound quality comes through just as it would if you were right there in the room with Underwood, getting blown away by her powerful voice.

That's what we're all tuning in for, after all. So far be it for me to begrudge the production team for a little sprucing up, especially with the promise that the Grammys team is just as opposed to full-out lip-syncing as I am.