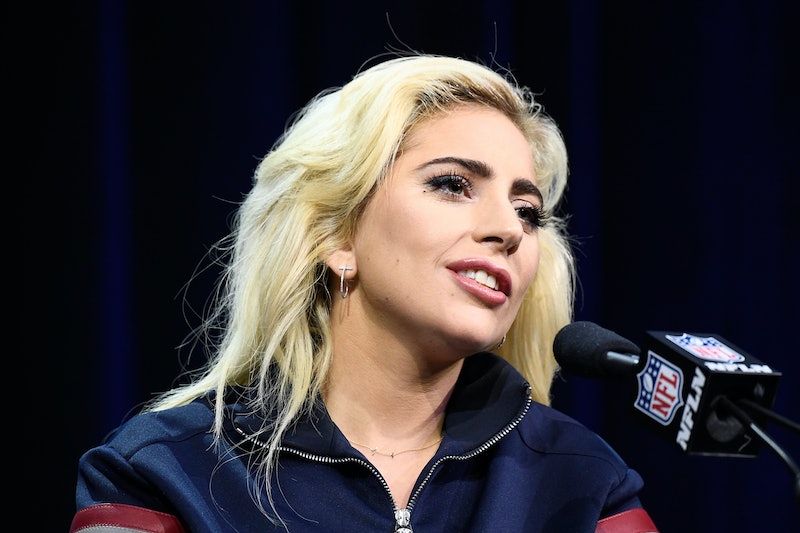 As many scramble to prepare wings and dip for this weekend's football festivities, I've found myself more interested in figuring out exactly what to expect from this year's halftime show. And the biggest question for me right now is: Is Lady Gaga lip-syncing at the Super Bowl? I mean, nachos are obviously super important too, but you have to admit, it's a pretty valid thought, right? I mean, the Super Bowl is a pretty big gig, and many have, in fact, tried and failed at performing live at the game in front of literally more than a hundred million fans. And, this is no shade to Gaga at all, but I'm wondering if she'll be able to actually pull this thing off.

Update: True to her beliefs about lip synching, Lady Gaga didn't lip sync at Super Bowl LI. In fact, Mother Monster made it fairly obvious when she was singing versus when the track of the song was playing, and, despite leaping off a roof and dancing with such passion that even Beyoncé would be jealous, she sounded absolutely amazing live. But, really, who doubted that she would?

Earlier: So, as a means of research, I recently re-watched the "Poker Face" singer's big National Anthem performance from Super Bowl 50 last year, and I'll be the first to admit — it was absolutely phenomenal. However, the jury's still out on whether or not Gaga's outstanding mastery of "The Star-Spangled Banner" was actually a live performance or lip-synced over a pre-recorded track. And, I'm in no way saying that lip-synching at the Bowl is a crime by any means. Many great performers (Whitney Houston, Madonna, Janet Jackson) before her have, or should have (Christina Aguilera), mouthed their lyrics in the past.

It's actually quite typical that an artist opt for lip-syncing on a stage this large. There are just far too many factors that need to be considered when dealing with such a huge venue and live singing under such conditions can actually turn out to be quite disastrous, if things should happen to go awry. And I can only imagine what kind of backlash a horrible performance would bring about from fans and critics, so I'm really hoping that Gaga makes the best decision for Sunday's big game.

And while there's no real evidence to suggest that the Born This Way performer will actually voice her words live on the Super Bowl 51 stage, the 30-year-old entertainer has made it known in the past that lip-syncing is totally not her thing. In a 2014 interview with Extra TV, the songstress revealed her thoughts on the subject. She said,

“I don’t think it’s cool to lip sync. I’m not judging if people do, because it’s everybody’s own style of what they decided, the type of artist they will be. I think if you pay money for a ticket to see a show that the artist should f*cking have some pipes and sing their records for you.”

Judging by her strong feelings on the matter, it sounds like she just may be going it live. Either way, good luck, Gaga.