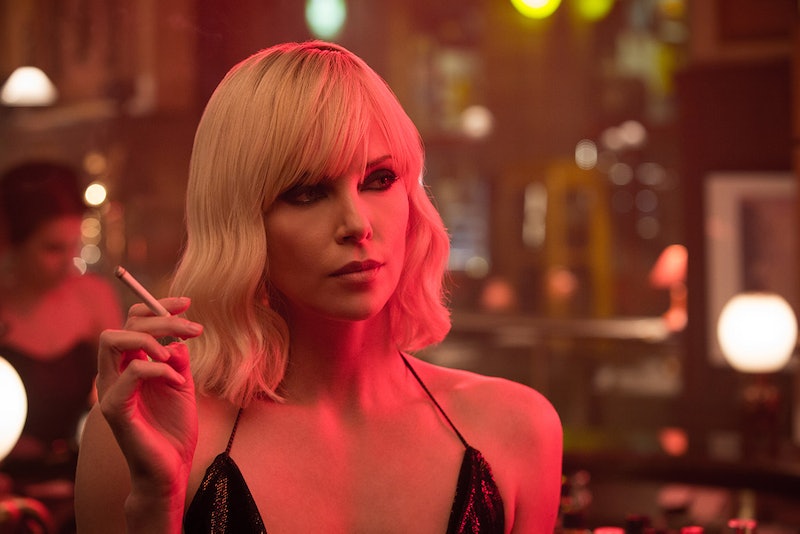 After her recent films Mad Max: Fury Road and The Fate of the Furious, Charlize Theron is continuing her transition into full-blown action star with her most intense role yet, portraying superspy Lorraine Broughton in Atomic Blonde. The Cold War thriller takes place in 1989 on the eve of the fall of the Berlin Wall and sees Lorraine caught up in an intense game of international espionage, but did it really happen? Is Charlize Theron's Atomic Blonde character a real spy?

She's not. Like James Bond, Lorraine Broughton is a completely fictional MI6 agent. She was created by writer Antony Johnston for his 2012 Sam Hart-illustrated graphic novel The Coldest City, on which Atomic Blonde is based. Johnston is no stranger to writing action-packed characters; he's penned Daredevil and Wolverine comics for Marvel, created the comic series Wasteland, and has written the stories for video games like Shadow of Mordor and The Dead Space series. But with Atomic Blonde heading to theaters with megastar Theron attached, it seems like Lorraine Broughton is his most significant creation to date, as the character's hard-drinking, lethal precision, and suave demeanor have many fans opining that she is the equivalent of James Bond for a new generation.

This comparison isn't lost on Theron, who recently broached the subject of herself portraying a female James Bond in a future gender-swapped version of the character. While she was flattered by the suggestion, she doesn't really think it's necessary since Lorraine is just as badass as Bond — if not more so. "I think of this character [in Atomic Blonde] as something that could hopefully live and breathe in the same kind of format [as Bond]," Theron said at the Comic-Con Women Who Kick Ass panel, according to IndieWire's Ben Travers. "We could actually make a couple of more movies. I’m fine with leaving [Bond] over to Daniel [Craig] or Idris [Elba], and I’ll do Lorraine."

So James Bond had better watch his back, because there's a new MI6 superspy in town who's about to take over Hollywood, and her name is Lorraine Broughton.