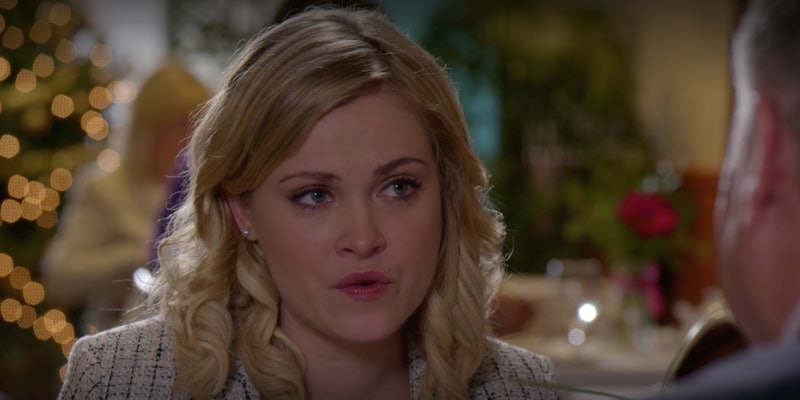 'Tis the season to watch every made-for-TV Christmas movie and not overthink their plots. Historically, the Hallmark and Lifetime channels have ruled the feel-good Christmas movies market, but this year, Netflix is joining the Christmas scene in a big way. On Dec. 15, Christmas Inheritance will hit the online streaming site, and it looks like a combination of The Simple Life and Eloise at Christmastime. And although Christmas Inheritance isn't a true story, its protagonist, Ellen, might remind you of some real-life heiresses out there.

Christmas Inheritance follows a socialite named Ellen Langford, who starts off as the life of a party. In the trailer for the film, Ellen asks her father about inheriting his company, and he gives her the task of delivering a letter to someone in his small hometown conveniently named Snow Falls. If this sounds like something straight out of a Hallmark Channel Christmas movie, where towns often have names like "Santa Claus," that's because it is. In fact, Hallmark has a 2015 movie called Charming Christmas that may resemble Netflix's Christmas Inheritance, but that doesn't mean the new film still isn't worth watching.

For one thing, Ellen seems to be what some might call a "hot mess" before visiting Snow Falls, making plenty of mistakes and falling into trouble. The spirit of Christmas and the rural town's charm remind her what really matters, though. Hint: it's not booze and money. And the resulting movie is definitely fun to watch.

Since Netflix's first original Christmas movie they released this year, A Christmas Prince, has become such a huge hit, fans of the genre should definitely check out Christmas Inheritance. Both movies not only have Christmas in common, but they also have the themes of wealth and unlikely love. You didn't think that Ellen would go to Snow Falls and not fall in love with a rustic, humble man, right?

Perhaps Christmas Inheritance will cause as much of a stir as A Christmas Prince has. The cheesy, heartwarming love story has captivated countless people over the last several weeks, so much so that Netflix itself has joined in on the conversation. In mid-December, the company's US Twitter account tweeted a hilarious message to all the people who seem to be watching A Christmas Prince on repeat. Apparently, even the production company that created the movie didn't anticipate its huge success, and is amused by the reactions the film is receiving now.

If you just take two minutes to watch A Christmas Prince's trailer, though, you'll realize that it's just the combination of two of everyone's favorite things: Cinderella, and Christmas. The film follows a writer who goes undercover at a palace and ends up falling in love with Prince Charming and while, OK, it's not quite Cinderella, and it's not even that Christmasy, it has all the makings of a cheesy romance that so many people secretly love to watch unfold. Or not secretly, now that Netflix put those 53 people who watched A Christmas Prince every day on blast like that.

Hopefully Christmas Inheritance will also nail the balance between being a feel-good Christmas movie and a heart-fluttering romance, just like A Christmas Prince did. Netflix might be an unexpected place to find such Hallmark-like movies, but that's kind of perfect considering that its two original romantic Christmas movies from this year both center around finding love in unlikely places. Maybe this Dec. 25, Netflix is the world's proverbial Christmas Prince, who reminds us about what really matters in life: love. Yes, it's cheesy, but if you secretly love it, then you should definitely check out Christmas Inheritance.