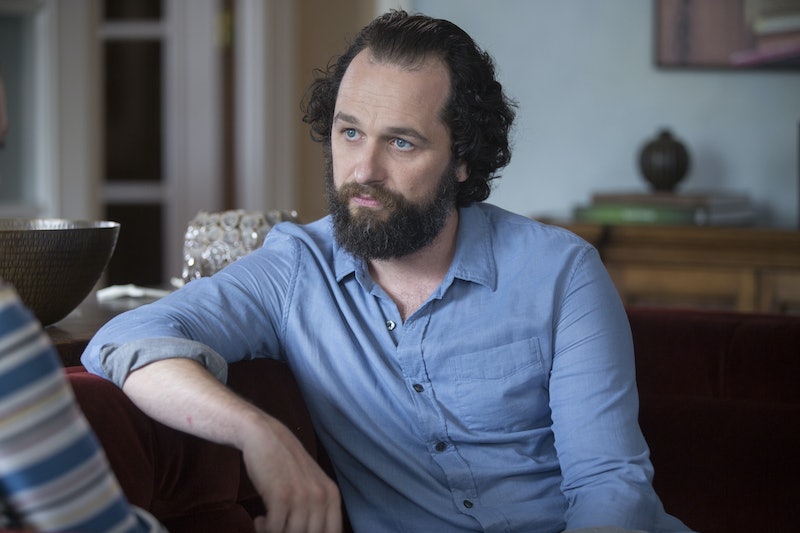 Girls creator and star Lena Dunham has been a vocal advocate for victims of sexual assault and in the final season of her HBO show, she has dedicated an entire episode to the topic. After Hannah writes an article accusing author Chuck Palmer of sexual assault on Girls, the very famous writer invites Hannah over his home to confront her about it in the third episode of Season 6, "American Bitch." The entire episode takes place in his home and it will inevitably cause controversy as Hannah and Chuck argue over consent and power in regards to sexual assault. The Americans actor Matthew Rhys portrays this literary icon, so no, Chuck Palmer is not a real person. However, that doesn't make their heated discussion any less real or relevant, particularly in the current social climate and that's very intentional.

During Chuck's book tour, he allegedly had non-consensual sexual encounters with female college students. Four different women accused Chuck of sexual assault, with the most prominent one taking to Tumblr to post about it. Hannah wrote an impressive article about these allegations against this writer that she admires from the perspective that they were true, which is why Chuck called her to his home. He notes that these allegations are heresy and how his reputation has been damaged because of non-journalistic articles like Hannah's. He's particularly concerned with what his daughter will think of him and viewers experience the same back and forth emotions of being disgusted by Chuck and then charmed by him, just like Hannah.

Welsh actor Rhys called the script for the Girls episode an "age-old debate about society, men and women, the dangers of the world" to WalesOnline and while that's completely accurate, it also feels extremely pointed at this time in history. And although it is extremely important to distinguish Dunham from her fictional character Hannah Horvath, Dunham's commendable outspokenness about advocacy for sexual assault victims does make you wonder if Chuck Palmer is based on a real person — perhaps even a real person that she has encountered in the elite circles of the entertainment industry or literary world.

But in an interview with The New York Times alongside Girls executive producer Judd Apatow, Dunham referred to the "American Bitch" episode and said how it is not based on her time in Hollywood:

"We have an episode this season about male creative figures abusing their power. And people have asked if it's based on my experience in Hollywood. I'm like: 'No. I work with Judd Apatow.' I don’t even know what I would have to do to get him to look below my neckline."

As for prominent literary figures, I did not find writings from Dunham that specifically talked about a famous writer accused of sexual assault, so there's no direct correlation between her and what Hannah experiences. Unfortunately though, there are real-life accounts of writers being accused of sexual assault that are similar to the story in "American Bitch." Perhaps the most relevant is that of Canadian novelist Steven Galloway. He was fired from being the chair of the creative writing program at the University of British Columbia after allegations of sexual assault and harassment from a student at the university. Galloway claimed he had a consensual relationship with the student and apologized, according to a statement released to The Globe and Mail.

The fact that Galloway is a famous novelist dealing with a damaged reputation due to sexual assault allegations from a college student (not to mention, he was a divorced parent at the time of the alleged assault) might make you see why I can draw perfunctory comparisons to him and the fictional Chuck Palmer. Yet, at the time of this article being published, neither Dunham nor Girls showrunner Jenni Konner had said in interviews that Chuck is based on Galloway or any other specific person. And I don't think that Chuck is supposed to be. Instead, Chuck Palmer represents the pervasiveness of sexual assault in our culture — typically by men in power assaulting women in lower positions — and "American Bitch" is highlighting how the truths of who did what to whom are rarely clear.

Chuck is making the case that Hannah didn't know the whole story and shouldn't have assumed the women who accused him were in the right. And Hannah is making the case that women who make sexual assault accusations should be listened to and not brushed aside. As Chuck reasons, what did or did not happen with his accuser Denise are just about him, but Hannah makes the point that there is a "larger significance." Even though Chuck doesn't appear to be inspired by a real person, the fact that this debate continues to exist and that people who speak out about abuse are typically doubted is the real truth about sexual assault. And just like Dunham highlights in "American Bitch," that ambiguity will continue to exist until our culture drastically changes, even for a person as sick of gray areas as Hannah Horvath.