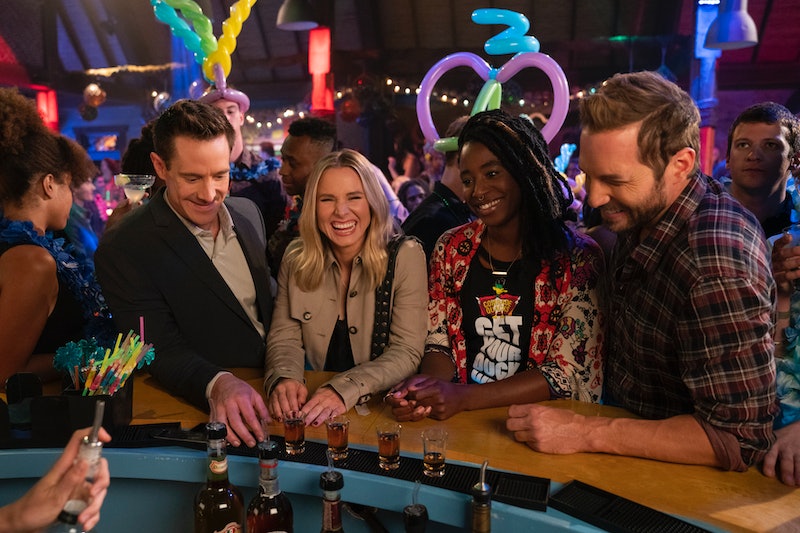 Thanks, in part, to its dedicated fanbase, Veronica Mars has been revived on Hulu for a fourth season and is filming in all new locations in Los Angeles. With the show making a miraculous return, fans may be keen to check out all of Veronica's new Neptune haunts IRL. Those thinking of hitting up Season 4's uproarious spring break club should temper their expectations though — whether Comrade Quacks in Veronica Mars is a real place you can easily visit is a tricky question.

Fandom is a multifaceted experience, and the way fans show appreciation for their favorite show can range from writing fan fiction, to attending conventions, to even visiting the IRL filming locales. Veronica Mars is one such passionate fanbase. The fans fundraised for a sequel film in 2013 in less than 11 hours, and have endlessly campaigned for the show's return since it was canceled in 2007.

They've created guides on how to stay in the San Diego inn that once served as the Mars' apartment during the original series, and made an actual Google Map of all Season 1 through 3 locations for those looking to walk in Veronica's shoes for a day.

The earlier seasons were pretty much a love letter to San Diego, but Season 4's locales are a bit harder to pin down. Neptune is a fictional city acting as a sort of stand-in for Orange County, but some of Season 4's locations are very real, such as the Sea Sprite Hotel and Hermosa Beach in LA.

Executive producer Dan Etheridge confirmed to The Beach Reporter that they did film at a few places around Hermosa Beach. "With that location [Sea Sprite Hotel] as a home base, we have been able to also use many other terrific locations down there, including restaurants, parks, and, of course, the beach and Strand," said Etheridge.

Comrade Quacks, the raucous club of Veronica's new BFF Nicole, doesn't seem to be among those places though. While Comrade Quacks becomes almost as central of a character in Season 4 as the rest of the cast, it sadly also appears to be totally fictional, though the name is obviously a play on Senor Frogs, in Cancun, Mexico, a popular Spring Break location.

The reason for this is likely for practicality and safety. Most of Comrade Quacks scenes take place inside the actual club, and it's a common practice that interior scenes are filmed on a studio lot, like Warner Bros.' in LA. This allows the creators to be able to control the audio better, set up cameras and lighting, and not have to worry about running over their permit for that location.

But fans shouldn't feel totally bummed just yet. Warner Bros. and Universal Studios Hollywood are constantly updating the sets that they tour visitors through, and they have a history of featuring a mixture of TV shows and films. Universal Studios recently had the whole downtown set of Kristen Bell's other hit show The Good Place as part of their lot tour. The Warner Bros. tour heavily featured Stars Hollow from Gilmore Girls last year. Like Veronica Mars, Gilmore Girls is another CW show that later found new life on a streaming platform. With Veronica Mars now more relevant than ever, fans will just have to cross their fingers and hope that soon, they'll be able to cruise on through Neptune and see Comrade Quacks for themselves.