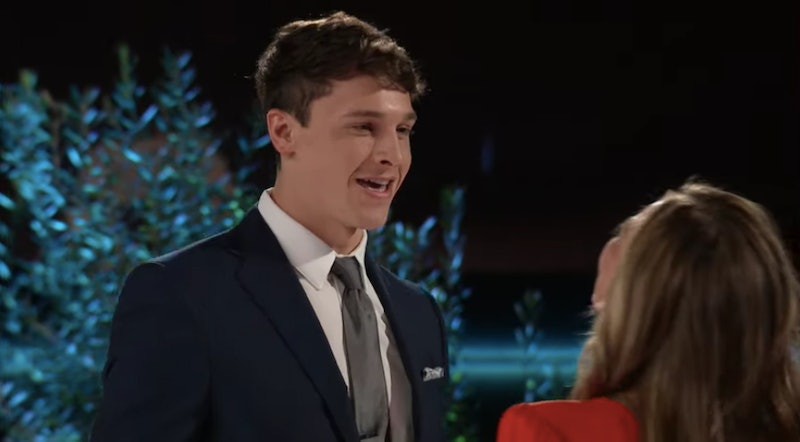 It feels like it's been ages since Connor S. had his one-on-one date with Hannah B. on The Bachelorette. And that technically wasn't even an official date since she wasn't feeling well at the time and had to cancel their plans. Aside from that, their alone time together has been pretty nonexistent, which could mean he won't be sticking around much longer. However, figuring out if Connor S. is single after The Bachelorette is somewhat complicated — mostly due to the fact that he's not allowed to reveal his current relationship status until his time on the show is over. (The Bachelor franchise tries its best to keep spoilers at a minimum.)

That being said, it's somewhat easy to make a guess about any ongoing romances in his life, or lack thereof. Considering that filming for the season didn't happen all that long ago — and Connor S. has made it significantly far in the process — he hasn't really had a whole lot of time to get involved in a new relationship. So either he ends up with Hannah at the end of all this, or he's still on the market. And based on the strong connections Hannah B. has made with so many of the other contestants outside of Connor, odds are it ends up being the latter.

Of course, at this point, this is all pure speculation. Connor has yet to confirm whether or not he's dating anyone, nor has he made any indications on social media about if he'll be appearing on Bachelor in Paradise Season 6. Only when/if he gets eliminated can fans expect either of those announcements to occur. Heading to Paradise would confirm that he is, in fact, single, though it's hard to imagine he would be for long after a little time with some other Bachelor Nation alums.

During his time on the show and the limited screen time he's been given in this Luke P.-centric season, Connor S. has proven to be quite the catch. After Hannah B. had to cancel their date, he handled the situation really well. He didn't get mad about any of it or complain that it was unfair. He simply went to visit her for a little while in bed and then, once she fell asleep, proceeded to leave little post-it note messages all around her place for her to find when she woke up. The notes were various compliments focused on what he likes about her.

The gesture was small, but you could tell it meant a lot to Hannah, which is probably a big part of why she's kept him around. Hannah has had to deal with quite a bit of drama this season, so Connor's uncomplicated and easy-going personality has undoubtedly felt like a breath of fresh air. So even if he doesn't end up with that final rose, it wouldn't be all that surprising for him to find someone special in the near future. Guys like him don't usually stay single for long.